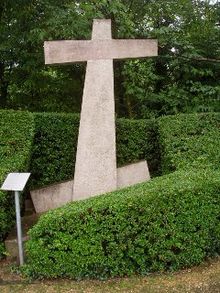 The 1356 Basel earthquake is the most significant seismological event to have occurred in Central Europe in recorded history and had a moment magnitude in the range of 6.0–7.1. This earthquake, which occurred on 18 October 1356, is also known as the Séisme de la Saint-Luc (English: Earthquake of Saint Luke), as 18 October is the feast day of Saint Luke the Evangelist.

After a foreshock between 19:00 and 20:00 local time, the main earthquake struck in the evening at around 22:00, and numerous aftershocks followed through that night. Basel experienced a second, very violent shock in the middle of the night. The town within the ramparts was destroyed by a fire when torches and candles falling to the floor set the wooden houses ablaze. The number of deaths within the town of Basel is estimated at 300. All major churches and castles within a 30 km (19 mi) radius of Basel were destroyed.

The seismic crisis lasted a year. The modeling of the macroseismic data suggests that the earthquake's source had an east–west orientation, a direction corresponding with the overlapping faults on the Jura Front. On the other hand, recent paleoseismologic studies attribute the cause of this earthquake to a normal fault, oriented NNE-SSW and south of the town. The significant magnitude of the event suggests a possible extension of this fault under the town.

Due to the limited records of the event, a variety of epicenters have been proposed for the earthquake. Some of the proposed locations include faults beneath the Jura Mountains or along the Basel-Reinach escarpment. Another study placed the epicenter 10 km (6.2 mi) south of Basel.

The earthquake was felt as far away as Zürich, Konstanz, and even in Île-de-France. The maximum intensity registered on the Medvedev–Sponheuer–Karnik scale was IX–X (Destructive–Devastating). The macroseismic map was established on the basis of damage reported by the region's 30 to 40 castles.

The earthquake destroyed the city of Basel, Switzerland, near the southern end of the Upper Rhine Graben, and caused much destruction in a vast region extending from Paris to Prague. Though major earthquakes are common at the seismically active edges of tectonic plates in Turkey, Greece, and Italy, intraplate earthquakes are rare events in Central Europe. According to the Swiss Seismological Service, of more than 10,000 earthquakes in Switzerland over the past 800 years, only half a dozen of them have registered more than 6.0 on the Richter scale.