The 1959 Hebgen Lake earthquake (also known as the 1959 Yellowstone earthquake) occurred on August 17 at 11:37 pm (MST) in southwestern Montana, United States. The earthquake measured 7.2 on the Moment magnitude scale, caused a huge landslide, resulted in over 28 fatalities and left US$11 million (equivalent to $96.48 million in 2019) in damage. The slide blocked the flow of the Madison River, resulting in the creation of Quake Lake. Significant effects of the earthquake were also felt in nearby Idaho and Wyoming, and lesser effects as far away as Puerto Rico and Hawaii.[page needed]

The 1959 quake was the strongest and deadliest earthquake to hit Montana, the second being the 1935–36 Helena earthquakes that left four people dead. It also caused the worst landslides in the Northwestern United States since 1927.[page needed]

The earthquake occurred at 11:37 p.m. (MST) with a magnitude of 7.2 Mw . The U.S. Weather Bureau reported that the quake lasted 30–40 seconds. During the earthquake the surrounding landscape dropped as much as 20 feet (6.1 m) and shockwaves caused numerous seiches to surge across Hebgen Lake for 12 hours. Water pushed by the seiches poured over the dam which did not collapse. Several aftershocks ranging from 5.8 to 6.3 were reported after the quake.

The earthquake struck in Madison Canyon, an area to the west of Yellowstone National Park. Several nearby campgrounds were occupied by vacationing campers and tourists at the time.

The landslides caused by the quake carried 50 million cubic yards (38 million cubic metres) of rock, mud and debris down into the valley and created hurricane-force winds strong enough to toss cars. In Madison Canyon, the landslide swept away a family of seven, five of whom perished. Two more fatalities were also reported in nearby Cliff Lake to the south. In Rock Creek, tourists camping there were caught off guard by the quake and landslide, which swept them into the creek. The earthquake caused a seiche which inundated trailers and tents, uprooted trees, and injured one additional person.[page needed] 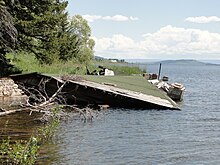 House destruction from the earthquake, July 2009

New geysers and cracks sprouted up in nearby Yellowstone National Park. Near Old Faithful, the earthquake damaged the Old Faithful Inn, forcing guests there to evacuate. Landslides caused by the quake blocked a road between Mammoth and Old Faithful, damaging a bridge inside the park. There was one reported injury when a woman broke her wrist. The earthquake also created fault scarps as high as 20 feet (6.1 m), causing extensive damage to roads, homes, and buildings. In Belgrade, Montana the earthquake damaged measuring equipment placed in a 100-foot (30 m) water well. The quake also knocked out telephone communications between Bozeman and Yellowstone, with the city of Bozeman itself suffering moderate quake damage to homes and buildings. Buildings at the Montana State University campus also sustained quake damage.[page needed] In Butte, the quake caused a pendulum clock to stop at 12:42 a.m. (MST) and caused minor damage to homes.

Areas around Hebgen Lake were also affected as the quake caused parts of the lake to rise eight feet (2.4 m). Roads and highways running along the shores of the lake collapsed into the water.[page needed] In Ennis, most residents were evacuated due to concern Hebgen Lake might flood the town. The evacuation was subsequently called off when it became known the landslide had blocked the river's flow. In West Yellowstone, the earthquake damaged a courthouse and a railroad station.

The earthquake also caused damage and fatalities outside of Montana. In Raynolds Pass in Eastern Idaho, a landslide killed eight more people. Seismic waves from the quake were reported in Boise and Macks Inn, Idaho, causing minor well and sewer damage. The final death toll from the earthquake was 28, although some newspaper reports suggested the death toll was high as 50–60. US$11 million (equivalent to $96.48 million in 2019) in damage was caused.

The landslide caused by the quake blocked the flow of the Madison River. The blockage caused the water to rise and formed a new lake, which was later to be named Quake Lake (officially Earthquake Lake). Fearing that the pressure caused by the rising water would result in a catastrophic flood, the Army Corps of Engineers began to cut a 250-foot (76.2 m) wide and 14-foot (4.3 m) deep channel into the slide. By September 10, water began to flow through the channel. To prevent more erosion by the flowing water, the Army Corps cut another 50-foot (15.2 m) channel which was completed on October 29. The construction of the two channels cost US$1.7 million (equivalent to $14.91 million in 2019).[page needed]

Amateur radio operator K7ICM transmitted news of the quake at 11:43 p.m. (MST). At 11:50 p.m., another amateur in Idaho contacted the Idaho State Police who in turn contacted their headquarters in Boise. The Montana Highway Patrol, Montana State Civil Defense and the Montana Department of Fish, Wildlife and Parks also received word of the earthquake and its effects. The geography of the area plus the damage from the earthquake disrupted and/or obstructed radio communications, making broadcasting accurate information about the quakes effects difficult.[page needed]

The Yellowstone County Chapter of the American Red Cross, Salvation Army and various other local, national, and organizations from multiple states sent aid to the victims of the earthquake. The Red Cross also set up temporary housing in Bozeman and the Wyoming Department of Health sent 200 trailers to the Yellowstone area to be used as hospitals. Because the majority of the roads in and around the Yellowstone area were either damaged or blocked by the landslides and the quake, equipment and personnel from the United States Air Force and the U.S. Forest Service were brought in to transport the injured to nearby hospitals outside the quake zone and to perform search and rescue missions in Madison Canyon. 300 people trapped in the canyon were rescued.[page needed] Rescuers found five[page needed] to nine bodies in the earthquake zone. Residents from the town of Ennis, were evacuated to Virginia City and Butte.

Road damage from the earthquake, 1959 image

Senators and Representatives Frank Moss (D-Utah), John Baldwin (R-California), Harold Johnson (D-California), Lee Metcalf (D-Montana), Leroy Anderson (D-Montana), Tom Morris (D-New Mexico) and Gracie Pfost (D-Idaho) flew over and surveyed the disaster area. The Senate Interior and Insular Affairs Committee requested Montana Governor J. Hugo Aronson to declare the areas hardest hit by the quake a disaster area. Wyoming Governor John J. Hickey provided help and equipment in the aftermath of the quake. The Montana National Guard was called to the quake area to prevent looting of campsites left abandoned by the quake. The Idaho National Guard were also sent to the quake area. The Montana Highway Department began clearing roads of debris and mud.[page needed] The work was slowed by aftershocks and smaller landslides. On August 19, US Highway 20 and US Highway 191 were reopened while Montana State Highway 1 remained closed. Three bridges in Duck Creek, Cougar Creek and Madison Canyon were repaired and reopened as well. Because of the threat of gasoline spilling into the Missouri River, a local pipeline company built an emergency pumping station. The Montana Power Company surveyed Hebgen Dam and found it sustained minimal damage. Hebgen Lake was completely drained for crewmen to make repairs and to rid it of dead or dying fish. Overall repairs to the Yellowstone National Park amounted to US$2.6 million (equivalent to $22.8 million in 2019).[page needed]

Fifty people including police officers, members of the Red Cross and others held a memorial service a mile north of the slide in Madison Canyon for campers presumed buried under the quake-induced landslide. The services lasted for 15 minutes. After the quake, the U.S. Forest Service built the Quake Lake visitor center on top of the landslide which was completed in 1967. The U.S. Forest Service placed a plaque on one of the boulders that fell during the quake to honor the 19–21 people who were killed during the quake-induced landslide.[page needed]