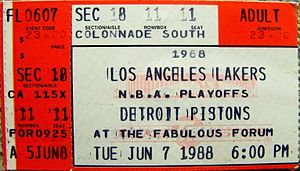 The 1987–88 season saw the Pistons finishing with a franchise-best record of 54–28. In the 1988 NBA Playoffs, they defeated the Washington Bullets 3–2 in the first round, Michael Jordan and the Chicago Bulls 4–1 in the semifinals, and Larry Bird and the top-seeded Boston Celtics 4–2 in the Conference Finals. They would advance to the NBA Finals for the first time since 1956 when the team was based in Fort Wayne, Indiana as the Fort Wayne Pistons, only to lose to the defending and eventual NBA champion Los Angeles Lakers in a hard fought seven games. Isiah Thomas was the only member of the team to be selected for the 1988 NBA All-Star Game.

The Pistons had just dispatched the Celtics in six games, while the Lakers were coming off back-to-back seven-game wins over the Utah Jazz and Dallas Mavericks. The Lakers were tired, and it showed. Adrian Dantley scored 34 points, hitting 14 of 16 shots from the field. The Pistons took control of the game with six seconds left in the first half when Bill Laimbeer hit a 3-point shot to put the Pistons up 54–40. Kareem Abdul-Jabbar then fired an inbound pass intended for Byron Scott, but it was intercepted by Isiah Thomas who let fly with another three-pointer which went in at the halftime buzzer. The Pistons had a 57–40 halftime lead and never looked back, stealing Game 1 with a 105–93 win.

Facing the possibility of going down 2–0 with three games to play in Detroit, the veteran Lakers found resolve with a 108–96 win. James Worthy led the Lakers with 26 points, Byron Scott had 24, and Magic Johnson 23 despite battling the flu.

With Magic still battling the flu, the Lakers got a key win in Detroit, 99–86, to go up 2–1 in games. The Lakers took control of the game in the third period, outscoring the Pistons 31-14. Despite his illness, Magic had 18 points, 14 assists, and six rebounds.

With pride in front of their home fans, the Pistons tied the series at 2–2 with a 111–86 blowout win. The Pistons decided to attack the basket and make Magic Johnson defend. Johnson wound up on the bench early in the second half with foul trouble.

With Magic out of the game, the Pistons built a substantial lead. During timeouts, Bill Laimbeer was almost frantic. He kept saying, "No letup! We don't let up!" They didn't, and blew out the defending NBA champions by 25 points.

Left open by the trapping Lakers defense, Dantley led the team with 27 points. Vinnie Johnson came off the bench to add 16 while James Edwards had 14 points and five rebounds off the bench.

The Pistons' 104-94 victory was a perfect farewell to the Pontiac Silverdome. "I told Joe Dumars with a minute left in the game to look around and enjoy this because you'll never see anything like it again," Laimbeer said. "Forty-one thousand people waving towels and standing. It was awesome."

The Lakers opened Game 5 with a fury of physical intimidation, scoring the game's first 12 points. But that approach soon backfired, as the Laker big men got into foul trouble.

Dantley played a major role in the turnaround, scoring 25 points, 19 of them in the first half, to rally the Pistons to a 59-50 halftime lead. Vinnie Johnson added 12 of his 16 points in the first half to keep Detroit moving.

Joe Dumars added 19 points on 9-of-13 shooting to send the Pistons back to Los Angeles, one win away from their first NBA title.

This game turned out to be a classic confrontation between a team hungry for their first title (Detroit) and a veteran team with their backs to the wall (the Lakers).

The Lakers led 56–48 in the third quarter when Isiah Thomas suddenly began a classic performance. He scored the game's next 14 points, hitting two free throws, a driving layup, four jump shots, and a running bank shot.

On the Pistons' next possession, Thomas stepped on Michael Cooper's foot, rolled his ankle, and had to be helped from the floor. Despite a severe sprain, Thomas returned to the game 35 seconds later and continued his dizzying onslaught. By the end of the third quarter, Thomas had scored 25 points, an NBA Finals record for one quarter, on 11-of-13 shooting. This helped the Pistons gain an 81–79 lead.

The Pistons' momentum carried into the final period as they led 102–99 with a minute left. Byron Scott cut the lead to one with a 14-footer in the lane with 52 seconds remaining. The Lakers then turned up the defense on the Pistons' next possession, forcing Thomas into a desperation 18-footer. Forty-one-year-old Kareem Abdul-Jabbar then got the ball on the Lakers' trip down the floor and posted up Bill Laimbeer for his signature skyhook. As Kareem shot, Laimbeer was whistled for a foul, even though replays showed he barely touched Kareem. Jabbar then coolly sank the two free throws to put the Lakers up 103–102. The lead held up as Thomas, bad ankle and all, missed another shot at the buzzer.

Thomas would end up with 43 points and eight assists, but it was for naught as the series moved to Game 7.

One of the best NBA Finals in recent memory closed out with another classic.

Thomas' ankle was still sore, as evidenced by his limping badly in warmups. He did manage to play the first half, scoring 10 points and leading the Pistons to a 52–47 halftime lead. But, the delay between halves caused the ankle to stiffen, and Thomas could not continue. With Isiah on the bench, the Lakers turned the halftime deficit into a 90–75 lead late in the 4th quarter.

Chuck Daly then went to a faster lineup with Dennis Rodman, John Salley, Joe Dumars, and Vinnie Johnson that created matchup problems for the Lakers and enabled the Pistons to score at a torrid pace. With 3:52 left, Salley canned two free throws to cut the Laker lead to 98-92, sending the Forum fans into a panic.

With 1:17 left, Dumars hit a jump shot to cut the lead to 102–100. Magic Johnson then hit a free throw after a Rodman foul to put the Lakers up by three. On the Pistons' next trip down the floor, Rodman took an ill-advised jumper with 39 seconds left. Byron Scott rebounded and was fouled. His two free throws pushed the lead to 105–100.

After Dumars made a layup, James Worthy hit a free throw and Bill Laimbeer canned a three-pointer, pushing the score to 106–105 with six seconds showing. A. C. Green completed the scoring with a layup off a length-of-the court pass from Magic, making it 108–105, and although the Pistons got the ball to Thomas at midcourt with a second remaining, he fell without getting off a shot.

Worthy racked up a monster triple-double: 36 points, 16 rebounds and 10 assists. For that and his earlier efforts in the series, he was named the Finals MVP.