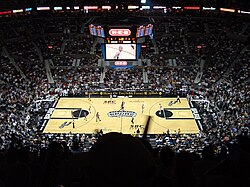 The San Antonio Spurs hosting the Los Angeles Lakers in Game 1 of the 2004 Western Conference Semifinals at the SBC Center.

The 2003–04 NBA season was the Spurs' 28th season in the National Basketball Association, the 31st in San Antonio, and 37th season as a franchise.

The Spurs entered the season as defending NBA champions, having defeated the New Jersey Nets in the 2003 NBA Finals in six games to win their second NBA championship. During the offseason, David Robinson, Danny Ferry, and Steve Kerr retired, Speedy Claxton signed with the Golden State Warriors, Stephen Jackson signed with the Atlanta Hawks, and Steve Smith signed with the New Orleans Hornets; in addition, the Spurs acquired Hedo Türkoğlu and Ron Mercer in a three-team trade, signed free agent Robert Horry (who had won championships with the Houston Rockets and the Los Angeles Lakers) and signed other free agents such as center Radoslav Nesterović. Despite the retirement of Robinson, and despite having a won-loss percentage of approximately .500 in November, the Spurs posted a 13-game winning streak in January and won their final eleven games of the season. The team finished second in the Midwest Division with a 57–25 record. Two-time MVP Tim Duncan was selected for the 2004 NBA All-Star Game.

The Spurs defeated the Memphis Grizzlies in four straight games in the first round of the playoffs. Although the Spurs took the first two games in a second-round rematch against the Los Angeles Lakers (the team they had eliminated in the previous season's Western Conference Semifinals), the Lakers, led by their "big four" of Karl Malone, Shaquille O'Neal, Kobe Bryant, and Gary Payton, responded by taking the next four games to eliminate the defending champions. The Lakers went on to reach the NBA Finals, where they lost to the Detroit Pistons in five games.

Following the season, Turkoglu signed as a free agent with the Orlando Magic and Kevin Willis signed with the Atlanta Hawks.

Last Playoff Meeting: This is the first meeting between the Spurs and Grizzlies.