The 2009 NBA draft was held on June 25, 2009, and Blake Griffin was selected first overall by the Los Angeles Clippers. The Dallas Mavericks hosted the 59th Annual All-Star Game at Cowboys Stadium in Arlington, Texas, on February 14, 2010.

Cleveland's league-leading 61 wins was the lowest win total to lead the league since the Indiana Pacers won 61 games in 2003–04.

The New Jersey Nets became the fifth team in NBA history to lose 70 games in a season. 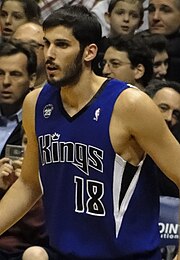 The 2010 NBA All-Star Game was played at Cowboys Stadium, in Texas, on February 14, 2010, with the East winning in a closely contested game, 141–139, and the Miami Heat's Dwyane Wade being named the MVP. The game had record-breaking attendance, with 108,713. In the Rookie Challenge game, the Rookies defeated the Sophomores. Tyreke Evans was named the game's MVP. This is the first time the Rookies won the Rookie Challenge since 2002. During the NBA All-Star Weekend, Nate Robinson of the New York Knicks won the Sprite Slam Dunk Contest for the third time in his career; Kevin Durant, who also won the inaugural event, won this year's H.O.R.S.E Competition and Boston's Paul Pierce beat rookie Stephen Curry to win the Three-Point Shootout. Steve Nash won the Skills Challenge for the second time in his career. Team Texas, which represented Dallas, Houston and San Antonio, won the Shooting Stars Competition. In a miscellaneous note, Dwight Howard of the Orlando Magic set a Guinness World Record for the longest basketball shot while sitting down, at 52 ft 6 in, during Jam Session.

Teams in bold advanced to the next round. The numbers to the left of each team indicate the team's seeding in its conference, and the numbers to the right indicate the number of games the team won in that round. The division champions are marked by an asterisk. Home court advantage does not necessarily belong to the higher-seeded team, but instead the team with the better regular season record; teams enjoying the home advantage are shown in italics.

Players of the week

The following players were named the Eastern and Western Conference Players of the Week.

Players of the month

The following players were named the Eastern and Western Conference Players of the Month.

Rookies of the month

The following players were named the Eastern and Western Conference Rookies of the Month.

Coaches of the month

The following coaches were named the Eastern and Western Conference Coaches of the Month.

The following is a list of notable players who played their first NBA game during the 2009–10 season, listed with their first team.

$1.23 million). Although the league-wide revenue increased by 2.5% in the previous season, the decrease in the salary cap and tax level was the result of the formula used to set the cap and tax under the terms of the collective bargaining agreement.

The 2009–10 NBA season was broadcast in the United States by ABC, ESPN, TNT and NBA TV. A number of games were nationally televised by ABC, ESPN and TNT, while some games were televised by NBA TV. Four teams, the Minnesota Timberwolves, Houston Rockets, New Jersey Nets and Charlotte Bobcats had not have any national TV appearances on ABC, ESPN and TNT. ABC had air several Sunday games and a double-header on Christmas day. ESPN has mainly televised the regular season games on Wednesdays and Fridays, while TNT has mainly televised the Thursday games. TNT has also broadcast the 2010 NBA All-Star Game and the NBA All-Star Saturday Night Events in February.