The 2011–12 NHL season was the 95th season of operation (94th season of play) of the National Hockey League (NHL). The Los Angeles Kings defeated the New Jersey Devils in the Stanley Cup Final four games to two to win the team's first Stanley Cup in their second Stanley Cup final appearance; they had lost to Montreal Canadiens in the 1993 Finals.

During the off-season, the Atlanta Thrashers relocated to Winnipeg, Manitoba, to become the "new" Winnipeg Jets. It was the first NHL team relocation since the 1997–98 season, when the Hartford Whalers relocated to become the Carolina Hurricanes. The league did not change its divisional structure to accommodate the move, and the Jets took the place of the Thrashers in the Southeast Division. In December 2011, the board of governors eventually approved a proposed realignment for the following season, which would result in four conferences with the first two rounds of the playoffs being divisional, but this was rejected by the NHL Players' Association (NHLPA).

It was the fifth consecutive season with games in Europe at the start of the season. The Winter Classic was held on January 2, 2012, in Philadelphia between the Philadelphia Flyers and the New York Rangers. The 59th All-Star Game was held at Scotiabank Place in Ottawa, Ontario, the home arena of the Ottawa Senators, on January 29, 2012.

Atlanta Spirit, LLC, which previously owned the Atlanta Thrashers, sold the team to True North Sports and Entertainment, who relocated them to the True North-owned MTS Centre in Winnipeg, Manitoba and renamed the Winnipeg Jets, after a previous NHL team in the market. Winnipeg took Atlanta's place in the Southeast Division for 2011–12.

Several teams announced plans to change their uniforms in the 2011–12 season.

The Edmonton Oilers unveiled a new away uniform parallel to their "retro" home uniform used from 1979 to 1996. They retained the navy blue, copper and red uniforms as their alternates.

The Nashville Predators unveiled new home and away uniforms on June 22, complete with the updated saber-toothed cat logo. Their use of gold as the home colors marked the first time since 1988 that an NHL team wore gold in their home uniforms.

The Florida Panthers made minor changes to their home uniform, using red as the primary and relegating navy blue as a trim color.

The Ottawa Senators unveiled a new alternate home uniform based on the original Senators barber pole design. The uniform does not use the Roman centurion logo, instead using an outlined "O" on stripes. The Senators' uniform will also have an All-Star Game patch.

The Tampa Bay Lightning unveiled new home and road uniforms, featuring the simplified lightning logo. Originally the uniforms were simply blue and white, but by popular demand, black was added as a trim color to the uniform numbers, and added the lightning bolt to the pants. The "Bolts" alternate home uniform was retained.

The Toronto Maple Leafs unveiled a new alternate home uniform based on the Leafs uniforms worn during their run to the 1967 Stanley Cup title, including the 11-point maple leaf logo.

The new Winnipeg Jets unveiled uniforms consisting of navy with silver and light blue trim, containing a logo based on the roundel of the Royal Canadian Air Force; these were significantly different from, but in a similar color scheme to, the original Jets uniforms.

The New York Islanders unveiled a new black alternate uniform, featuring the team name above the player's number, a similar template the Dallas Stars' uniforms currently use. Speaking of the Stars, they officially retired their alternate away jersey featuring the team crest, instead using their regular away jerseys with the city name and number in front for all 41 road games.

The New York Rangers and Philadelphia Flyers wore special commemorative uniforms for the 2012 NHL Winter Classic. The Flyers unveiled theirs on November 21, and is in a classic sweater design in orange featuring black numbers and different striping patterns on the yoke. The Rangers unveiled theirs on November 28, and features a mix of designs used from previous jerseys. The shield logo in front is a variation of the logos used during the 1930s–1940s, while the shoulder, arm and tail striping was taken from the current jersey. Both teams would wear their Winter Classic uniforms again on February 5 and 11 at Madison Square Garden and Wells Fargo Center respectively, with the away team wearing the regular uniforms.

In addition several teams sported memorial patches throughout the season; many of these memorials were for related events (see "Off-Season" section below). Unless specified, the patches were seen on the team helmets:

Furthermore, a new league-wide rule required that player numbers be displayed on the front of their helmets, as well as on the back.

Even though the New Jersey Devils and the Phoenix Coyotes unveiled anniversary logos commemorating their 30th and 15th anniversaries of their respective relocations from Colorado and Winnipeg, they opted not to use them on their uniforms or helmets.

Prior to the 2011–12 season, the Board of Governors unanimously agreed to update and re-word rule 41 involving boarding penalties. The new wording requires the player delivering the check to avoid or minimize contact if the opponent is defenceless.

Illegal hits to the head

The Board of Governors also approved an update to rule 48 involving illegal checks to the head. The new rule will penalize all hits where the head is the principal point of contact. The previous version of this rule only made checks from the blindside illegal. However, determination if the check is legal will depend on various factors including whether or not the player put himself in a vulnerable position or if the hit was unavoidable. A two-minute minor penalty, or a major penalty in the event the hit was deemed to be deliberate with intent to injure, may be assessed.

Three young (under 40) "enforcer"-type players died within a four-month span during the off-season. The deaths of Derek Boogaard, Rick Rypien and Wade Belak led to speculation about the effect of fighting on the mental health of players.

The four teams going to Europe to open their regular seasons there as part of the NHL Premiere games also played exhibition games against European teams under the banner of NHL Premiere Challenge to close out their pre-seasons. The NHL teams had an overall record of 6–1–0 against the European teams, with the New York Rangers, playing four games in five days in four countries, having a record of 3–1–0.

Four teams participated in the 2011 Compuware NHL Premiere in Europe. The Anaheim Ducks, Los Angeles Kings and New York Rangers made their second trip to Europe while the Buffalo Sabres made its first trip. On October 7, Anaheim played Buffalo at Hartwall Areena in Helsinki, Finland, and Los Angeles faced New York at the Ericsson Globe Arena in Stockholm, Sweden. All four teams played again on October 8 with Los Angeles against Buffalo at the O2 World Arena in Berlin, Germany, and Anaheim against New York in Stockholm.

As part of the league's updated television contract, the NHL debuted the Thanksgiving Showdown, a nationally broadcast game on the day after American Thanksgiving in 2011. The game, which was sponsored by Discover, featured the Boston Bruins (who have traditionally hosted Black Friday matinées since 1990) hosting the Detroit Red Wings, with Detroit winning the game in a shootout, 3–2.

The 2012 NHL Winter Classic was held at the Citizens Bank Park baseball stadium in Philadelphia, Pennsylvania, on Monday, January 2, 2012. This season, the Philadelphia Flyers hosted the New York Rangers. It was the first Winter Classic game for the Rangers and the second for the Flyers. The result of the game was a 3–2 Ranger victory. Philadelphia last played in the 2010 NHL Winter Classic against the Boston Bruins at Fenway Park in Boston, Massachusetts. The Bruins won that game in overtime by a score of 2–1 on a goal scored by Marco Sturm.

This was the first time that the Winter Classic was not played on New Year's Day, which fell on a Sunday in 2012. If the Winter Classic was held on New Year's Day, it would have conflicted with the final game of the National Football League season (in which the Philadelphia Eagles hosted the Washington Redskins at nearby Lincoln Financial Field), and the annual Mummers Parade in downtown Philadelphia. The Flyers–Rangers rivalry is one of the NHL's most frequently televised rivalries on U.S. television networks; it was televised three times nationally on NBC in 2011–12, including the inaugural Hockey Day in America.

No Heritage Classic was played this season. 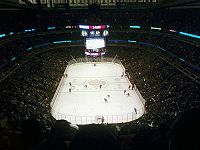 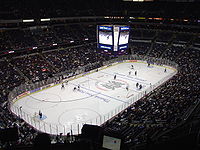 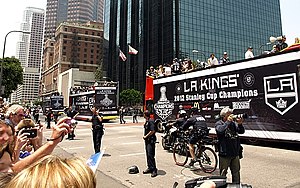 The 2012 playoffs started on Wednesday, April 11, 2012, and ended with the sixth game of the Stanley Cup Finals on June 11, 2012, in which the Los Angeles Kings defeated the New Jersey Devils 6–1 to win their first Stanley Cup in franchise history. The Boston Bruins and Vancouver Canucks, the Stanley Cup finalists from 2011, were eliminated in the first round, ensuring a new champion in 2012. In the East, three of the four series went to seven games in the opening round, and two of those went to overtime to decide their series. The series between Philadelphia and Pittsburgh set new playoff scoring records, while the Boston-Washington series had only a single goal differential. In the West, none of the first-round winners had won the Stanley Cup, and the Phoenix Coyotes won their first playoff series since moving to Phoenix from Winnipeg. All West series were decided in six games or less, and five of the six games in the Chicago-Phoenix series went to overtime.

In each round, the highest remaining seed in each conference is matched against the lowest remaining seed. The higher-seeded team is awarded home ice advantage. In the Stanley Cup Final series, home ice is determined based on regular season points. Each best-of-seven series follows a 2–2–1–1–1 format: the higher-seeded team plays at home for games one and two (plus five and seven if necessary), and the lower-seeded team is at home for games three and four (and if necessary, game six).

The following players lead the league in points at the conclusion of the regular season.

The following goaltenders led the league in goals against average at the end of the regular season while playing at least 1,800 minutes.

The following is a list of notable players who played their first NHL game in 2011–12, listed with their first team:

The following is a list of players of note who played their last NHL game in 2011–12, listed with their team: