A Little Princess is a children's novel by Frances Hodgson Burnett, first published as a book in 1905. It is an expanded version of the short story "Sara Crewe: or, What Happened at Miss Minchin's", which was serialized in St. Nicholas Magazine from December 1887, and published in book form in 1888. According to Burnett, after she composed the 1902 play A Little Un-fairy Princess based on that story, her publisher asked that she expand the story as a novel with "the things and people that had been left out before". The novel was published by Charles Scribner's Sons (also publisher of St. Nicholas) with illustrations by Ethel Franklin Betts and the full title A Little Princess: Being the Whole Story of Sara Crewe Now Being Told for the First Time.

Based on a 2007 online poll, the U.S. National Education Association named the book one of its "Teachers' Top Books for Children". In 2012 it was ranked number 56 among all-time children's novels in a survey published by School Library Journal, a monthly with primarily U.S. audience. It was the second of two Burnett novels among the Top 100, with The Secret Garden number 15. 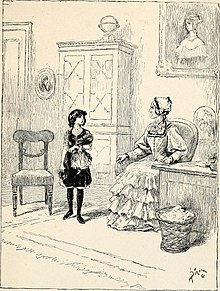 "She slowly advanced into the parlor, clutching her doll": Illustration from Sara Crewe; or, What Happened at Miss Minchin's (1888)

Captain Crewe, a wealthy English widower, has been raising his only child, Sara, in India where he is stationed with the British Army. Because the Indian climate is considered too harsh for children, British families living there traditionally send their children to boarding school back home in England. The captain enrolls his young daughter at Miss Minchin's boarding school for girls in London, and dotes on his daughter so much that he orders and pays the headmistress for special treatment and exceptional luxuries for Sara, such as a private room for her with a personal maid and a separate sitting room (see Parlour boarder), along with Sara's own private carriage and a pony. Miss Minchin openly fawns over Sara for her money, but secretly and jealously despises her for her wealth.

Despite her privilege, Sara is neither arrogant nor snobbish, but rather kind, generous and clever. She extends her friendship to Ermengarde, the school dunce; to Lottie, a four-year-old student given to tantrums; and to Becky, the lowly, stunted fourteen-year-old scullery maid. When Sara acquires the epithet “Princess,” she embraces its favorable elements in her natural goodheartedness.

After some time, Sara's birthday is celebrated at Miss Minchin's with a lavish party, attended by all her friends and classmates. Just as it ends, Miss Minchin learns of Captain Crewe's unfortunate demise. Furthermore, prior to his death, the previously wealthy captain had lost his entire fortune; a friend had persuaded him to cash in his investments and deposit the proceeds to develop a network of diamond mines. The scheme fails, and Sara is left an orphan and a pauper, with no other family and nowhere to go. Miss Minchin is left with a sizable unpaid bill for Sara's school fees and luxuries, including her birthday party. Infuriated and pitiless, she takes away all of Sara's possessions (except for some old frocks and one doll), makes her live in a cold and poorly furnished attic, and forces her to earn her keep by working as an errand girl. She forces Sara to wear frocks much too short for her, with her thin legs peeking out of the brief skirts.

For the next several years, Sara is abused by Miss Minchin and the other servants, except for Becky. Miss Minchin's kind-hearted sister, Amelia, deplores the way that Sara is treated, but is too weak-willed to speak up about it. Sara is starved, worked for long hours, sent out in all weathers, poorly dressed in outgrown and worn-out clothes, and deprived of warmth or a comfortable bed in the attic. Despite her hardships, Sara is consoled by her friends and uses her imagination to cope, pretending she is a prisoner in the Bastille or a princess disguised as a servant. Sara also continues to be kind and polite to everyone, including those who treat her badly. One day, she finds a coin in the street and uses it to buy buns at a bakery, but despite being very hungry, she gives most of the buns away to a beggar girl dressed in rags who is hungrier than herself. The bakery shop owner sees this and wants to reward Sara, but she has disappeared, so the shop owner instead gives the beggar girl bread and warm shelter for Sara's sake.

"He was waiting for his master to come out to the carriage, and Sara stopped and spoke a few words to him": Illustration from Sara Crewe; or, What Happened at Miss Minchin's (1888)

Meanwhile, Mr. Carrisford and his Indian assistant Ram Dass have moved into the house next door to Miss Minchin's school. Carrisford had been Captain Crewe's friend and partner in the diamond mines. After the diamond mine venture failed, both Crewe and Carrisford became very ill, and Carrisford in his delirium abandoned his friend Crewe, who died of his "brain fever". As it turned out, the diamond mines did not fail, but instead were a great success, making Carrisford extremely rich. Although Carrisford survived, he suffers from several ailments and is guilt-ridden over abandoning his friend. He is determined to find Crewe's daughter and heir, although he does not know where she is and thinks she is attending school in France.

Ram Dass befriends Sara when his pet monkey escapes into Sara's adjoining attic. After climbing over the roof to Sara's room to get the monkey, Ram Dass tells Carrisford about Sara's poor living conditions. As a pleasant distraction, Carrisford and Ram Dass buy warm blankets, comfortable furniture, food, and other gifts, and secretly leave them in Sara's room when she is asleep or out. Sara's spirits and health improve due to the gifts she receives from her mysterious benefactor, whose identity she does not know; nor are Ram Dass and Carrisford aware that Sara is Crewe's lost daughter. When Carrisford anonymously sends Sara a package of new, well-made, and expensive clothing in her proper size, Miss Minchin becomes alarmed, thinking Sara might have a wealthy relative secretly looking out for her, and begins to treat Sara better and allows her to attend classes rather than doing menial work.

One night, the monkey again runs away to Sara's room, and Sara visits Carrisford's house the next morning to return him. When Sara casually mentions that she was born in India, Carrisford and his solicitor question her and discover that she is Captain Crewe's daughter, for whom they have been searching for years. Sara also learns that Carrisford was her father's friend and her own anonymous benefactor, and that the diamond mines have produced great riches, of which she will now own her late father's share. When Miss Minchin angrily appears to collect Sara, she is informed that Sara will be living with Carrisford and her entire fortune has been restored and greatly increased. Upon finding this out, Miss Minchin unsuccessfully tries to persuade Sara into returning to her school as a star pupil, and then threatens to keep her from ever seeing her school friends again, but Carrisford and his solicitor tell Miss Minchin that Sara will see anyone she wishes to see and that her friends' parents are not likely to refuse invitations from an heiress to diamond mines. Miss Minchin goes home, where she is surprised when Amelia finally stands up to her. Amelia has a nervous breakdown afterwards, but she is on the road to gaining more respect.

Sara invites Becky to live with her and be her personal maid, in much better living conditions than at Miss Minchin's. Carrisford becomes a friend to Sara and quickly regains his health. Finally, Sara — accompanied by Becky — pays a visit to the bakery where she bought the buns, making a deal with the owner to cover the bills for bread for any hungry child. They find that the beggar girl who was saved from starvation by Sara's selfless act is now the bakery owner's assistant, with good food, clothing, shelter, and steady employment.

The novella appears to have been inspired in part by Charlotte Brontë's unfinished novel Emma, the first two chapters of which were published in Cornhill Magazine in 1860, featuring a rich heiress with a mysterious past who is apparently abandoned at a boarding school.

Millie James as Sara in the Broadway production of Burnett's play, The Little Princess (1903)

Burnett said that after the production of the play on Broadway, her publisher, Charles Scribner's Sons, asked her to expand the story into a full-length novel and "put into it all the things and people that had been left out before." The book was illustrated by Ethel Franklin Betts and published in 1905 under the full title A Little Princess: Being the Whole Story of Sara Crewe Now Being Told for the First Time. 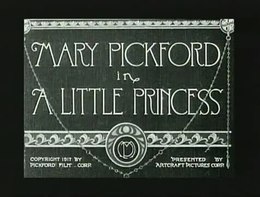 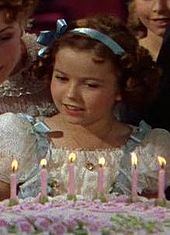 Shirley Temple as Sara in The Little Princess (1939)

Due in part to the novel's public domain status, several musical versions of A Little Princess have emerged in recent years, including:

Some of these productions have made significant changes to the book, story and characters, most notably the Sickinger/Atkey version, which moves the action to Civil War-era America.

In addition, Princesses, a 2004 musical currently in development for Broadway, features students at a boarding school presenting a production of A Little Princess. Music and book by Cheri Steinkellner and Bill Steinkellner; lyrics and direction by David Zippel.

In 1995, Apple published a series of three books written by Gabrielle Charbonnet. "The Princess Trilogy" was an updated version of the classic, with the title character named Molly, rather than Sara. Molly Stewart's father was a famous film director who left his daughter in a posh upscale boarding school. There were three books in the series, which ended in a similar way as the original: Molly's Heart, The Room on the Attic, and Home at Last.

A sequel by Hilary McKay was published by Hodder Children's Books in September 2009: Wishing For Tomorrow: The Sequel to A Little Princess. It tells the story of what happened to the rest of the boarding school girls after Sara and Becky left ("life must go on at Miss Minchin's").

Uses material from the Wikipedia article "A Little Princess", released under the CC BY-SA 3.0 license.