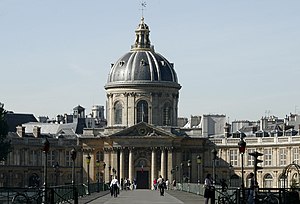 The Institut de France; seat of the Académie des Beaux-Arts

The Académie des Beaux-Arts (French pronunciation: ​[akademi de boz‿aʁ], Academy of Fine Arts) is a French learned society. It is one of the five academies of the Institut de France. The current President of the Academy (2021) is Alain-Charles Perrot, a french architect.

Previously the Académie granted the Prix Rossini for excellence in libretto or music composition.

The members are grouped into nine sections: