Arab navigator and cartographer
Not to be confused with Ahmad Majid.

Aḥmad ibn Mājid ( أحمد بن ماجد), also known as the Lion of the Sea, was an Arab navigator and cartographer born c. 1432 in Julfar, part of Oman under the Nabhani dynasty rule at the time, (present-day Ras Al Khaimah, United Arab Emirates). He was raised in a family famous for seafaring; at the age of 17 he was able to navigate ships. The exact date is not known, but ibn Majid probably died in 1500. Although long identified in the West as the navigator who helped Vasco da Gama find his way from Africa to India, contemporary research has shown Ibn Majid is unlikely even to have met da Gama. Ibn Majid was the author of nearly forty works of poetry and prose. 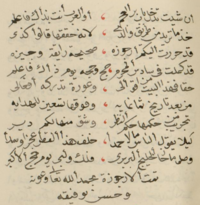 Ibn Majid wrote several books on marine science and the movements of ships, which helped people of the Persian Gulf to reach the coasts of India, East Africa and other destinations. Among his many books on navigation, Kitab al-Fawa’id fi Usul ‘Ilm al-Bahr wa ’l-Qawa’id (The Book of the Benefits of the Principles and Foundations of Seamanship) is considered as one of his best. It is an encyclopedia, describing the history and basic principles of navigation, latitude and longitude by way of celestial navigation, lunar mansions, loxodromes, the difference between coastal and open-sea sailing, the locations of ports from East Africa to Indonesia, accounts of the monsoon and other seasonal winds, typhoons and other topics for professional navigators. He drew from his own experience and that of his father, also a famous navigator, and the lore of generations of Indian Ocean sailors. The book encompassed the entire science of navigation in the Indian Ocean at the time.

Ibn Majid was known as the Muallim (teacher), i.e. teacher of navigation. Most of his navigational calculations depended on astrology.

Although Ibn Majid was long held to have helped the Portuguese navigator Vasco da Gama cross from Africa to the Indian subcontinent, contemporary research has shown that he would have been in his seventies at the time of da Gama's trip. The actual pilot who sailed with da Gama was a Gujarati and in fact returned to Portugal with da Gama. The man was provided to da Gama by the Ruler of Malindi and was, assumed da Gama and his men, a Christian. He guided da Gama's ships to Mount Eli on the Indian coast after a 23-day voyage.

Researchers have also used the three rutters of Ibn Majid, particularly the ‘Sofala Rutter’, to comprehensively debunk the entire story of Ibn Majid and any association with da Gama. The evidence in these, letters written by da Gama himself and Ibn Majid’s age (he considered himself too old to navigate – in 1498, when da Gama arrived in Malindi, Ibn Majid would have been 77), all provide a strong refutation of the entire story and it is now accepted as highly unlikely that Ibn Majid had ever even met da Gama, let alone given him the route to India. However, his printed works are thought to have been a valuable source for the Portuguese when they arrived in the region.

Remembered as “The Lion of the Sea”, Ibn Majid's true legacy was the substantial body of literature on navigation that he left behind. Arab sailing was at a pinnacle during ibn Majid's lifetime, when both Europeans and Ottomans had only a limited understanding of geography in the Indian Ocean. His Kitab al-Fawa’id fi Usul ‘Ilm al-Bahr wa’l-Qawa’id was widely utilized by Arab sailors and addressed celestial navigation, weather patterns, and charts of dangerous areas in which to sail. This tome, in addition to his poetic works, were the true legacy of the sailor. Two of ibn Majid's famous hand-written books are now prominent exhibits in the Bibliothèque nationale de France.

In the television series Star Trek: Picard, set in the future, the character Cristóbal "Chris" Rios (portrayed by Santiago Cabrera) is a former Starfleet officer who once served on the Federation starship USS Ibn Majid, NCC-75710, as revealed in the 2020 episode "Broken Pieces".