According to the official census data (held every 10 years), Albanians made up 19% of the total population in 1953. The population fell to 13% in 1961, but grew again in 1971 to 17%. The group formed 19.7% in 1981 and 21% in 1991. At the last census in 2002, the Albanian population was at 25.2%. Ethnologue in 2002 estimated some 500,000 people speaking the Albanian language in North Macedonia. In the decade since the republic declared independence from Yugoslavia, some Albanians have claimed to account for 30% of the population and demanded an appropriate share of power. On the other side, ethnic Macedonians said Albanians were barely 20%. However, the widely accepted number of Albanians in North Macedonia is according to the internationally monitored 2002 census. The census data estimated that Albanians account for about 25.2% of the total population. The 2012 census was not held and boycotted by the Albanian political parties. In the 2008 Macedonian parliamentary elections, Albanian political parties received 22.61% of the total vote, receiving 29 of 120 seats.

The Albanian language is co-official at a state level (excluding defense, central police and monetary policy) and in local self-government units where speakers of the population are 20% or more. The change in status occurred in 2019 as usage of the Albanian language became no longer geographically limited. The new law extended the official use of Albanian over the entire country, easing communication in Albanian with the institutions. Under the new legislation, Macedonian continues to be the primary official language, while Albanian may be used now as a second one, including at a national level in official matters. The legislation stipulates also all public institutions in the country will provide Albanian translations in their everyday work.

The Albanian population in the country is largely rural with ethnic Albanians forming a majority or plurality in only 3 of the country's 34 cities.

Municipalities with an Albanian majority

Of the 80 municipalities in the country, 15 have an ethnic Albanian majority following the 2013 Macedonian territorial reforms. 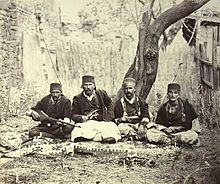 Albanians from Debar in 1863

Shortly after the defeat of Turkey by the Balkan allies, a conference of ambassadors of the Great Powers (Britain, Germany, Russia, Austria-Hungary, France, and Italy) convened in London in December 1912 to settle the outstanding issues raised by the conflict. With support given to the Albanians by Austria-Hungary and Italy, the conference agreed to create an independent state of Albania, which became a reality in 1913. However, the boundaries of the new state were drawn in such a way that large areas with Albanian populations remained outside of Albania, including the area that would go on to become the Socialist Republic of Macedonia.

When the Socialist Republic of Macedonia was established in 1946, the constitution guaranteed the right of minorities to cultural development and free use of their language. Minority schools and classes in minority languages were introduced immediately, in order to counter the high percentage of illiteracy among these groups. In the following two decades, the communist party continuously introduced measures meant to promote the incorporation of the Albanian community into the economic and social life of the new socialist state through education, professional training, and social opportunities.

Since the end of World War II, the Socialist Republic of Macedonia's population has grown steadily, with the greatest increases occurring in the ethnic Albanian community. From 1953 through the time of the latest census in 2002 (initial results were released December 2003), the percentage of Albanians living in North Macedonia rose 25.2%. Most of the ethnic Albanians live in the western part of the country. The net influx in the past 30 years has been close to 100,000 Albanians.

Albanians from Štirovica, Gostivar in 1907

In the late 1980s when the autonomy of the province of Kosovo was revoked, and the repression of the Albanian population significantly increased, these developments also took place in the Socialist Republic of Macedonia. The Albanian language was removed from public sight, Albanian families were prohibited from naming their children with Albanian names on the ground that it caused divisions with the other communities in the republic, and finally, to lower the significantly high birth rate of the Albanian population, Albanian families were prohibited from having more than two children. This assimilative campaign can be clearly seen by the fact that in 1990 the amended Constitution redefined the state from "a state of the Macedonian people and the Albanian and Turkish nationalities" to a "national state of the Macedonian people".

In the September 2002 elections, an SDSM-led pre-election coalition won half of the 120 seats in parliament. Branko Crvenkovski was elected Prime Minister in coalition with the ethnic Albanian Democratic Union for Integration (DUI) party and the Liberal-Democratic Party (LDP).

On 26 November 2019, an earthquake struck Albania. Albanians from North Macedonia responded in large numbers to the Albanian government's appeal for financial assistance through donations to various humanitarian organisations and special bank accounts fundraising for aid.

North Macedonia has a few Albanian parties. The Democratic Union for Integration (DUI) and the Democratic Party of Albanians are the two largest Albanian political parties in the country. In the 2008 Macedonian parliamentary elections, DUI won 11.3% of the total vote, while DPA got 10.1%. However, due to pre-election fights between the two main Albanian political parties, some Albanian areas of the country have revoted.

In the 2014 elections, three Albanian parties, DUI, DPA, and NDP won 19 seats, seven seats, and one seat, respectively, out of the 123 total seats. Ethnic Albanians parties received just under 21% of the total popular vote.

Main article: Albanian nationalism in the Republic of Macedonia 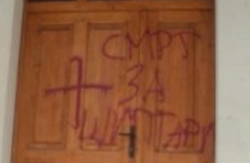 Anti-Albanian inscription written in Macedonian on a mosque, meaning "Death for Albanians"

The Macedonian Academy for Science and Art was accused of Albanophobia in 2009 after it published its first encyclopedia in which was claimed that the Albanian endonym, Shqiptar, means "highlander" and is primarily used by other Balkan peoples to describe Albanians, if used in South Slavic languages the endonym is considered derogatory by the Albanian community. The encyclopaedia also claimed that the Albanians settled the region in the 16th century. Distribution of the encyclopedia was ceased after a series of public protests.

On 12 April 2012, five ethnic Macedonian civilians were shot dead allegedly by ethnic Albanian in an attack known as the Železarsko lake killings.

On 1 March 2013 in Skopje, a mob of ethnic Macedonians protested against the decision to appoint Talat Xhaferi, an ethnic Albanian politician, as Minister of Defence. The protest turned violent when the mob started hurling stones and also attacking Albanian bystanders and police officers alike. The police reports 3 injured civilians, five injured police officers and much damage to private property. Although the city hospital reported treating five heavily injured Albanian men, two of which are on Intensive-care unit. During this protest part of the mob burned the Albanian flag.

On the 108th anniversary of the Congress of Manastir the museum of the Albanian alphabet in Bitola was vandalized, the windows and doors were broken. A poster with the words "Death to Albanians" and with the drawing of a lion cutting the heads of the Albanian double-headed eagle was placed on the front doors of the museum. One week after this incident, on the day of the Albanian Declaration of Independence graffiti with the same messages, as those of the previous week, were placed on the directorate of Pelister National Park.

Amongst the unemployed, Albanians are highly overrepresented. In public institutions as well as many private sectors they are underrepresented. They also face discrimination by public officials and employers. According to the United States' Country Report on Human Rights 2012 for Macedonia "certain ministries declined to share information about ethnic makeup of employees". The same report also added:

As of 2019, the Albanian language is a co-official language in the country.

The main religion among Albanians in North Macedonia is Islam (see Islam in North Macedonia), though there are some who are Roman Catholic, with the most prominent member Agnes (Anjeza) Bojaxhiu, also known as Mother Teresa. There are also a few Orthodox Christian Albanian villages located in Gostivar, Reka, and scattered in the southeast.

Pjetër Bogdani (ca. 1630 - 1689), known in Italian as Pietro Bogdano, is the most original writer of early literature in Albania. He is author of the Cuneus Prophetarum (The Band of the Prophets), 1685, the first prose work of substance written originally in Albania. Born in Gur i Hasit, Has, near Kukës district, Albania about 1630, Bogdani was educated in the traditions of the Catholic Church to which he devoted all his energy. His uncle Andrea or Ndre Bogdani (ca. 1600-1683) was Archbishop of Skopje and author of a Latin-Albanian grammar, now lost.

Retrieved from "https://en.wikipedia.org/w/index.php?title=Albanians_in_North_Macedonia&oldid=1008575285"
Uses material from the Wikipedia article Albanians in North Macedonia, released under the CC BY-SA 3.0 license.