Alexander III (Medieval Gaelic: Alaxandair mac Alaxandair; Modern Gaelic: Alasdair mac Alasdair) (4 September 1241 – 19 March 1286) was King of Scots from 1249 until his death. He concluded the Treaty of Perth, by which Scotland acquired sovereignty over the Western Isles and the Isle of Man. His heir, Margaret, Maid of Norway, died before she could be crowned.

Alexander was born at Roxburgh, the only son of Alexander II by his second wife Marie de Coucy. Alexander's father died on 8 July 1249 and he became king at the age of seven, inaugurated at Scone on 13 July 1249.

The years of his minority featured an embittered struggle for the control of affairs between two rival parties, the one led by Walter Comyn, Earl of Menteith, the other by Alan Durward, Justiciar of Scotia. The former dominated the early years of Alexander's reign. At the marriage of Alexander to Margaret of England in 1251, Henry III of England seized the opportunity to demand from his son-in-law homage for the Scottish kingdom, but Alexander did not comply. In 1255 an interview between the English and Scottish kings at Kelso led to Menteith and his party losing to Durward's party. But though disgraced, they still retained great influence, and two years later, seizing the person of the king, they compelled their rivals to consent to the erection of a regency representative of both parties.

On attaining his majority at the age of 21 in 1262, Alexander declared his intention of resuming the projects on the Western Isles which the death of his father thirteen years before had cut short. He laid a formal claim before the Norwegian king Haakon. Haakon rejected the claim, and in the following year responded with a formidable invasion. Sailing around the west coast of Scotland he halted off the Isle of Arran, and negotiations commenced. Alexander artfully prolonged the talks until the autumn storms should begin. At length Haakon, weary of delay, attacked, only to encounter a terrific storm which greatly damaged his ships. The Battle of Largs (October 1263) proved indecisive, but even so, Haakon's position was hopeless. Baffled, he turned homewards, but died in Orkney on 15 December 1263. The Isles now lay at Alexander's feet, and in 1266 Haakon's successor concluded the Treaty of Perth by which he ceded the Isle of Man and the Western Isles to Scotland in return for a monetary payment. Norway retained Orkney and Shetland until 1469 when they became a dowry for James III's bride, Margaret of Denmark.

Alexander had married Margaret, daughter of King Henry III of England and Eleanor of Provence, on 25 December 1251, when he was ten years old and she was eleven. She died in 1275, after they had had three children.

According to the Lanercost Chronicle, Alexander did not spend his decade as a widower alone: "he used never to forbear on account of season nor storm, nor for perils of flood or rocky cliffs, but would visit none too creditably nuns or matrons, virgins or widows as the fancy seized him, sometimes in disguise."

Towards the end of Alexander's reign, the death of all three of his children within a few years made the question of the succession one of pressing importance. In 1284 he induced the Estates to recognize as his heir-presumptive his granddaughter Margaret, the "Maid of Norway". The need for a male heir led him to contract a second marriage to Yolande de Dreux on 1 November 1285.

Alexander died in a fall from his horse while riding in the dark to visit the queen at Kinghorn in Fife on 19 March 1286 because it was her birthday the next day. He had spent the evening at Edinburgh Castle celebrating his second marriage and overseeing a meeting with royal advisors. He was cautioned against making the journey to Fife because of weather conditions, but crossed the Forth from Dalmeny to Inverkeithing anyway. On arriving in Inverkeithing, he insisted on not stopping for the night, despite the pleas of the nobles accompanying him and one of the burgesses of the town, Alexander Le Saucier. Le Saucier (who was either linked to the King's kitchen or the master of the local saltpans) must have been known to the King, since his rather blunt warning to the King lacks the usual deference: "My lord, what are you doing out in such weather and darkness? How many times have I tried to persuade you that midnight travelling will do you no good?"

However, Alexander ignored the repeated warnings about travelling in a storm, and set off with his retinue and two local guides. The king became separated from his party near Kinghorn, and was found dead with a broken neck near the shore the following morning. It is assumed that his horse lost its footing in the dark. While some texts say that he fell off a cliff, there is none at the site where his body was found; however, there is a very steep rocky embankment, which "would have been fatal in the dark." After Alexander's death, his realm was plunged into a period of darkness that would eventually lead to war with England. He was buried in Dunfermline Abbey.

As Alexander left no surviving children, the heir to the throne was his unborn child by Queen Yolande. When Yolande's pregnancy ended, probably with a miscarriage, Alexander's seven-year-old granddaughter Margaret, Maid of Norway, became the heir. Margaret died, still uncrowned, on her way to Scotland in 1290. The inauguration of John Balliol as king on 30 November 1292 ended the six years of the Guardians of Scotland governing the land.

The death of Alexander and the subsequent period of instability in Scotland was lamented in an early Scots poem recorded by Andrew of Wyntoun in his Orygynale Cronykil of Scotland.

In 1886, a monument to Alexander III was erected at the approximate location of his death in Kinghorn. 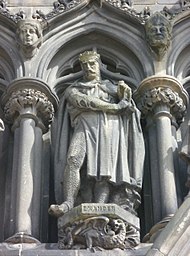 Statue of Alexander on the west door of St Giles' Cathedral, Edinburgh

Alexander III has been depicted in historical novels. They include:

Retrieved from "https://en.wikipedia.org/w/index.php?title=Alexander_III_of_Scotland&oldid=1001469923"
Uses material from the Wikipedia article Alexander III of Scotland, released under the CC BY-SA 3.0 license.