Loose soil or sediment that is eroded and redeposited in a non-marine setting
"Alluvial" redirects here. For the American racehorse, see Alluvial (horse). For the type of flow diagram, see Alluvial diagram. 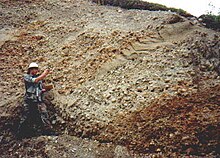 Section of alluvium at the Blue Ribbon Mine in Alaska

Alluvium deposits in the Gamtoos Valley in South Africa 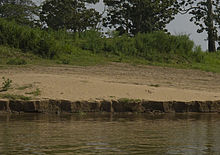 Alluvium (from the Latin alluvius, from alluere, "to wash against") is loose, unconsolidated (not cemented together into a solid rock) soil or sediment that has been eroded, reshaped by water in some form, and redeposited in a non-marine setting. Alluvium is typically made up of a variety of materials, including fine particles of silt and clay and larger particles of sand and gravel. When this loose alluvial material is deposited or cemented into a lithological unit, or lithified, it is called an alluvial deposit.

The term "alluvium" is not typically used in situations where the formation of the sediment can clearly be attributed to another geologic process that is well described. This includes (but is not limited to): lake sediments (lacustrine), river sediments (fluvial), or glacially-derived sediments (glacial till). Sediments that are formed or deposited in a perennial stream or river are typically not referred to as alluvial.

Most alluvium is geologically Quaternary in age and is often referred to as "cover" because these sediments obscure the underlying bedrock. Most sedimentary material that fills a basin ("basin fill") that is not lithified is typically lumped together as "alluvial". Alluvium of Pliocene age occurs, for example, in parts of Idaho. Alluvium of late Miocene age occurs, for example, in the valley of the San Joaquin River, California.

Uses material from the Wikipedia article "Alluvium", released under the CC BY-SA 3.0 license.