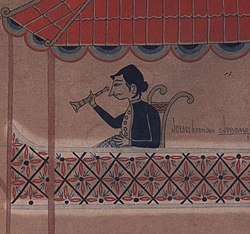 Amangkurat II (died 1703) was the Susuhunan of Mataram (later Kartasura) from 1677 to 1703. Prior to taking the throne, he was the crown prince and had the title Pangeran Adipati Anom.

Born as Raden Mas Rahmat, he was the son of Amangkurat I of Mataram and Ratu Kulon, daughter of Pangeran Pekik of Surabaya.

RM. Rahmat was raised in Surabaya. He then moved to Plered Palace as adipati anom (crown prince). However, his relation with his brother, Prince Singasari, worsened. There was also a news that poaition of crown prince would be transferred to Prince Singasari.

In 1661, RM. Rahmat rebelled to his father, supported by anti-Amangkurat I faction. The small rebellion could be suppressed. But, Amangkurat I failed when he attempted to poison RM. Rahmat in 1663, and made their relation worsened.

In 1668, RM. Rahmat fell in love with Rara Oyi, a Surabaya girl who would become his father's concubine. Pangeran Pekik abducted her to be married with RM. Rahmat. This made Amangkurat I angered and murdered Pangeran Pekik and his family. RM. Rahmat was pardoned after he was forced to murder Rara Oyi with his own hand.

Amangkurat I also relinquished the position of crown prince from RM. Rahmat, and transferred it to Prince Puger (future Pakubuwono I).

In 1670, RM. Rahmat asked Panembahan Rama, a spiritual teacher originated from Kajoran family, for help. Panembahan Rama introduced his former son-in-law, Trunajaya of Madura, to be his assistant.

In 1674, Karaeng Galesong of Makassar and his followers came to Mataram. They requested a tract of land in Mataram, but rejected by Amangkurat I. They were hurt by the refusal and joined with Trunajaya, who rebelled in the east. RM. Rahmat secretly gave them a tract of land in Demung, Besuki (now in Situbondo Regency).

With the merging of Karaeng Galesong, Trunajaya force became larger and hard to control. RM. Rahmat were anxious and decided to join with his father's side. He regained his position as crown prince, because Prince Puger was born from a mother originated from Kajoran family, which supported the rebellion. With the reunion of RM. Rahmat to his father, Amangkurat I, the rebellion of Trunajaya and Karaeng Galesong became more violent.

Ultimately, Trunajaya invaded Plered Palace on 2 July 1677. Amangkurat I and RM. Rahmat themselves escaped to the west, while the palace was defended by Prince Puger as a proof that not all members of Kajoran family supported Trunajaya. However, Prince Puger himself was ousted to Kajenar.

Amangkurat II became monarch in 1677 at the height of the Trunajaya rebellion. He succeeded his father, Amangkurat I, who died in Tegal after being expelled from Plered, his capital by Raden Trunajaya, a prince from Madura that captured the court in 1677. According to Babad Tanah Jawi, Amangkurat I's death was caused by poison in his beverage, given by RM. Rahmat, his own son. Despite of that, RM. Rahmat was still chosen as his successor, but accompanied by a curse that none of his descendants never became a monarch but his short-term son.

In Tegal, RM. Rahmat was welcomed by Martalaya, Regent of Tegal. RM. Rahmat initially planned to make a pilgrim (hajj) instead of fighting against Trunajaya. But he suddenly cancelled his plan, reportedly because he got wahyu keprabon (divine mandate). RM. Rahmat then implemented his father's will to collaborate with Dutch East India Company.

Like his father, Amangkurat II was nearly helpless, having fled without an army nor a treasury to build one. In an attempt to regain his kingdom, he made substantial concessions to the Dutch East India Company (VOC), who then went to war to reinstate him.

In September 1677, a treaty was signed in Jepara. The Dutch East India company was represented by Cornelis Speelman. Most northern coast of Java, straddling between Karawang Regency and Panarukan, Situbondo Regency, was mortgaged to Dutch East India Company as a guarantee of payment of war cost. For the Dutch, a stable Mataram empire that was deeply indebted to them would help ensure continued trade on favorable terms. They were willing to lend their military might to keep the kingdom together. The multinational Dutch forces, consisting of light-armed troops from Makasar and Ambon, in addition to heavily equipped European soldiers, first defeated Trunajaya in Kediri in November 1678, and Trunajaya himself was captured in 1679 near Ngantang west of Malang, and killed by Amangkurat II with his own hand on 2 January 1680.

Upon accession to throne, Amangkurat II came to Kadilangu, Demak Regency, to meet Panembahan Natapraja, a wise, invulnerable, and smart elder who had soldiers who were ready to help Amangkurat I. Panembahan Natapraja, as a descendant of Sunan Kalijaga, were asked to rewrite history of Java because the original manuscript had been burned by rebels. This became the origin of Babad Tanah Jawi as known in the next era. Amangkurat II also made an alliance and treaty with Dutch East India Company to gain weaponry support to make a revenge toward Giri Kedaton.

Panembahan Ageng Giri was captured and sentenced to death by whip. His family was also exterminated. This marked the end of Giri Kedaton.

Since the fallen Plered was considered inauspicious, Amangkurat II built a new palace in Wanakarta forest, and moved the capital to Kartasura in the land of Pajang (the northern part of the stretch of land between Mount Merapi and Mount Lawu, the southern part being Mataram).

Prince Puger, who initially stayed in Kajenar, moved to Plered after being left by Trunajaya. He refused to join with Amangkurat II because he heard a news that Amangkuray II wasn't RM. Rahmat (his half-brother), rather Cornelis Speelman's son disguised as RM. Rahmat. The confusing news ultimately caused a chaotic condition.

The war between Plered and Kartasura occurred in November 1680. Babad Tanah Jawi mentions it as a war between Mataram and Kartasura. Then, in 1681, the alliance of Dutch and Amangkurat II forced Prince Puger, his younger half-brother, who styled himself Susuhunan ing Alaga when he seized the throne, to relinquish it after he surrendered in 28 November 1681.

Babad Tanah Jawi relates that Mataram Sultanate had fallen in 1677, and Sunanate of Kartasura was a new successor of Mataran, legitimized by Panembahan Natapraja of Kadilangu who was considered as Mataram elder.

Attitude toward the Dutch

Javanese chronicles depicts Amangkurat II as a weak ruler who was easy to influence. Prince Puger, his half-brother, had a more role in government. Amangkurat II ascended to throne with Dutch help and left a debt for war cost as high as 2.5 million guilders. An anti-Dutch official, Patih Nerangkusuma, was successful to persuade him to free from the debt.

By providing help in regaining his throne, the Dutch brought Amangkurat II under their tight control. Amangkurat II was apparently unhappy with the situation, especially the increasing Dutch control of the coast, but he was helpless in the face of a crippling financial debt and the threat of Dutch military power. The king engaged in a series of intrigues to try to weaken the Dutch position without confronting them head on. For example, he tried to cooperate with other kingdoms such as Cirebon and Johor, and the court sheltered people wanted by the Dutch for attacking colonial offices or disrupting shipping, such as Untung Surapati. Amangkurat II gave him a residence in Babirong village, and Untung Surapati arranged his strength there.

In 1685, Batavia (now Jakarta) sent Captain Francois Tack, the officer who captured Trunajaya, to Amangkurat's court at Kartasura, to capture Surapati and negotiate further details into the agreement between VOC and Amangkurat II. François Tack was killed when pursuing Surapati in Kartasura, but Batavia decided to do nothing since the situation in Batavia itself was far from stable, such as the insurrection of Captain Jonker, native commander of Ambonese settlement in Batavia, in 1689. Mainly due to this incident, by the end of his reign, Amangkurat II was deeply distrusted by the Dutch, but Batavia were similarly uninterested in provoking another costly war on Java.

Amangkurat II then approved Untung Suropati and Nerangkusuma to seize Pasuruan Regency. Anggajaya, Regent of Pasuruan who was initially appointed by Amangkurat II himself had to be victim. He escaped to Surabaya, joined with his brother, Anggawangsa alias Duke Jangrana.

The ambiguous attitude of Amangkurat II was discovered by Dutch East India Company, who found Amangkurat II's letters to Sultanates of Cirebon, Johor, Palembang, and Kingdom of England, which urged to wage a war with Dutch Republic. Amangkurat II also supported Captain Jonker's revolt in 1689.

The Dutch East India Company made a pressure to Kartasura to pay war cost as high as 2.5 million guilders. Amangkurat II himself attempted to improve the relation by pretending to invade Untung Suropati in Pasuruan.

Amangkurat II died in 1703 and was briefly succeeded by his son, Amangkurat III (r. 1703–1705), whose reign was marked by First Javanese War of Succession.

Retrieved from "https://en.wikipedia.org/w/index.php?title=Amangkurat_II_of_Mataram&oldid=999765866"
Uses material from the Wikipedia article Amangkurat II of Mataram, released under the CC BY-SA 3.0 license.