The term American folk music encompasses numerous music genres, variously known as traditional music, traditional folk music, contemporary folk music, or roots music. Many traditional songs have been sung within the same family or folk group for generations, and sometimes trace back to such origins as Great Britain, Europe, or Africa. Musician Mike Seeger once famously commented that the definition of American folk music is "...all the music that fits between the cracks."

Roots music is a broad category of music including bluegrass, gospel, old time music, jug bands, Appalachian folk, blues, Cajun and Native American music. The music is considered American either because it is native to the United States or because it developed there, out of foreign origins, to such a degree that it struck musicologists as something distinctly new. It is considered "roots music" because it served as the basis of music later developed in the United States, including rock and roll, rhythm and blues, and jazz.

Most songs of the Colonial and Revolutionary periods originated in England, Scotland and Ireland and were brought over by early settlers. "Barbara Allen" remains a popular traditional ballad originating in England and Scotland, which immigrants introduced to the United States. The murder ballad "Pretty Polly" is an American version of an earlier British song, "The Gosport Tragedy".

African American folk music in the area has roots in slavery and emancipation. "Sacred music, both a Capella and instrumentally accompanied, is at the heart of the tradition. Early spirituals framed Christian beliefs within native practices and were heavily influenced by the music and rhythms of Africa." Spirituals are prominent, and often use a call and response pattern. "Gospel developed after the Civil War (1861-65). It relied on biblical text for much of its direction, and the use of metaphors and imagery was common. Gospel is a "joyful noise," sometimes accompanied by instrumentation and almost always punctuated by hand clapping, toe tapping, and body movement."

Sea shanties functioned to lighten the burden of routine tasks and provide a rhythm that helped workers perform as a team.

Cowboys songs are typically ballads that cowboys sang in the West and Southwest. The familiar Streets of Laredo" (or "Cowboys Lament") derives from an Irish folk song of the late 18th century called "The Unfortunate Rake", which in turn appears to have descended from the even earlier "The Bard of Armagh". While "Streets of Laredo" uses the same melody as "The Unfortunate Rake", "St. James Infirmary Blues" adapts the story to a different tune. This illustrates how folk songs can change in the retelling and appear in a variety of versions.

The "Ballad of John Henry (folklore)" is about an African-American folk hero said to have worked as a "steel-driving man".

Many roots musicians do not consider themselves folk musicians. The main difference between the American folk music revival and American "roots music" is that roots music seems to cover a broader range, including blues and country.

Roots music developed its most expressive and varied forms in the first three decades of the 20th century. The Great Depression and the Dust Bowl were extremely important in disseminating these musical styles to the rest of the country, as Delta blues masters, itinerant honky tonk singers, Cajun musicians spread to cities like Chicago, Los Angeles, and New York. The growth of the recording industry in the same period was also important; higher potential profits from music placed pressure on artists, songwriters, and label executives to replicate previous hit songs. This meant that musical fads, such as Hawaiian slack-key guitar, never died out completely, since a broad range of rhythms, instruments, and vocal stylings were incorporated into disparate popular genres.

By the 1950s, forms of roots music had led to pop-oriented forms. Folk musicians like the Kingston Trio, blues-derived rock and roll and rockabilly, pop-gospel, doo wop and R&B (later secularized further as soul music) and the Nashville sound in country music all modernized and expanded the musical palette of the country.

The roots approach to music emphasizes the diversity of American musical traditions, the genealogy of creative lineages and communities, and the innovative contributions of musicians working in these traditions today. In recent years roots music has been the focus of popular media programs such as Garrison Keillor's public radio program, A Prairie Home Companion and the feature film by the same name.

American traditional music is also called roots music. Roots music is a broad category of music including bluegrass, country music, gospel, old time music, jug bands, Appalachian folk, blues, Cajun and Native American music. The music is considered American either because it is native to the United States or because it developed there, out of foreign origins, to such a degree that it struck musicologists as something distinctly new. It is considered "roots music" because it served as the basis of music later developed in the United States, including rock and roll, contemporary folk music, rhythm and blues, and jazz.

Appalachian music is the traditional music of the region of Appalachia in the Eastern United States. It derives from various European and African influences—including English ballads, Irish and Scottish traditional music (especially fiddle music), hymns, and African-American blues. First recorded in the 1920s, Appalachian musicians were a key influence on the early development of Old-time music, country music, and bluegrass, and were an important part of the American folk music revival.

The Carter Family was a traditional American folk music group that recorded between 1927 and 1956. Their music had a profound impact on bluegrass, country, Southern Gospel, pop and rock musicians. They were the first vocal group to become country music stars; a beginning of the divergence of country music from traditional folk music. Their recordings of such songs as "Wabash Cannonball" (1932), "Will the Circle Be Unbroken" (1935), "Wildwood Flower" (1928), and "Keep on the Sunny Side" (1928) made them country standards.

Cajun music, an emblematic music of Louisiana, is rooted in the ballads of the French-speaking Acadians of Canada. Cajun music is often mentioned in tandem with the Creole-based, Cajun-influenced zydeco form, both of Acadiana origin. These French Louisiana sounds have influenced American popular music for many decades, especially country music, and have influenced pop culture through mass media, such as television commercials.

Oklahoma and southern US plains 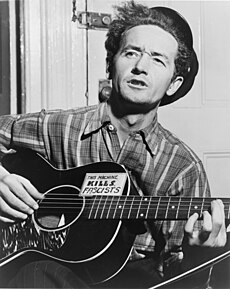 Singer-songwriter Woody Guthrie emerged from the dust bowl of Oklahoma and the Great Depression in the mid-20th Century, with lyrics that embraced his views on ecology, poverty, and unionization in the USA., paired with melody reflecting the many genres of American folk music.

Before recorded history American Indians in this area used songs and instrumentation; music and dance remain the core of ceremonial and social activities. "Stomp dance" remains at its core, a "call and response" form; instrumentation is provided by rattles or shackles worn on the legs of women. "Other southeastern nations have their own complexes of sacred and social songs, including those for animal dances and friendship dances, and songs that accompany stickball games.

Central to the music of the southern Plains Indians is the drum, which has been called the heartbeat of Plains Indian music. Most of that genre traces back to the hunting and warfare that was a strong part of plains culture. During the reservation period, they frequently used music to relieve boredom and despair. Neighbors gathered, exchanged and created songs and dances. This is a part of the roots of the modern intertribal powwow. Another common instrument is the courting flute.

Shape-note or sacred harp singing developed in the early nineteenth century as a way for itinerant singing instructors to teach church songs in rural communities. They taught using song books that represented musical notation of tones by geometric shapes that associated a shape with a pitch. Sacred harp singing became popular in many Oklahoma rural communities, regardless of ethnicity.

Later, the blues tradition developed, with roots in and parallels to sacred music. By the early 20th century, jazz developed, born from a "blend of ragtime, gospel, and blues" "Anglo-Scots-Irish music traditions gained a place in Oklahoma after the Land Run of 1889. Because of its size and portability, the fiddle was the core of early Oklahoma Anglo music, but other instruments such as the guitar, mandolin, banjo, and steel guitar were added later. Various Oklahoma music traditions trace their roots to the British Isles, including cowboy ballads, western swing, and contemporary country and western." "Mexican immigrants began to reach Oklahoma in the 1870s, bringing beautiful canciones and corridos love songs, waltzes, and ballads along with them. Like American Indian communities, each rite of passage in Hispanic communities is accompanied by traditional music.

The acoustic guitar, string bass, and violin provide the basic instrumentation for Mexican music, with maracas, flute, horns, or sometimes accordion filling out the sound." Other Europeans (such as Bohemians and Germans) settled in the late nineteenth century. Their social activities centered on community halls, "where local musicians played polkas and waltzes on the accordion, piano, and brass instruments."

Later Asians contributed to the musical mix. "Ancient music and dance traditions from the temples and courts of China, India, and Indonesia are preserved in Asian communities throughout the state, and popular song genres are continually layered on to these classical music forms"

The American Southwest and South Texas

Tejano and New Mexico music, heard throughout the American Southwest and South Texas, is rooted in the musics of the Native American and Hispanic/Latino communities of the regions. Tejano music is also heavily influenced by Regional Mexican and Country music, while New Mexico music is much more influenced by Hispano folk and Western music. Both styles have influenced one another over the years, and incorporated American popular music styles.

Starting in the mid-20th century a phenomenon termed the folk music revival began, forming a new contemporary type of folk music. It was somewhat centered on but not limited to the United States. While sometimes termed the American Folk Music Revival, it was somewhat international and does not fit some narrower definitions of American folk music even when the artists were American. Prominent artists from this movement include Pete Seeger, Woody Guthrie, The Weavers, Burl Ives, and others. A more commercially oriented version of folk music emerged in the 1960s, including performers such as The Kingston Trio, The Limeliters, The Brothers Four, Peter, Paul and Mary, Joan Baez, The Highwaymen, Judy Collins, The New Christy Minstrels, and Gordon Lightfoot, as well as counterculture and folk rock performers including Bob Dylan, The Byrds, Arlo Guthrie, and Buffy Sainte-Marie.

In 2007, James P. Leary published Polkabilly: How the Goose Island Ramblers Redefined American Folk Music, which proposes a redefinition of traditional American folk music and identifies a new genre of music from the Upper Midwest known as Polkabilly, which blends ethnic music, old-time country music, and polka. The book was awarded the American Folklore Society’s Chicago Folklore Prize for the best book in the field of folklore scholarship.

Hootenanny, a weekly musical variety show broadcast on the ABC network in the U.S. in 1963–1964, primarily featured folk musicians.

The soundtrack of the 2000 film O Brother, Where Art Thou? is exclusively roots music, performed by Alison Krauss, The Fairfield Four, Emmylou Harris, Norman Blake and others.

In 2001, PBS broadcast a 4-part documentary series, American Roots Music, that explored the historical roots of American roots music through footage and performances by the creators of the movement.

A six-hour public television series, The Music of America: History Through Musical Traditions, appeared in 2010.