He is responsible for two notable 14th-century portolan charts, the "Dalorto" chart of 1325 and the "Dulcert" chart of 1339. The latter is the first portolan known to have been produced in Palma, and considered the founding piece of the Majorcan cartographic school. He is also believed to be the author of a third undated and unsigned chart held in London.

Virtually nothing is known of Angelino Dulceti/Dolcet/Dalorto/Dulcert. A common assumption is that he was an Italian of Liguria, who trained in Genoa and subsequently emigrated to Majorca some time in the 1320s or 1330s.

Angelino 'Dalorto' was once thought connected to the notable Genoese "Dell' Orto" family. The latter were known to be active in the Black Sea and the Asian trade, e.g. in 1340, Pope Benedict XII speaks of receiving a Petraneus da Lorto, former Genoese governor of Caffa and emissary of Uzbeg Khan of the Golden Horde. It was conjectured that Angelino Dalorto moved to Majorca, possibly as a commercial agent for his family's trading house, and took up the name 'Dulcert' as a more Catalan-sounding version of his surname.

However, more recent readings claim the signatures on the maps have been previously misread, that the 'Dalorto' in the 1325 chart should be read as "Dulceto" and the "Dulcert" in the 1339 chart is in fact "Dulceti". This implies Angelino originates from Dulceto, or Dulcedo, a small Italian town in Liguria, a little down the coast from Genoa. This reinforces the common assumption that he was an Italian immigrant who settled in Majorca. However, others have noted the existence of the "Dolcet" surname in earlier Majorcan records.

The identity and nationality of Angelino Dulceti/Dolcet/Dalorto/Dulcert has been a longstanding item of contention between scholars, often attenuated by nationalist sentiments. Scholars who seek to claim Dulcert to be wholly of Catalan, nationality have tended to argue that Dalorto and Dulcert are two different men, that the Catalan Dulcert might simply have been "inspired" by the Genoese Dalorto. Pujades (2007), touching only briefly on the controversy, concludes

Part of 1325 portolan of Angelino Dalorto

Angelino "Dalorto" is known for a portolan chart commonly dated 1325 (now revised to 1330), privately held by the Prince Corsini collection in Florence. Its signature was traditionally read as "Hoc opus fecit Angelinus de Dalorto ano dñi MCCXXV de mense martii composuit hoc" (and since re-read as "Angelinus de Dulceto'" and "ano dñi MCCXXX", thus the revision of the name to "Dulceto" and the year to 1330).

In many ways, the 1325 Dalorto portolan marks a transition point in European portolans, between the Genoese and Majorcan cartographic schools. For the most part, Dalorto follows the restrained coast-focused Italian style, exemplified by the early portolans of his Genoese predecessor Pietro Vesconte, but he also begins moving away from its sparseness by illustrating inland details, such as miniature cities, mountain ranges and rivers, a tendency will flourish in the later Majorcan school. Indeed, some of Dalorto's details here presage the standard Majorcan stylings (e.g. Red Sea colored red, the Atlas Mountains shaped like a palm tree, the chicken-foot Alps, the Danube's "hillocks").

Among its advances in geographic knowledge, the Dalorto map gives a better picture of northern Europe (particularly the Baltic Sea) than its predecessors.

The Dalorto chart is also the first to depict the legendary island of Brasil, as circular disk-shaped island southwest of Ireland. It is denoted by the caption "Insula de montonis siue de brazile" ("isle of sheep (?) or of brasil"). 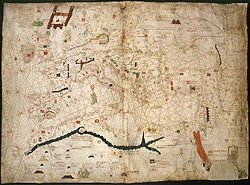 Angelino "Dulcert" is known for a portolan chart dated 1339 and held by the Bibliotheque Nationale de France in Paris, France (B.696). Its signature reads: "ano MCCCXXXVIIII mense Augusto Angelino Dulcert in civitate Maioricarum composuit". Unlike its predecessor, it is composed not on a single vellum, but on two parchment pages, joined together as a single map, measuring 75 × 102 cm.

Made in Palma, the Dulcert 1339 map is considered the founding piece of the Majorcan cartographic school. Although some of its features were already presaged in the Dalorto map, it goes further in the inland illustrations, in particular including miniature illustrations of people.

In many ways, the Dulcert 1339 map is very similar to the 1325 Dalorto map. On the other hand, the portolan's keys and legends are written in Latin, and it contains features not usually found on Genoese or Venetian portolans.

The 1339 Dulcert map is notable for giving the first modern depiction of the island of Lanzarote, one of the Canary Islands, as Insula de Lanzarotus Marocelus, a reference to the Genoese navigator Lancelotto Malocello, and affixes a Genoese shield to mark the island (a custom which will be retained by future mapmakers).

Dulcert also introduces what seems like the Madeira islands, named here as Capraria and Canaria (legendary names for two of the Fortunate Islands of classical antiquity, as found in, e.g. Ptolemy).

The oldest heraldic representation connected with Macedonia surviving to the present time, or discovered so far, is the banner of Skopje, on the Dulcert 1339 Map, with blazon: Or, double-headed eagle Gules. Above the name of the city of "Scopi" is written "Servia" (Serbia).

In the 20th century, a third map has emerged, which is unsigned and which has become commonly attributed to Angelino Dulceti/Dolcet/Dalorto/Dulcert on account of its features. It is held by the British Library in London, UK (Add.MS.25691). It thought to have been composed sometime in the 1340s, although some scholars have suggested it may even precede the Dalorto 1325 map.