Animal Crossing is a social simulation video game series developed and published by Nintendo and created by Katsuya Eguchi. In Animal Crossing, the player character is a human who lives in a village inhabited by various anthropomorphic animals, carrying out various activities such as fishing, bug catching, and fossil hunting. The series is notable for its open-ended gameplay and extensive use of the video game console's internal clock and calendar to simulate real passage of time.

While the series features various villagers for each title, certain prominent characters return in each series installment. Tom Nook is a tanuki character who functions as both a shop owner and real estate broker, giving the player a loan for their house and allowing them to pay it back with no interest. He is one of the only residents of the town to follow a capitalist ethos and engage in deceptive business practices. Mr. Resetti is a mole character who appears from underground whenever players shut off the game without saving, berating them for circumventing one of the game's systems. Due to a new autosave function, he was "laid off" from his job in Animal Crossing: New Horizons, although he will be making a return in some form.

K.K. Slider is a canine traveling musician based on series composer Kazumi Totaka, and plays on certain nights in the town's club. Afterwards, he gifts the player a free copy of the song played, saying that his music "wants to be free". This was seen by some fans as tacit support for music piracy, although Nintendo denied that it was intended as social commentary.

In the Animal Crossing games, the player assumes the role of a human character who moves into a rural village populated with anthropomorphic animals and lives there indefinitely. Gameplay is open-ended: players have no defined objectives, but are instead encouraged to spend their time in the village performing any number of activities, which include collecting items, planting plants or other items, and socializing with the village's residents. Animal Crossing games are played in real time, utilizing the video game console's internal clock and calendar. Thus, passage of time in the game world reflects that in reality, as well as the current season and time of day. Some in-game events, such as holidays or the growth of a tree, occur at certain times or require some duration of time to have passed.

One notable feature of the Animal Crossing series is the high level of customization available, some of which affects the outcome of the game. The player character is both named and gendered by the real life player at the start of the game, and their appearance can be modified by buying or designing custom clothes and accessories or changing the hairstyle (introduced in Wild World). The player's house can also be furnished, decorated, and later expanded: the player can purchase and collect furniture and place it anywhere in the house, as well as change both the wallpaper and floor designs. While its terrain, building locations, and initial residents are randomly generated when the game is first begun (except in Animal Crossing: New Leaf, in which the player decides between four given towns, and Animal Crossing: New Horizons, in which the player similarly decides between four given islands), the village's name and anthem, as well as some of the residents' catchphrases, are also determined by the player.

Collecting items is a major facet of Animal Crossing: the player can explore the village and gather objects, including fruit from trees, seashells, and discarded items. Nearly all objects can be sold for Bells, the in-game currency. Players collect objects to obtain more Bells, which can then be used to buy furniture and clothing, purchase home expansions, invest in stocks, and play games. A number of specialized tools are available for other activities such as fishing and insect collecting. Special items, such as fossils and paintings, may be donated to the village museum. The player can choose to socialize with the other animal residents by engaging in conversation, sending and receiving letters, bartering, or playing hide-and-seek. Residents may move in or out of the village depending on the player's actions.

All installments of Animal Crossing allow some form of communication between players, both offline and online. A single village can house up to four human players, though only one can be exploring the village at any given time. The players can interact via written messages through the village post office or bulletin board. The GameCube iteration allowed players to travel to other villages by trading memory cards written with the game data, but all subsequent installments allow players to travel and interact online via Nintendo Wi-Fi Connection, although City Folk also allows the DS Suitcase to travel to others' towns.

Animal Crossing: Wild World was released for the Nintendo DS in Japan on November 23, 2005, North America on December 5, 2005, Australia on December 8, 2005, and Europe on March 31, 2006. It was the first game in the series to use Nintendo Wi-Fi Connection. The game was later re-released on the Wii U Virtual Console on October 13, 2016, although its Wi-Fi multiplayer feature is unavailable due to the discontinuation of Nintendo Wi-Fi Connection.

Animal Crossing: City Folk, known as Animal Crossing: Let's Go to the City in Europe and Australia, was released for the Wii in North America on November 16, 2008, Japan on November 20, 2008, Australia on December 4, 2008, and Europe on December 5, 2008. It was later released in South Korea in 2010. It was the first Wii game to utilize the Wii Speak, an accessory that allows players to talk to each other during online play.

Animal Crossing: New Leaf was announced at E3 2010. It was released for the Nintendo 3DS in Japan on November 8, 2012, North America on June 9, 2013, Europe on June 14, 2013, and Australia on June 15, 2013. For the first time in the series, players are appointed to the role of Mayor. In November 2016, a new update was released along with "Welcome Amiibo" in North America and Europe, adding several new locations, items and activities.

A game in the series for Nintendo Switch was announced in a Nintendo Direct in September 2018 known as Animal Crossing: New Horizons. Set on a deserted island, it was released on March 20, 2020.

Animal Crossing: Happy Home Designer is a community simulation game for the Nintendo 3DS and the first spin-off of the Animal Crossing series. It was released in Japan on July 30, 2015, North America on September 25, 2015, Europe on October 2, 2015, and Australia on October 3, 2015. The game revolves around designing houses for villagers based on their requests. By scanning Amiibo cards, players can unlock the ability to design special characters' houses. The game has a score of 66 out of 100 on Metacritic, which signifies "mixed or average reviews".

Animal Crossing: Amiibo Festival is a party video game for the Wii U released in November 2015 that heavily utilizes Amiibo. It was met with unfavorable reviews from critics. It was developed by NDcube and Nintendo Entertainment Planning & Development.

In April 2016, Nintendo announced that an Animal Crossing mobile game, later named as Animal Crossing: Pocket Camp, would be released as a part of their mobile game lineup. The game was soft launched in Australia in October 2017, and released worldwide on November 21, 2017.

The Animal Crossing games have garnered positive response. The four main series games are among the best-selling video games for their respective consoles. Animal Crossing has sold 2.32 million copies; Wild World 11.75 million; City Folk 3.38 million; New Leaf 12.21 million, and Happy Home Designer 3.04 million. Amiibo Festival was a critical and commercial failure; in Japan it has only sold 26,325 copies. In total, the Animal Crossing franchise has sold over 30 million units.

Former president of Nintendo, Satoru Iwata noted that 56% of people who pre-ordered Animal Crossing: New Leaf identify as female, with many of them purchasing a Nintendo 3DS specifically for the game. He found the game's success with adult women between the ages of 19 to 24 to be particularly noteworthy. 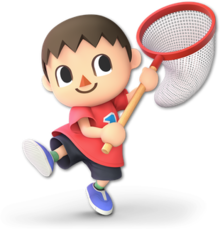 The male Villager, as depicted in Super Smash Bros. Ultimate

An anime film adaptation of Wild World, titled Dōbutsu no Mori, was released in Japan on December 16, 2006. The film was produced by OLM, Inc. and distributed by Toho. Dōbutsu no Mori earned ¥1.8 billion (approximately $19.2 million) in the box office.

In the Wii game WarioWare: Smooth Moves, released in Japan in 2006 and Europe, North America and Australia in 2007, there is a minigame that is modeled after Animal Crossing: Wild World, under the same name. The player has to catch a fish using the same mechanics as the original game.

The 2008 Wii game Super Smash Bros. Brawl features elements from Wild World. Most prominent is a stage based on the animal village, called "Smashville", which changes its scenery in accordance with the Wii system clock and features a number of songs remixed or extracted from the original game. Mr. Resetti and a pitfall seed, which appear in all Animal Crossing games, are available as an Assist Trophy and an item respectively. Brawl also features 24 collectible trophies based on Animal Crossing characters and items.

The minigame "Animal Crossing: Sweet Day" in Nintendo Land is based on the Animal Crossing game series. The objective of the game is for the Wii Remote players (1-4), to gather large amounts of candy scattered around the area and store them in their head without getting caught by the Gatekeepers, who are controlled using the two Wii U GamePad analog sticks.

A playable character called "Villager" represents the Animal Crossing series as a fighter in Super Smash Bros. for Nintendo 3DS and Wii U and Super Smash Bros. Ultimate. The character has both male and female forms, which are selected when choosing the character. His or her moves include the ability to catch other players in a net and firing Lloid the gyroid as a missile. Additionally, Isabelle from New Leaf appears as an Assist Trophy, and later appeared as a standalone fighter in Ultimate. Two new Animal Crossing stages appear in the games: "Town & City" from City Folk in the Wii U version, and "Tortimer Island" from New Leaf in the 3DS version. "Smashville" from Brawl returns in the Wii U version.

Villager and Isabelle are playable characters in Mario Kart 8 via downloadable content, along with a racetrack based on Animal Crossing and a cup named after the series known as the "Crossing Cup". The two racers, along with the Animal Crossing track, were also included in the Nintendo Switch version of the game, Mario Kart 8 Deluxe along with a racing suit based on the series for the Mii. In June 2015, Isabelle and Mr. Resetti-themed cosmetics were added as costumes options for the player's "Palico" companion in Monster Hunter 4 Ultimate.