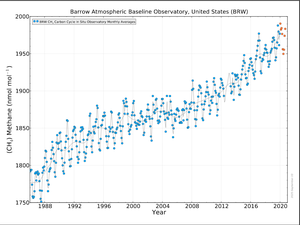 Arctic methane release is the release of methane from seas and soils in permafrost regions of the Arctic. While it is a long-term natural process, methane release is exacerbated by global warming. This results in negative effects, as methane is itself a powerful greenhouse gas.

The Arctic region is one of the many natural sources of the greenhouse gas methane. Global warming accelerates its release, due to both release of methane from existing stores, and from methanogenesis in rotting biomass. Large quantities of methane are stored in the Arctic in natural gas deposits, permafrost, and as undersea clathrates. Permafrost and clathrates degrade on warming, thus large releases of methane from these sources may arise as a result of global warming. Other sources of methane include submarine taliks, river transport, ice complex retreat, submarine permafrost and decaying gas hydrate deposits.

Concentrations in the Arctic atmosphere are higher by 8–10% than that in the Antarctic atmosphere. During cold glacier epochs, this gradient decreases to practically insignificant levels. Land ecosystems are considered the main sources of this asymmetry, although it has been suggested that "the role of the Arctic Ocean is significantly underestimated." Soil temperature and moisture levels have been found to be significant variables in soil methane fluxes in tundra environments.

The release of methane from the Arctic is in itself a major contributor to global warming as a result of polar amplification. Recent observations in the Siberian arctic show increased rates of methane release from the Arctic seabed. Land-based permafrost, also in the Siberian arctic, was estimated in 2013 to release 17 million tonnes of methane per year – a significant increase on the 3.8 million tons estimated in 2006, and estimates before then of just 0.5 million tonnes. This compares to around 500 million tonnes released into the atmosphere annually from all sources.

Shakhova et al. (2008) estimate that not less than 1,400 gigatonnes (Gt) of carbon is presently locked up as methane and methane hydrates under the Arctic submarine permafrost, and 5–10% of that area is subject to puncturing by open taliks. They conclude that "release of up to 50 Gt of predicted amount of hydrate storage [is] highly possible for abrupt release at any time". That would increase the methane content of the planet's atmosphere by a factor of twelve.

In 2008 the United States Department of Energy National Laboratory system identified potential clathrate destabilization in the Arctic as one of the most serious scenarios for abrupt climate change, which have been singled out for priority research. The US Climate Change Science Program released a report in late December 2008 estimating the gravity of the risk of clathrate destabilization, alongside three other credible abrupt climate change scenarios.

Study findings based on NASA's CARVE mission concluded in 2015, that methane emissions in the Arctic during the cold season are higher than previously thought. The press release by JPL explained:

Hong et al. (2017) studied the seepage from large mounds of hydrates in the shallow arctic seas at Storfjordrenna, in the Barents Sea close to Svalbard. They showed that though the temperature of the sea bed has fluctuated seasonally over the last century, between 1.8 and 4.8 °C, it has only affected release of methane to a depth of about 1.6 meters. Hydrates can be stable through the top 60 meters of the sediments and the current rapid releases came from deeper below the sea floor. They concluded that the increase in flux started hundreds to thousands of years ago well before the onset of warming that others speculated as its cause, and that these seepages are not increasing due to momentary warming. Summarizing his research, Hong stated:

Further research by Klaus Wallmann et al. (2018) found that the hydrate release is due to the rebound of the sea bed after the ice melted. The methane dissociation began around 8,000 years ago when the land began to rise faster than the sea level, and the water as a result started to get shallower with less hydrostatic pressure. This dissociation therefore was a result of the uplift of the sea bed rather than anthropogenic warming. The amount of methane released by the hydrate dissociation was small. They found that the methane seeps originate not from the hydrates but from deep geological gas reservoirs (seepage from these formed the hydrates originally). They concluded that the hydrates acted as a dynamic seal regulating the methane emissions from the deep geological gas reservoirs and when they were dissociated 8,000 years ago, weakening the seal, this led to the higher methane release still observed today.

A 2014 study found evidence for methane cycling below the ice sheet of the Russell Glacier, based on subglacial drainage samples which were dominated by Proteobacteria. During the study, the most widespread surface melt on record for the past 120 years was observed in Greenland; on 12 July 2012, unfrozen water was present on almost the entire ice sheet surface (98.6%). The findings indicate that methanotrophs could serve as a biological methane sink in the subglacial ecosystem, and the region was, at least during the sample time, a source of atmospheric methane. Scaled dissolved methane flux during the 4 months of the summer melt season was estimated at 990 Mg CH4. Because the Russell-Leverett Glacier is representative of similar Greenland outlet glaciers, the researchers concluded that the Greenland Ice Sheet may represent a significant global methane source. A study in 2016 concluded that methane clathrates may exist below Greenland's and Antarctica's ice sheets, based on past evidence. 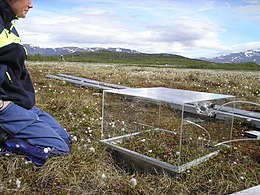 Sea ice loss is correlated with warming of Northern latitudes. This has melting effects on permafrost, both in the sea, and on land. Lawrence et al. suggest that current rapid melting of the sea ice may induce a rapid melting of arctic permafrost. This has consequential effects on methane release, and wildlife. Some studies imply a direct link, as they predict cold air passing over ice is replaced by warm air passing over the sea. This warm air carries heat to the permafrost around the Arctic, and melts it. This permafrost then releases huge quantities of methane. Methane release can be gaseous, but is also transported in solution by rivers. New Scientist states that "Since existing models do not include feedback effects such as the heat generated by decomposition, the permafrost could melt far faster than generally thought." Analyses of data from an expedition to remote outposts in the Canadian Arctic in 2016 indicated that permafrost is thawing 70 years earlier than predicted.

There is another possible mechanism for rapid methane release. As the Arctic Ocean becomes more and more ice free, the ocean absorbs more of the incident energy from the sun. The Arctic Ocean becomes warmer than the former ice cover and much more water vapour enters the air. At times when the adjacent land is colder than the sea, this causes rising air above the sea and an off-shore wind as air over the land comes in to replace the rising air over the sea. As the air rises, the dew point is reached and clouds form, releasing latent heat and further reinforcing the buoyancy of the air over the ocean. All this results in air being drawn from the south across the tundra rather than the present situation of cold air flowing toward the south from the cold sinking air over the Arctic Ocean. The extra heat being drawn from the south further accelerates the warming of the permafrost and the Arctic Ocean with increased release of methane.

Sinkholes discovered in the Yamal Peninsula in Siberia, Russia beginning in July 2014 are believed by Russian researchers to have been caused by methane released due to permafrost thawing. Near the bottom of the first sinkhole, air contained unusually high concentrations of methane, according to tests conducted by the researchers. This hypothesis points to the destabilization of gas hydrates containing huge amounts of methane gas.

According to researchers at Norway's Centre for Arctic Gas Hydrate (CAGE), through a process called geothermal heat flux, the Siberian permafrost which extends to the seabed of the Kara Sea, a section of the Arctic Ocean between the Yamal Peninsula and Novaya Zemlya, is thawing. According to a CAGE researcher, Aleksei Portnov,

Methane hydrate is leaking in an area of at least 7500 m2. In some areas gas flares extend up to 25 m (82 ft). Prior to their research it was proposed that methane was tightly sealed into the permafrost by water depths up to 100 m (330 ft). Close to the shore however, where the permafrost seal tapers to as little as 20 m (66 ft), there are significant amounts of gas leakage.

The Permian–Triassic extinction event (the Great Dying) may have been caused by release of methane from clathrates. An estimated 52% of marine genus became extinct, representing 96% of all marine species.

Sea ice, and the cold conditions it sustains, serves to stabilise methane deposits on and near the shoreline, preventing the clathrate breaking down and outgassing methane into the atmosphere, causing further warming. Melting of this ice may release large quantities of methane, a powerful greenhouse gas into the atmosphere, causing further warming in a strong positive feedback cycle.

Even with existing levels of warming and melting of the Arctic region, submarine methane releases linked to clathrate breakdown have been discovered, and demonstrated to be leaking into the atmosphere. A 2011 Russian survey off the East Siberian coast found plumes wider than one kilometer releasing methane directly into the atmosphere.

According to monitoring carried out in 2003/2004 by Shakhova et al., the surface layer of shelf water in the East Siberian Sea and Laptev Sea was supersaturated up to 2500% relative to then present average atmospheric methane content of 1.85 ppm. Anomalously high concentrations (up to 154 nM or 4400% supersaturation) of dissolved methane in the bottom layer of shelf water suggest that the bottom layer is somehow affected by near-bottom sources. Considering the possible formation mechanisms of such plumes, their studies indicated thermoabrasion and the effects of shallow gas or gas hydrates release.

Research in 2008 in the Siberian Arctic has shown clathrate-derived methane being released through perforations in the seabed permafrost.

The climatic effects of a potential release of methane from global ocean clathrates may be significant on timescales of 1–100 thousand years, depending on the water temperature.