The foundation for what became the Army National Guard occurred in the city of Salem, Massachusetts, in 1692, the first time that a regiment of militia drilled for the common defense of a multi-community area.

The Army National Guard's portion of the president's proposed federal budget for Fiscal Year 2018 is approximately $16.2 billion to support an end strength of 343,000, including appropriations for personnel pay and allowance, facilities maintenance, construction, equipment maintenance and other activities.

Main article: Prominent members of the US Army National Guard

Main article: List of Presidents of the United States by military service

Of the 45 individuals to serve as President of the United States as of 2021[update], 33 had military experience. Of those 33, 21 served in the militia or Army National Guard.

(Note: President George W. Bush served in the National Guard in the late 1960s and early 1970s, and he was the first Air National Guard member to attain the presidency.)

In addition, United States Army Reserve units participating in the program include:

The Army and Air National Guard in each state are headed by the State Adjutant General. The Adjutant General (TAG) is the de facto commander of a state's military forces, and reports to the state governor.

Shoulder sleeve insignia of the 47th Infantry Division, inactivated in 1991

Shoulder sleeve insignia of the 50th Armored Division, inactivated in 1993

Several units have been affected by Army National Guard reorganizations. Some have been renamed or inactivated. Some have had subordinate units reallocated to other commands. A partial list of inactivated major units includes: 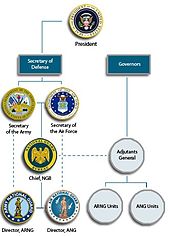 The director of the Army National Guard oversees a staff which aids in planning and day-to-day organization and management. In addition to a chief of staff, the Director's staff includes several special staff members, including a chaplain and protocol and awards specialists. It also includes a primary staff, which is organized as directorates, divisions, and branches. The directorates of the Army National Guard staff are arranged along the lines of a typical American military staff: G-1 for personnel; G-2 for intelligence; G-3 for plans, operations and training; G-4 for logistics; G-5 for strategic plans, policy and communications; G-6 for communications; and G-8 for budgets and financial management.