Arturo Di Modica (January 26, 1941 – February 19, 2021) was an Italian-born, American sculptor, widely known for his Charging Bull sculpture which he left outside the New York Stock Exchange on December 15, 1989, as his gift to the United States. He arrived in New York penniless in 1970 and rose to success. In 1987, Black Monday struck the U.S. stock markets by which point Di Modica felt indebted to the country. Charging Bull was intended by Di Modica to inspire everyone who came into contact with it to carry on fighting through hard times for the future.

In 2018, Di Modica was quoted by art writer Anthony Haden Guest describing his motivation for Charging Bull as "My point was to show people that if you want to do something in a moment things are very bad, you can do it. You can do it by yourself. My point was that you must be strong".

Di Modica received the Ellis Island Medal of Honor in 1999. He was represented by art dealer Jacob Harmer who created the first official book on his life and art in Arturo Di Modica: The Last Modern Master, in 2020.

Di Modica was born on January 26, 1941, in Vittoria, Sicily to Angela and Giuseppe Di Modica shortly before Allied forces invaded during World War II. His father owned a grocery store and his mother was a homemaker. He was inspired by the ancient Greek and Roman artifacts of his childhood home. When his father did not want him to become an artist, he ran away at age 18, taking a steam train to Florence to pursue a career in sculpting.

Upon arrival in Florence, Di Modica took menial jobs to survive, he also studied at the Accademia di Belle Arti di Firenze. Unable to afford to use the local foundries he built his own forging and metalworking tools. He had his first major show at Villa Medici in 1968, primarily featuring rough abstract bronze castings.

By the late 1960s, Di Modica began working with marble in the Italian Carrara studios which is where he met English sculptor Henry Moore. Moore would subsequently nickname him "the young Michelangelo". Moore had a strong influence on Di Modica, who subsequently developed a new style. By 1970, Di Modica had grown frustrated with the limitations of Florence for his career and moved to New York City.

On arrival in New York in 1970, Di Modica set up his first studio on Grand Street in Soho. This was the time that the neighborhood was famous for its Bohemian arts. Here, he became known for leaving large scale marble works on the street outside his studio. It was also here that Di Modica discovered a young graffiti artist, Jean-Michel Basquiat (also known as SAMO), spray-painting his studio door. The two would later both move onto Crosby Street also in Soho in the early 1980s, as Basquiat experienced his rise to fame.

In 1977, Di Modica held a major exhibition at Battery Park, telephoning to invite art critic Hilton Kramer to the show. Uninterested, Kramer hung up on Di Modica — which inspired Di Modica to illegally drop off eight monumental abstract marble sculptures at Rockefeller Center, blocking 5th Avenue and drawing the attention of police. Ultimately, Mayor Abe Beame arrived, interested to meet the artist. After receiving a $25 fine, Di Modica received permission to temporarily leave the sculptures on exhibit. This stunt made the front page of the New York Post the next day and became a valuable learning experience for the artist. 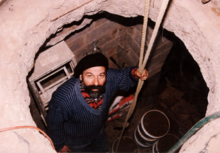 During the 1970s Di Modica focused on abstract sculpture, often balancing opposing materials into a single work. In the early 1980s he focused on the equine form, including a large stainless steel work exhibited in Trump Tower in 1984, marking a move away from abstract forms.

During this time, he also worked on a second large depiction of a horse biting its tail, almost 10.5 feet in height and titled Il Cavallo. The first version of Il Cavallo, constructed in bronze, completed mostly at his Crosby Street studio. Di Modica, on Valentine's Day, delivered the sculpture on a trailer behind his Ferrari to Lincoln Center, covered in a red sheet with the message "Be my Valentine NY Love AD".

Di Modica later sold a copy of the work to the Italian designer Roberto Cavalli.

On October 19, 1987, Black Monday hit U.S. financial markets and the country entered a very difficult period. Di Modica recounted that he felt indebted to the United States of America for welcoming him and enabling his success. Wanting to give something back, he conceived the Charging Bull sculpture. Di Modica spent the next two years creating the 16-foot bronze, reportedly financing the $350,000 cost himself. The sculpture was created in his Crosby Street studio and then cast using a local foundry. Once complete, Di Modica spent the next few nights watching the police patrols on Wall Street trying to find a window of opportunity. After establishing exactly where he wanted to place the bull, outside the New York Stock Exchange Building, he went home to rest. On December 15, Di Modica returned with a group of friends and Charging Bull on the back of a truck. However upon his arrival, during the day time a 40-foot Christmas tree had been installed exactly where he wanted to place the sculpture. With only four minutes between the police patrols, he announced "drop the bull under the tree – it's my gift."

Di Modica stayed by the bull to greet the morning commuters as they came to discover the sculpture. However, while he was away for lunch, the New York Stock Exchange arranged for the sculpture to be collected by a local firm. The late night event went on to make news all around the world, including the front page of the New York Post. Due to the public demand for the bull's return, Parks Commissioner Henry Stern arranged for the sculpture's installation at Bowling Green on December 20, where it can be found to this day.

Di Modica's original concept was to inspire each person who came into contact with the sculpture to carry on fighting with "strength and determination" through the hard times for the future. Di Modica later was quoted while in conversation with the art scribe Anthony Haden-Guest:

Responses and depiction in popular culture

Charging Bull became part of an image macro put out by Adbusters that publicized Occupy Wall Street, featuring a ballerina posed atop it with the text

"What Is Our One Demand: #OccupyWallStreet / September 17th. / Bring Tent."

Charging Bull has been featured in several films set in Manhattan, including The Big Short, The Wolf of Wall Street, Inside Man, the 2011 remake of Arthur in which Russell Brand and Luis Guzman respectively as Arthur and his butler crash into it with a Batmobile while dressed as Batman and Robin, and most famously in The Sorcerer's Apprentice, in which the sculpture comes alive and chases Nicolas Cage down Broadway.

In 2017, Charging Bull received media attention when a sculpture of a small female child called Fearless Girl appeared in front of it. Di Modica complained the sculpture changed the meaning of his work and threatened litigation, and at one point stated: "Now I'm going to turn around the bull myself."

In 2019, a man attacked Charging Bull with a steel banjo covered in nails, and a couple of months later the sculpture was attacked a second time by Extinction Rebellion protestors, who covered it in fake blood and staged a die-in on the surrounding traffic plaza.

Di Modica worked the majority of his career alone, from his SoHo studio without representation. By the 1990s, Di Modica's artwork had achieved global icon status, but he continued to work outside of the formal art market. By 2000 he had built up a roster of wealthy private collectors. He ate in Cipriani Downtown most days whilst in New York where he met new clients and entertained his existing ones.

Di Modica put the original 16-foot Charging Bull on the market in 2004 with an asking price of $5 million. Joe Lewis, the British billionaire and ex-owner of Christies, later purchased the sculpture on the condition that he never move it from Bowling Green. Lewis also purchased the rest of the 16-foot edition which he installed on his various golf courses. In 2012, Di Modica met the London-based art dealer, Jacob Harmer, and shortly afterwards entered into his first formal representation agreement with Harmer's dealership, Geist, based on Mount Street, Mayfair. From 2013, Harmer began documenting the life of the artist, commissioning new sculptures, buying back historical works and building a global market. Harmer confirmed that in 2014 they had tentatively agreed a deal for $12 million for a platinum bull in the UAE.

In October 2018, the first major work by Modica came to auction, a 6-foot polished bronze version of Charging Bull at Phillips London which was the first in an edition of eight and marked "1987–89". The sculpture sold for £309,000 ($405,000). In March 2019, a stainless steel version of Charging Bull came to auction at Sotheby's New York and despite being in poor condition, sold for $275,000. In Arturo Di Modica: The Last Modern Master, his representative confirms selling 4-foot sculptures for up to $496,000.

In 2004, at 63 years old, Di Modica was quoted saying: "I have a lot of art to create. I have another 15, 20 years to do something beautiful." This statement proved accurate when at 80 Di Modica died on February 19, 2021, in his birthplace of Vittoria, Sicily, having had cancer for a number of years. He had been in Vittoria for over a year, unable to return to New York because of his condition and because of the travel restrictions during the COVID-19 pandemic in Italy. Di Modica was aware he did not have much time left in the years prior to his death, as he worked desperately to complete two monumental bronze horses and a 12-acre sculpture school in Vittoria. Worried that time was running out to finish his projects, he was quoted by Jacob Harmer, his dealer: "I must finish this thing. I will die working." At the time of his death, he had completed his two 40-foot bronze horses and was planning an even larger version near his hometown.