The Assembly of the Republic of North Macedonia (Macedonian: Собрание на Република Северна Македонија, Albanian: Kuvendi i Republikës së Maqedonisë së Veriut), or the Sobranie (Macedonian: Собрание, "Assembly"), is the unicameral representative body of the citizens of North Macedonia; it is North Macedonia's sole legislature. According to the Constitution, the Sobranie represents the people and is vested with legislative power. It can have between 120 and 140 MPs (currently 120), elected by proportional representation from 6 electoral districts, each contributing 20 MPs, and there are also 3 reserved seats elected from the Macedonian diaspora which are awarded only if the voter turnout was sufficient. MPs are elected for a term of four years and cannot be recalled during their term. The Sobranie is presided over by a President. Its organization and functioning are regulated by the Constitution and Rules of Procedure. The Assembly's seat is in the nation's capital, Skopje.

The preliminary apportionment in the 2020 North Macedonian parliamentary election:

Presidents of the Assembly (1991–present)

Main article: List of presidents of the Assembly of the Republic of North Macedonia 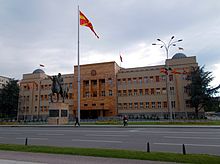 Retrieved from "https://en.wikipedia.org/w/index.php?title=Assembly_of_North_Macedonia&oldid=1009572282"
Uses material from the Wikipedia article Assembly of North Macedonia, released under the CC BY-SA 3.0 license.