The Associated Press NFL Defensive Player of the Year Award (DPOY) is given by the Associated Press (AP) to the most outstanding defensive player in the National Football League (NFL) at the end of every season. It has been awarded since 1971. The winner is decided by votes from a panel of 50 AP sportswriters who regularly cover the NFL. Since 2011, the award has been presented at the annual NFL Honors ceremony the day before the Super Bowl, along with other AP awards, such as the AP NFL Offensive Player of the Year Award, AP NFL Most Valuable Player Award, and AP NFL Rookie of the Year Award.

As of the end of the 2019 NFL season, linebackers have won the award 16 times, more than any other position. A defensive end has won thirteen times, followed by nine defensive tackles, six cornerbacks, and five safeties. Only two winners of the AP Defensive Player of the Year Award have also won the AP's Most Valuable Player Award for the same season: defensive tackle Alan Page in 1971 for the Minnesota Vikings and linebacker Lawrence Taylor in 1986 for the New York Giants. Stephon Gilmore is the incumbent holder of the award, winning it for the 2019 NFL season. 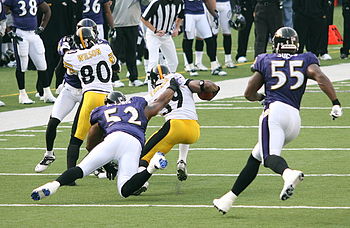 Ray Lewis (No. 52) and Terrell Suggs (No. 55) each won the award playing for the Baltimore Ravens. 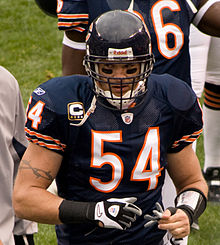 Brian Urlacher won the award in 2005 with the Chicago Bears.