The Banco Convention of 1905, between the United States and Mexico, was negotiated and signed in 1905 and ratified by both nations in 1907. It resulted in 247 exchanges of bancos (land surrounded by bends in the river that became segregated by a cutoff, often due to rapid erosion of the river channel) between the two nations over the period from 1910 to 1976. Most of these were in the Lower Rio Grande Valley, the Presidio Valley and the El Paso-Juarez Valley. In 1927 the convention was applied to the short international border on the Colorado River. 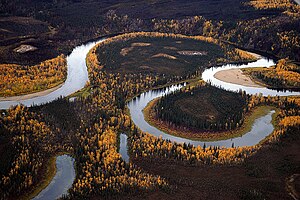 An example of a banco, created when a meander is cut off by a new, shorter channel, leaving a cut-off section of land surrounded by a U-shaped oxbow lake.

Aerial photo of Ringgold Banco, opposite Rio Grande City, Texas; exchanged from the United States to Mexico on September 26, 1949.

In 1884, a further treaty set out to clarify the 1848 Treaty of Guadalupe Hidalgo. The Convention of November 12, 1884 established the rules for determining the location of the US-Mexico boundary when the meandering rivers of the international border transferred tracts of land from one bank of the river to the other. The treaty stated that if the river changed course gradually through a process of soil erosion, then the boundary should follow the new course of the river. However, a sudden change of course, for example one caused by a flood, would not affect the boundary. Nevertheless, the clarifications established in the treaty of 1884 did not resolve the question of land ownership.

Because the course of the Rio Grande was not static, to maintain the location of the river as the international boundary presented diplomatic and practical challenges. The river changed course frequently where it flowed through areas of relatively loose alluvial soil, doubling back on itself as it wound its way through the Lower Rio Grande Valley. Especially in times of flooding, tracts of land called "bancos" were created by avulsive changes that cut off entire oxbow-shaped meanders.

The result of these cut-offs was often confusion regarding sovereignty, land ownership, and law enforcement. The purpose of the 1905 convention was to eliminate these bancos from the effects of Article II of the US-Mexico Convention of 1884, to which they otherwise would have been subject, and to establish a more definitive means to settle matters. Any bancos larger than 250 hectares (620 acres) or with a population over 200 were excluded from the 1905 convention.

The International Boundary and Water Commission was charged with implementing the convention. Under the treaty, the following transfers involving Texas occurred from 1910–1976:

In 1927 under this convention, the U.S. acquired two bancos from Mexico at the Colorado River border with Arizona. Farmers Banco, covering 583.4 acres (2.361 km2), a part of the Cocopah Indian Reservation, was ceded to the U.S. with controversy. Fain Banco, of 259 acres (105 ha), also became U.S. soil.

Below is a list of the 247 bancos that were exchanged under the terms of the 1905 convention. This information is also available as a kmz file at this location.

Note: For all 247 bancos, aerial images, including orthographic images, provide visible evidence of each location at the stated coordinates. The latitude and longitude coordinates are within the perimeter of each banco and were exactly located, as shown on the maps that were published with the corresponding minutes of the International Boundary and Water Commission, which officially transferred jurisdiction over each banco.

Retrieved from "https://en.wikipedia.org/w/index.php?title=Banco_Convention_of_1905&oldid=977947729"
Uses material from the Wikipedia article Banco Convention of 1905, released under the CC BY-SA 3.0 license.