Banffshire (/ˈbænfʃər/; Scots: Coontie o Banffshire; Scottish Gaelic: Siorrachd Bhanbh) is a historic county, registration county and lieutenancy area of Scotland. The county town is Banff, although the largest community is Buckie to the west. It borders the Moray Firth to the north, Morayshire and Inverness-shire to the west, and Aberdeenshire to the east and south.

Between 1890 and 1975 the County of Banff, also known as Banffshire, had its own county council. In 1975 Banffshire was abolished for the purpose of local government and its territory divided between the local government districts of Moray and Banff and Buchan, which lay within the Grampian region. In 1996, the Grampian region was abolished, and the area now lies within the council areas of Moray and Aberdeenshire (note that both these polities have different boundaries to the historic counties of the same names). 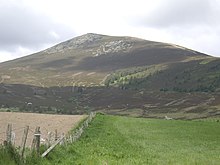 Banffshire consists of a 30-mile segment of coast along the Moray Firth from Spey Bay to Cullaykhan Bay, the immediate hinterland, plus a long, tapering 'tail' stretching inland some 55 or so miles, thus giving the county a rather odd, elongated shape. The coastal section is fairly flat, with a large numbers of bays and headlands (the most notable of these being - from west to east - Craig Head, Long Head, Cullen Bay, Logan Head, Crathie Point, Sandend Bay, Links Bay, Strathmarchin Bay, Cowhythe Bay, Boyne Bay, Whyntie Head, Knock Head, Boyndie Bay, Banff Bay, Head of Garness, More Head, Gamrie Bay, Troup Head, Downie Bay and Cullykhan Bay. Some small islands lies of the coast, such as West Muck, East Muck, Craigenroan and the Collie Rocks. The interior is generally hilly, rising to the Cairngorms in the far south, where the highest peak in the county and second highest in Scotland (Ben Macdhui) can be found on the border with Aberdeenshire. The county's largest lochs are also located in the far south, such as Loch Avon, Dubh Lochan, Lochan a' Bhainne, Lochan nan Gabhar and Loch Builg. The main rivers are the Deveron, Spey, Isla, Aven, Fiddich, Ailnach and Livet.

Considerable evidence of prehistoric human habitation exists particularly near the coastal area. For example, the Longman Hill cairn and Cairn Lee are situated in the northern portion of Banffshire in the vicinity of the Burn of Myrehouse.

Located in the area are the ruins of several medieval castles and the 12th century kirk of Gamrie.

The region remained largely Roman Catholic after the Reformation (16th century) and suffered greatly in the ensuing struggles.

During the Wars of the Three Kingdoms (17th century), Banffshire was a Royalist stronghold.

Until 1891 the county contained various exclaves which were locally situated in Aberdeenshire, the biggest being the parish and village of St. Fergus. 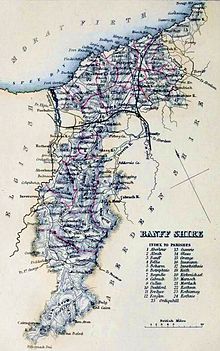 Civil parishes are still used for some statistical purposes, and separate census figures are published for them. As their areas have been largely unchanged since the 19th century this allows for comparison of population figures over an extended period of time. 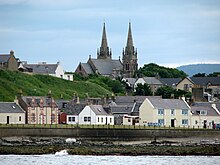 The Aberdeen–Inverness railway line runs through the town of Keith in the north of the county.

Principal mansions in Banffshire c. 1854 The Imperial Gazetteer of Scotland (1854) Vol. I. by the Rev. John Marius Wilson lists the following :

Most common surnames in Banffshire at the time of the United Kingdom Census of 1881:

Uses material from the Wikipedia article "Banffshire", released under the CC BY-SA 3.0 license.