Bartolomeu Dias (/ˈdiːəs/; Portuguese: [baɾtuluˈmew ˈdi.ɐʃ]; Anglicized: Bartholomew Diaz; c. 1450 – 29 May 1500), a nobleman of the Portuguese royal household, was a Portuguese explorer. He sailed around the southernmost tip of Africa in 1488, the first European to do so, setting up the route from Europe to Asia later on. Dias is the first European during the Age of Discovery to anchor at what is present-day South Africa.

Historical setting and purposes of the Dias expedition

Bartolomeu Dias was a squire of the royal court, superintendent of the royal warehouses, and sailing-master of the man-of-war São Cristóvão (Saint Christopher). Very little is known of his early life. King John II of Portugal appointed him, on 10 October 1486, to head an expedition to sail around the southern tip of Africa in the hope of finding a trade route to India. Dias was also charged with searching for the lands ruled by Prester John, erroneously believed to be a powerful Christian ruler of territory somewhere beyond Europe. Dias left 10 months later in August 1487. In the previous decades Portuguese mariners, most famously Prince Henry the Navigator (whose contribution was more as a patron and sponsor of voyages of discovery than as a sailor), had explored the areas of the Atlantic Ocean off Southern Europe and Western Africa as far as the Cape Verde Islands and modern-day Sierra Leone, and had gained sufficient knowledge of oceanic shipping and wind patterns to enable subsequent voyages of greater distance. In the early 1480s Diogo Cão in two voyages (he died towards the end of the second) had explored the mouth of the Congo River and sailed south of the Equator to present-day Angola and Namibia.

São Cristóvão was piloted by Pêro de Alenquer. A second caravel, the São Pantaleão, was commanded by João Infante and piloted by Álvaro Martins. Dias's brother Pêro Dias was the captain of the square-rigged support ship with João de Santiago as pilot. 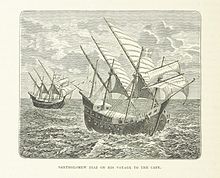 An illustration of the São Cristóvão and São Pantaleão

The expedition sailed down the west coast of Africa; provisions were picked up on the way at the Portuguese fortress of São Jorge de Mina on the Gold Coast. After sailing south of modern-day Angola, Dias reached the Golfo da Conceicão (Walvis Bay, in modern Namibia) by December. Continuing south, he discovered Angra dos Ilheus, then was hit by a violent storm. Thirteen days later, from the open ocean, he searched the coast again to the east, discovering and using the westerlies winds—the ocean gyre, but finding just ocean. Having rounded the Cape of Good Hope at a considerable distance to the west and southwest, he turned east, and taking advantage of the winds of Antarctica that blow strongly in the South Atlantic, sailed northeast. After 30 days without seeing land, he entered what he named Aguada de São Brás (Bay of Saint Blaise)—later renamed Mossel Bay—on 4 February 1488. Dias's expedition reached its furthest point on 12 March 1488 when it anchored at Kwaaihoek, near the mouth of the Boesmans River, where a padrão—the Padrão de São Gregório—was erected before turning back. Dias wanted to continue to India, but he was forced to turn back when his crew refused to go further and the rest of the officers unanimously favoured returning to Portugal. It was only on the return voyage that he actually discovered the Cape of Good Hope, in May 1488. Dias returned to Lisbon in December of that year, after an absence of 16 months and 17 days.

The discovery of the passage around southern Africa was significant because, for the first time, Europeans could trade directly with India and the Far East, bypassing the overland Euro-Asian route with its expensive European, Middle Eastern and Central Asian middlemen. The official report of the expedition has been lost.

After these early attempts, the Portuguese took a decade-long break from Indian Ocean exploration. During that hiatus, it is likely that they received valuable information from a secret agent, Pêro da Covilhã, who had been sent overland to India and returned with reports useful to their navigators.

Using his experience with explorative travel, Dias helped in the construction of the São Gabriel and its sister ship the São Rafael that were used in 1498 by Vasco da Gama to sail past the Cape of Good Hope and continue to India. Dias only participated in the first leg of Da Gama's voyage, until the Cape Verde Islands. Two years later he was one of the captains of the second Indian expedition, headed by Pedro Álvares Cabral. This flotilla first reached the coast of Brazil, landing there in 1500, and then continued east to India. Dias perished near the Cape of Good Hope that he presciently had named Cape of Storms. Four ships, including Dias's, encountered a huge storm off the cape and were lost on 29 May 1500. A shipwreck found in 2008 by the Namdeb Diamond Corporation off Namibia was at first thought to be Dias's ship, but recovered coins come from a later time.

Dias was married and had two sons