William Mark Fagerbakke (/ˈfeɪɡərbɑːki/; born October 4, 1957) is an American actor. He voices Patrick Star in the animated series SpongeBob SquarePants and played Michael "Dauber" Dybinski on the sitcom Coach. He also appeared in 12 episodes of the sitcom How I Met Your Mother as Marshall Eriksen's father Marvin.

Fagerbakke was born on October 4, 1957, in Fontana, California, and moved to Rupert, Idaho, as a youth. He graduated from Minico High School in Rupert in 1975, where he was a three-sport athlete for the Spartans in football, basketball, and track.

Although he had multiple scholarship offers for college football, including Pac-8 schools, he decided to stay in state and attended the University of Idaho in Moscow. He was a defensive lineman for the Vandals and was ticketed to redshirt in 1976, but was called into action in the fourth game of his sophomore season. The Vandals went 7–4 in 1976, their first winning season in five years, and were 5–2 in the seven games that Fagerbakke started. Head coach Ed Troxel planned on moving him to the offensive line in 1977, but a knee injury in spring drills ended Fagerbakke's athletic career, which turned his focus to theater. (The Vandals went 3–8 in 1977 and Troxel was fired; then 2–9 in 1978 under Jerry Davitch, one of the wins being a "no-show" forfeit.)

Fagerbakke's first theatrical role was in a campus production of Godspell. He was a member of the Delta Tau Delta fraternity and earned his bachelor's degree in 1981, a result of "two years of football and four years of school." He later attended graduate school at Southern Methodist University in Dallas, Texas.

Fagerbakke has appeared on television in roles such as assistant coach "Dauber" Dybinski on Coach, and in movies, including Funny Farm. He had a role as the mentally disabled Tom Cullen in the 1994 mini-series Stephen King's The Stand. In 1999, he had a role in HBO's original series Oz as Officer Karl Metzger. Since 1999, he has provided the voice of Patrick Star for the Nicktoon SpongeBob SquarePants. His character on Coach was based on a former assistant coach at Idaho, a graduate assistant nicknamed "Tuna." 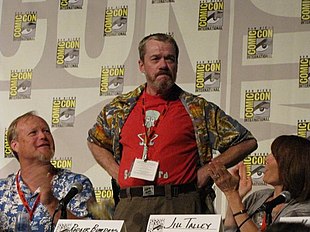 Fagerbakke, Talley, and Bumpass at the 2009 San Diego Comic-Con