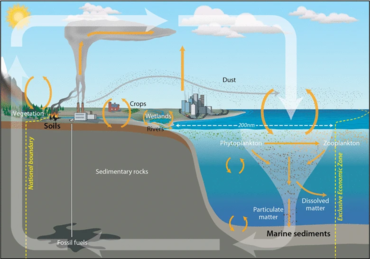 The implications of shifts in the global carbon cycle due to human activity are concerning scientists.

In ecology and Earth science, a biogeochemical cycle or substance turnover or cycling of substances is a pathway by which a chemical substance moves through biotic (biosphere) and abiotic (lithosphere, atmosphere, and hydrosphere) compartments of Earth. There are biogeochemical cycles for the chemical elements calcium, carbon, hydrogen, mercury, nitrogen, oxygen, phosphorus, selenium, iron and sulfur; molecular cycles for water and silica; macroscopic cycles such as the rock cycle; as well as human-induced cycles for synthetic compounds such as polychlorinated biphenyl (PCB). In some cycles there are reservoirs where a substance remains for a long period of time.

Ecological systems (ecosystems) have many biogeochemical cycles operating as a part of the system, for example, the water cycle, the carbon cycle, the nitrogen cycle, etc. All chemical elements occurring in organisms are part of biogeochemical cycles. In addition to being a part of living organisms, these chemical elements also cycle through abiotic factors of ecosystems such as water (hydrosphere), land (lithosphere), and/or the air (atmosphere).

The living factors of the planet can be referred to collectively as the biosphere. All the nutrients—such as carbon, nitrogen, oxygen, phosphorus, and sulfur—used in ecosystems by living organisms are a part of a closed system; therefore, these chemicals are recycled instead of being lost and replenished constantly such as in an open system.

The flow of energy in an ecosystem is an open system; the sun constantly gives the planet energy in the form of light while it is eventually used and lost in the form of heat throughout the trophic levels of a food web. Carbon is used to make carbohydrates, fats, and proteins, the major sources of food energy. These compounds are oxidized to release carbon dioxide, which can be captured by plants to make organic compounds. The chemical reaction is powered by the light energy of the sun.

Sunlight is required to combine carbon with hydrogen and oxygen into an energy source, but ecosystems in the deep sea, where no sunlight can penetrate, obtain energy from sulfur. Hydrogen sulfide near hydrothermal vents can be utilized by organisms such as the giant tube worm. In the sulfur cycle, sulfur can be forever recycled as a source of energy. Energy can be released through the oxidation and reduction of sulfur compounds (e.g., oxidizing elemental sulfur to sulfite and then to sulfate).

Although the Earth constantly receives energy from the sun, its chemical composition is essentially fixed, as the additional matter is only occasionally added by meteorites. Because this chemical composition is not replenished like energy, all processes that depend on these chemicals must be recycled. These cycles include both the living biosphere and the nonliving lithosphere, atmosphere, and hydrosphere.

Plants and animals utilize carbon to produce carbohydrates, fats, and proteins, which can then be used to build their internal structures or to obtain energy. Plants and animals temporarily use carbon in their systems and then release it back into the air or surrounding medium. Generally, reservoirs are abiotic factors whereas exchange pools are biotic factors. Carbon is held for a relatively short time in plants and animals in comparison to coal deposits. The amount of time that a chemical is held in one place is called its residence time.

The most well-known and important biogeochemical cycles are shown below:

Biogeochemical cycles always involve hot equilibrium states: a balance in the cycling of the element between compartments. However, overall balance may involve compartments distributed on a global scale.

As biogeochemical cycles describe the movements of substances on the entire globe, the study of these is inherently multidisciplinary. The carbon cycle may be related to research in ecology and atmospheric sciences. Biochemical dynamics would also be related to the fields of geology and pedology.