The Mexican Border War, or the Border Campaign, refers to the military engagements which took place in the Mexico–United States border region of North America during the Mexican Revolution. It was the fifth and final major conflict fought on American soil, where its predecessors were the American Revolutionary War, War of 1812, Mexican–American War and the American Civil War. The end of the Mexican Revolution on December 1, 1920, marked the close of the American Frontier. The Bandit War in Texas was part of the Border War. From the beginning of the Mexican Revolution in 1910, the United States Army was stationed in force along the border and on several occasions fought with Mexican rebels or federals. The height of the conflict came in 1916 when revolutionary Pancho Villa attacked the American border town of Columbus, New Mexico. In response, the United States Army, under the direction of General John J. Pershing, launched an expedition into northern Mexico, to find and capture Villa. Although Villa was not captured, the US Army found and engaged the Villista rebels, and in killing Villa's two top lieutenants. The revolutionary himself escaped and the American army returned to the United States in January 1917. Conflict at the border continued, however, and the United States launched several additional, though smaller operations into Mexican territory until after the American victory in the Battle of Ambos Nogales, leading to the establishment of a permanent border wall. Conflict was not only subject to Villistas and Americans; Maderistas, Carrancistas, Constitutionalistas and Germans also engaged in battle with American forces during this period.

Francisco Madero with his men in 1910

American Magonistas after the First Battle of Tijuana in 1911

General John J. Pershing, Pancho Villa and others at Fort Bliss, Texas, in 1913 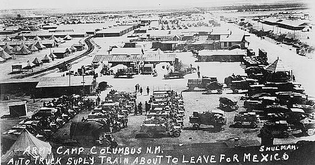 American infantry in a skirmish line near Deming, New Mexico, in 1916 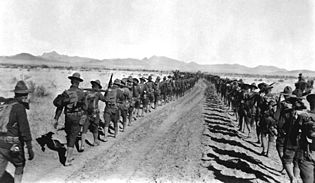 United States Army troops returning to the U.S. in January 1917 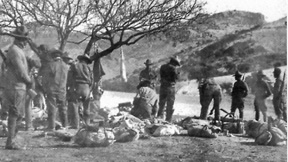 Yaqui prisoners and 10th Cavalry troops on 9 January 1918, after the skirmish in Bear Valley, Arizona