Brewster County is a county located in the western part of the U.S. state of Texas. As of the 2010 census, the population was 9,232. Its county seat and only city is Alpine. The county is named for Colonel Henry Percy Brewster, a Secretary of War for the Republic of Texas. Brewster County is the largest county by area in the state - at 6,192 square miles (16,040 km2) it is over three times the size of the state of Delaware, and more than 500 square miles (1,300 km2) bigger than Connecticut. It is one of the nine counties that comprise the Trans-Pecos region of West Texas, and borders Mexico.

Paleo-Indian hunter-gatherers existed there at least 9000 years ago. Mescalaro Apaches emerged later and conducted raids that discouraged settlers. Between 1779 and 1787, Col. Juan de Ugalde drove the Mescalaros back across the Rio Grande and into the Chisos Mountains. The three leading Mescalero chiefs, Patula Grande, Quemado, and Zapato Tuerto, agreed in March 1789 to submit to Spanish rule. Comanche raiding parties continued through much of the 19th century. 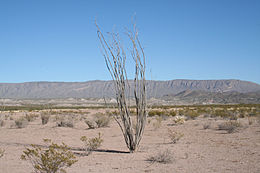 Spanish explorers Álvar Núñez Cabeza de Vaca in 1535 and Antonio de Espejo in 1583 crossed Brewster County on their way to La Junta de los Ríos, the junction of the Rio Grande and the Rio Conchos.

In 1684, Juan Domínguez de Mendoza camped at Kokernot Spring and wrote the earliest recorded description of it. 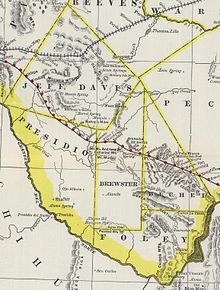 Map of Presidio County, Texas and the counties of Brewster, Buchel, Foley, and Jeff Davis created from Presidio in 1887: Buchel and Foley were abolished and joined to Brewster in 1897.

Brewster County was marked off in 1887 from Presidio County and named for Henry Percy Brewster. Murphyville, later renamed Alpine, was selected as county seat.

In response to threats of ongoing Indian attacks, Camp Peña Colorado was established in 1879 a few miles south of the future site of Marathon.

Word of mouth about the open rangeland in the area was spread by freighters John W Burgess and August Santleben, leading the way for settlers.

The Galveston, Harrisburg and San Antonio Railway built through the area in 1882, opening up opportunity for entrepreneurs who came on railroad-related business and stayed.

Alfred S. Gage moved to the area in 1882 to help his brother's ranching operation, founding the A. S. Gage Ranch, one of the largest ranching operations in Texas, in 1883. In 1927, he built the Gage Hotel in Marathon.

Legendary lawman and later Texas Rangers Hall of Fame member James B. Gillett served as sheriff of Brewster County, and operated a ranch in Alpine in the late 19th and early 20th centuries. He later retired to his Barrel Spring Ranch in Jeff Davis County.

Joseph Daniel Jackson came to the area in 1882 as part of Company B of the Texas Rangers assigned to protect the railroad. By 1882, he had settled near Alpine and taken up ranching, branching out later to merchant and civic leader. Jackson is known locally as the father of Sul Ross University due to his efforts that helped lead to the establishment of the school. Sul Ross University, named for Texas Governor Lawrence Sullivan Ross, was created by an act of the 35th Legislature in 1917 as a state normal college to train teachers.

From the turn of the 20th century through World War II, the Terlingua Mining District was a boom town due to the extraction of cinnabar, a mercury ore, in the Chisos Mountains. Silver and lead from mines on the Mexican side of the river in the Boquillas area were shipped north, as were candelilla wax produced at factories at Glenn Spring and Mariscal and the guayule rubber from a factory in Marathon.

Brewster County became targeted by incursions of bandits from Mexico, due at least in part to Pancho Villa. In June 1915, Governor James E. Ferguson asked President Woodrow Wilson to station troops in the Big Bend. The request was denied by Maj. Gen. Frederick Funston, who believed such security was a state issue. Although a number of events took place to effect policy change, the tipping point was the May 5, 1916 raid at Glenn Spring. Only nine soldiers had been stationed in the area for protection against the bandits. Estimates vary as to the number of Mexican raiders who attacked the soldiers, from 60 to several hundred. The raid caused a larger military presence in the area. President Wilson mobilized the National Guard to reinforce the Army, and by the end of 1916, an estimated 116,957 guardsmen were stationed along the border from California to Texas. As the mines and wax factories played out after World War I, raiders from across the border abated.

During the 1918 influenza epidemic, an African American nurse, Viola Pettus, living in the border area of Brewster County became legendary for her courageous and selfless treatment of anyone with the disease – including raiders and refugees from Mexico, and local members of the Ku Klux Klan.

The geographic region known as the Big Bend is a loosely defined section of the Trans-Pecos, although generally agreed to comprise its more southern portions. Characterized by an extremely rugged, arid Chihuahuan Desert landscape, the region takes its name from the sharp northeastward turn made by the Rio Grande nearby. Often noted for its stark beauty, the Big Bend was described by the historian Walter Prescott Webb as "the finest example of earth-wreckage in Texas". It was for this reason that a national park was to be established in the region.

Big Bend National Park was established as a state park in 1933 by the state legislature, and expanded the same year by Governor Miriam A. Ferguson. In 1935, the United States Congress passed legislation founding it as a national park. Big Bend opened to the public in 1944. At just over 800,000 acres, it is the fourteenth largest national park in the United States and is larger than the state of Rhode Island.

Terlingua produced 40% of the nation's quicksilver in 1920, but declining population has since qualified it as a ghost town. In 1962, The Dallas Morning News columnist Francis X. Tolbert published his ode to chili Bowl of Red and founded the Chili Appreciation Society. Fellow columnist Wick Fowler joined in the fun and became a charter member. The World Championship Chili Cookoff at Terlingua began as a tongue-in-cheek challenge between Wick Fowler and humorist H. Allen Smith in 1967 and has become a November tradition, celebrated across the state and nation. The first Saturday in November, Terlingua now hosts two competing international chili championships: the Terlingua International Chili Championship, and the Original Terlingua International Chili Cookoff.

The Roadian Age of the Permian Period of geological time is named for rock strata in Road Canyon in the north of Brewster County.

The Wordian Age of the Permian Period is probably named for the Word Ranch in the Glass Mountains of Brewster County. 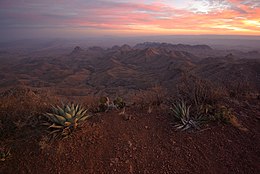 U.S. Highway 90 crosses the county in the north; U.S. Highway 385 enters Brewster County from the northeast and proceeds south to the county's main attraction, Big Bend National Park, part of the Big Bend. The Sunset Route of the Union Pacific Railroad crosses northern parts of the county, and a recently revived portion of the Kansas City, Mexico and Orient Railway traverses the county en route to Presidio.

About 39.4% of Brewster County is classified as having a hot arid desert climate (Köppen BWh). The remainder has a semiarid steppe climate with 32.1% experiencing a cold steppe climate (Köppen BSk), while 28.5% is assigned as a hot steppe climate (Köppen BSh). Temperatures are coolest and rainfall most abundant in the county's northern highlands and in the upper elevations of the Chisos Mountains in the south. In the southern lowlands along the Rio Grande, snowfall is uncommon, rainfall much reduced, and summer high temperatures can be extreme. Throughout the county, precipitation falls mostly from May through October with the remainder of the year predominantly dry.

In addition, Sul Ross State University is located in Alpine.

Despite its substantial Hispanic population, Brewster County is Republican leaning in presidential elections, though not as strongly Republican as other rural counties in the Trans-Pecos region or West Texas. No candidate has won the county with double digit margins since George W. Bush in 2000, and the last non-Republican candidate (as of 2016) to win the county was Barack Obama in 2008