Brian Keith Shaw (born March 22, 1966) is an American professional basketball coach and former player who is the head coach of the NBA G League Ignite of the NBA G League. He could play both guard positions, but was used primarily at point guard over the course of his 14 seasons in the league.

Shaw grew up in Oakland, California with other future basketball stars such as Antonio Davis, Jason Kidd, and Gary Payton, as well as Demetrius "Hook" Mitchell. In his youth, he was a participant at the East Oakland Youth Development Center, a local community organization where he played basketball. He attended Westlake Middle School and then Bishop O'Dowd High School in Oakland. For college, he attended St. Mary's College of California for his freshman and sophomore years of college, then transferred to UC Santa Barbara for his junior and senior seasons. In his senior year, he was named Pacific Coast Athletic Association (PCAA) player of the year as he led the Gauchos to their first ever NCAA tournament berth.

He was taken with the 24th overall pick by the Boston Celtics in the 1988 NBA draft. In 1988, Shaw signed a one-year contract with the Celtics. In 1989, Shaw signed a two-year contract to play with an Italian team, Il Messaggero Roma. At the end of January 1990, Shaw signed a 5-year deal with the Celtics. In June of that year, Shaw told the Celtics he planned to play for Il Messaggero during the 1989–90 season. The ensuing contract dispute, Boston Celtics v. Brian Shaw, which Shaw lost, became a relatively famous sports law case and is read in many law school contracts classes.

During his NBA career, he played for the Celtics, Miami Heat, Orlando Magic, Golden State Warriors, Philadelphia 76ers, Portland Trail Blazers, and Los Angeles Lakers. He was a member of four squads that made NBA Finals appearances: in 1995 with the Magic and in 2000, 2001, and 2002 with Lakers (winning three NBA championships with the Lakers).

He also played for the US national team in the 1986 FIBA World Championship, winning the gold medal. In the final between the US and Soviet Union, Shaw hit a key three-pointer in the closing seconds. The American team won the game by two points.

Shaw joined the Los Angeles Lakers in 1999, re-uniting with former Orlando teammate Shaquille O'Neal. He served as a backup to All-Star shooting guard Kobe Bryant throughout the season and playoffs as the Lakers had the league's best record winning 67 games. Shaw played in all 22 of the Lakers' playoff games as they advanced past the Sacramento Kings and the Phoenix Suns before facing the Portland Trail Blazers in the Western Conference Finals. The Lakers took a 3–1 lead in the series before the Trail Blazers won games 5 and 6 to tie the series at three games apiece. In game 7, the Trail Blazers lead 75-60 in the fourth quarter. The Blazers shot 5 for 23 in the final quarter as the Lakers made a comeback bolstered by two clutch three-point baskets by Shaw. The Lakers won the game and made the NBA Finals to face the Indiana Pacers. Shaw started in game 3 in place of the injured Bryant, and then played critical minutes in the Lakers overtime win in game 4. The Lakers won the series 4–2, and Shaw won his first NBA championship.

Shaw continued to back up Bryant in the 2000–01 season, but started a total of 28 games. He once again played a key role for the Lakers as they steamrolled through the playoffs and defeated the Philadelphia 76ers 4–1 in the 2001 NBA Finals. The Lakers won a third title in the 2001–02 season before losing in the Western Conference Semifinals to the San Antonio Spurs in the 2002–03 season, and Shaw then retired following the season.

While a member of the Heat, on April 8, 1993, Shaw hit a then-NBA record ten three-point field goals (out of 15 attempts) against the Milwaukee Bucks at the Bradley Center, finishing with 32 points. Starting in 1994, he was one-half of the popular "Shaw-Shaq Redemption" (named after The Shawshank Redemption), an alley-oop from Shaw to Shaquille O'Neal that was popular with fans in both Orlando and Los Angeles (Shaw and O'Neal were also Laker teammates). In an interview with The Miami Herald in 2007, O'Neal claimed that the teammate he had most respected in his career was Shaw.

On NBA All-Star Weekend in 2000, held in Oakland, Shaw received a key to the City of Oakland along with his fellow Oakland natives Jason Kidd and Gary Payton. 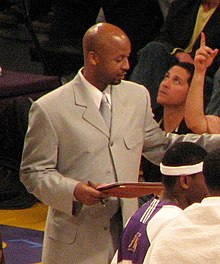 Shaw left the Lakers to join the Indiana Pacers as an assistant coach. He was later promoted to associate head coach. Shaw was a highly respected assistant coach by other NBA coaches as well as the media.

After spending two years on the Pacers' bench, on June 25, 2013, Shaw was announced as the head coach of the Denver Nuggets, replacing former coach George Karl. On March 3, 2015, he was fired by the Nuggets after compiling a record of 56–85 (.397) in just under two seasons.

On June 26, 1993, both of Shaw's parents and his sister were killed in a car accident in Nevada. His sister's daughter survived the crash and Shaw, with help from his aunt, helped raise her. Shaw's wife, Nikki, is a professional chef. They married in 1998 and have three children.