A cameo role or cameo appearance (/ˈkæmioʊ/; often shortened to just cameo) is a brief appearance or voice part of a well-known person in a work of the performing arts. These roles are generally small, many of them non-speaking ones, and are commonly either appearances in a work in which they hold some special significance (such as actors from an original movie appearing in its remake) or renowned people making uncredited appearances. Short appearances by celebrities, film directors, politicians, athletes or musicians are common. A crew member of the movie or show playing a minor role can be referred to as a cameo as well, such as Alfred Hitchcock's frequently performed cameos.

Originally, in the 1920s, "cameo role" meant "a small character part that stands out from the other minor parts". The Oxford English Dictionary connects this with the meaning "a short literary sketch or portrait", which is based on the literal meaning of "cameo", a miniature carving on a gemstone. More recently (late 20th century), "cameo" has come to refer to any short appearances, as a character, such as the examples below.

Cameos are generally not credited because of their brevity, or a perceived mismatch between the celebrity's stature and the film or television series in which they are appearing. Many are publicity stunts. Others are acknowledgements of an actor's contribution to an earlier work, as in the case of many film adaptations of television series, or of remakes of earlier films. Others honour artists or celebrities known for work in a particular field.

One of the best-known series of cameos was by Stan Lee, who made very brief appearances in most of Marvel movies.

Cameos also occur in novels and other literary works. "Literary cameos" usually involve an established character from another work who makes a brief appearance to establish a shared universe setting, to make a point, or to offer homage. Balzac often employed this practice, as in his Comédie humaine. Sometimes a cameo features a historical person who "drops in" on fictional characters in a historical novel, as when Benjamin Franklin shares a beer with Phillipe Charboneau in The Bastard by John Jakes.

A cameo appearance can be made by the author of a work to put a sort of personal "signature" on a story. Vladimir Nabokov often put himself in his novels, for instance as the very minor character Vivian Darkbloom (an anagram of his name) in Lolita.

Further information: List of directors who appear in their own films

Alfred Hitchcock is known for his frequently performed cameos in his movies, as early as in his third film The Lodger (1927). In Lifeboat, as the action was restricted to the titular lifeboat, Hitchcock appeared in a newspaper ad.

Quentin Tarantino provides cameos or small roles in at least 10 of his movies.

Likewise, Peter Jackson has made brief cameos in all of his movies, except for his first feature-length film Bad Taste in which he plays a main character, as well as The Battle of the Five Armies, though a portrait of him appears in the film. For example, he plays a peasant eating a carrot in The Fellowship of the Ring and The Desolation of Smaug; a Rohan warrior in The Two Towers and a Corsair of Umbar boatswain in The Return of the King. All four were non-speaking "blink and you miss him" appearances, although in the Extended Release of The Return of the King, his character was given more screen time and his reprise of the carrot eating peasant in The Desolation of Smaug was featured in the foreground in reference to The Fellowship of the Ring - last seen twelve years earlier.

Director Martin Scorsese appears in the background of his films as a bystander or an unseen character. In Who's That Knocking at My Door (1967), he appears as one of the gangsters; he is a lighting crewman in After Hours (1985) and a passenger in Taxi Driver (1976). He opens up his film The Color of Money (1986) with a monologue on the art of playing pool. In addition, he appears with his wife and daughter as wealthy New Yorkers in Gangs of New York, and he appears as a theatre-goer and is heard as a movie projectionist in The Aviator (2004).

In a same way, Roman Polanski appears as a hired hoodlum in his film Chinatown (1974), slitting Jack Nicholson's nose with the blade of his clasp knife.

Directors sometimes cast well-known lead actors with whom they have worked in the past in other films. Mike Todd's film Around the World in 80 Days (1956) was filled with cameo roles: John Gielgud as an English butler, Frank Sinatra playing piano in a saloon, and others. The stars in cameo roles were pictured in oval insets in posters for the film, and gave the term wide circulation outside the theatrical profession.

It's a Mad, Mad, Mad, Mad World (1963), an "epic comedy", also features cameos from nearly every popular American comedian alive at the time, including The Three Stooges, Jerry Lewis, a silent appearance by Buster Keaton and a voice-only cameo by Selma Diamond.

Aaron Sorkin also had cameos in some works he wrote: as a bar customer speaking about the law in his debut film screenplay A Few Good Men (1992), as an advertising executive in The Social Network and as a guest at the inauguration of President Matt Santos in the final episode of The West Wing.

Franco Nero, the actor who portrayed the Django character in the original 1966 film, appears in a bar scene of the Tarantino film Django Unchained. There, he asks Django (Jamie Foxx) to spell his name, which led to the famous promotional tagline for the film - "The 'D' is silent". Franco's character responds simply, "I know."

Many cameos featured in Maverick (1994), directed by Richard Donner. Among them, Danny Glover – Mel Gibson's co-star in the Lethal Weapon franchise also directed by Donner – appears as the lead bank robber. He and Maverick (Gibson) share a scene where they look as if they knew each other, but then shake it off. As Glover makes his escape with the money, he mutters "I'm too old for this shit", his character's catchphrase in the Lethal Weapon films. In addition, a strain of the main theme from Lethal Weapon plays in the score when Glover is revealed. Actress Margot Kidder made a cameo appearance in the same film as a robbed villager: she had previously starred as Lois Lane in Donner's Superman (1978).

Ben Stiller, Vince Vaughn, Owen Wilson, Luke Wilson and Will Ferrell have made appearances in so many of the same films (whether as lead characters or cameos) that USA Today coined the term "Frat Pack" to name the group. Actor Adam Sandler is also known for frequently casting fellow Saturday Night Live performers (including Rob Schneider and David Spade) in various roles in his films (as well as making cameo appearances of his own in theirs, most of which he co-produces). Sam Raimi frequently uses his brother Ted and Bruce Campbell in his films.

The American singer/actress Cher has had a couple of cameos over the years. She had two cameos in Will & Grace and she even had a few in the 1990s.

Actor Edward Norton appears as himself in the satirical film The Dictator (2012) starring Sacha Baron Cohen.

Al Pacino has an extended cameo in the film Jack and Jill (2011) starring Adam Sandler, where Pacino plays a fictional version of himself.

The mangaka Shotaro Ishinomori made many cameos in his Kamen Rider series.

The animated series Adventures of Tintin featured its author Hergé in all the episodes. 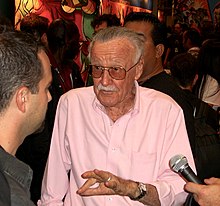 Stan Lee was well known for his cameo appearances throughout most of the Marvel films.

Stephen King is famous for making short cameo appearances in almost every movie that is made based on his novels.

An Adventure in Space and Time, a drama about how Doctor Who began, features many actors from the show's past, including two past companions in a party scene, another as a mother calling her children in for dinner and a fourth in a car park at the BBC.

In the movie adaptation of Les Miserables, Colm Wilkinson, who originated the role of Jean Valjean in the West End and on Broadway, made a cameo as the Bishop of Digne.

In the soviet film Moscow Does not Believe in Tears famous actor Innokenty Smoktunovsky appears for a minute as himself.

Films based on actual events occasionally include cameo guest appearances by the people portrayed in them. In The Pursuit of Happyness, Chris Gardner makes a cameo at the end. 24 Hour Party People, a film about Tony Wilson, has a cameo by the real Tony Wilson and many other notable people. In the film Apollo 13, James Lovell (the real commander of that flight) and his wife Marilyn appear next to the actors playing them (Tom Hanks and Kathleen Quinlan respectively). Domino Harvey makes a short appearance in the credits of Domino, while the real Erin Brockovich has a cameo appearance as a waitress named Julia in the eponymous movie (where her role is played by the actress Julia Roberts). Sophie Wilson has a cameo as a barmaid in Micro Men, which shows her work for Acorn Computers. In a flashback sequence in Fear and Loathing in Las Vegas, Raoul Duke (played by Johnny Depp) runs into the real-life Hunter S. Thompson, upon whom the character of Duke is based, leading him to remark "There I was...mother of God, there I am! Holy fuck."

Tom Morello, American guitarist and musician, makes an appearance in the Marvel film Iron Man (2008), in which he also participated in the soundtrack.

Elon Musk and Larry Ellison, both founders of large technology companies, are featured in cameos in the blockbuster Iron Man 2 (2010).

The king of Sweden, Carl XVI Gustaf, was in the children's program Mika (Mika och renen Ossian på äventyr) when Mika was in Stockholm with his reindeer.

In The Wolf of Wall Street (2013), the real Jordan Belfort appears as an emcee to introduce Leonardo DiCaprio (who plays Belfort in the film) at the final scene.

Alan Bennett makes a cameo appearance at the end of his film The Lady in the Van.

Boxer Roberto Duran and his wife Felicidad made a cameo appearance towards the end of the Hands of Stone film, about Duran's life. The pair were played by Edgar Ramirez and Ana de Armas, respectively.

An unusual example of a famous non-actor being given a small but speaking fictional role occurred in the Star Trek: The Next Generation episode "Second Chances." Dr. Mae Jemison, an astronaut, the first Black woman in space, and a long-time fan of Star Trek, was offered the opportunity to appear on the show. She was given the role of a Starfleet crewmember and a few lines, becoming the first real-life astronaut to appear on Star Trek.