The Cape Flats (Afrikaans: Die Kaapse Vlakte) is an expansive, low-lying, flat area situated to the southeast of the central business district of Cape Town.

Landsat image of Cape Town and environs, looking roughly east. Cape Peninsula in the foreground; Table Bay with Robben Island to the left; False Bay with Seal Island (small white dot) to the right. The mountains of the Boland to the rear. The oval (long axis about 25km) roughly encompasses the Cape Flats.

In geological terms, the area is essentially a vast sheet of aeolian sand, ultimately of marine origin, which has blown up from the adjacent beaches over a period on the order of a hundred thousand years. Below the sand, the bedrock is in general the Malmesbury Shale, except on part of the western margin between Zeekoevlei to the south and Claremont and Wetton to the north, where an intrusive mass of Cape Granite is to be found.

The western boundary of the Cape Flats consisting of Constantia Nek, the Back Table, Table Mountain, and Devil's Peak. From the Cape Flats Table Mountain is seen "side on", and therefore does not resemble the flat-topped mountain depicted in most of the scenic views of this iconic massif. The continuation of the Cape Peninsula mountain chain southwards from Constantia Nek (i.e. beyond the left hand border of the photograph) as far as False Bay, are Vlakkenberg, Constantiaberg (with its prominent TV mast), Steenberg and the Muizenberg. This view of Table Mountain is the one that greets a visitor to Cape Town arriving by road from the east (particularly along the N2). The distance from Constantia Nek to the lower slopes of Devil's Peak on the right hand side of the photograph is 9 km (as the crow flies).

To the west the expanse of the Cape Flats is limited by rising ground that slopes up to the steep cliffs of the Cape Peninsula mountain chain (see the photograph on the left), while in the east the land rises gradually towards the equally rugged cliffs of Hottentots Holland mountains and other elevated regions of the interior of the Boland.

Most of the sand is unconsolidated; however, in some places near the False Bay coast the oldest sand dunes have been cemented into a soft sandstone. These formations contain important fossils of animals such as the extinct Cape lion and also provide evidence that stone-age people hunted here tens of thousands of years ago.

The area has a Mediterranean climate, with warm dry summers and cool, damp winters. It is generally exposed to the wind, both from the NW (winter) and SE (summer). Flooding can be a problem, especially in July and August. Cold wet spells, especially in August and September, can make life very difficult for those living in sub-standard housing.

The noted English naturalist, William John Burchell, remarked in 1811 that the deep sand of the Flats made travel by cart or wagon extremely difficult. The situation was aggravated by a widespread shortage of firewood, causing fuel collectors to cut the relatively few indigenous shrubs and trees that stabilised the sand.

During the second half of the 19th century, the area was completely overrun by alien vegetation, mainly of Australian origin. The plants included hakeas and especially wattles (genus Acacia). The principal reason for this infestation lay in decisions made by the colonial authorities. It was an era before the advent of modern technological methods for the construction of permanent roads and in those days the Cape Flats was a massive sea of unstabilised sand dunes that moved at will before the winds. This made travel between Cape Town and the interior very difficult, particularly for the large ox-drawn wagons of the time. The authorities decided to try to stabilise the sand with plants native to the British colonies of New South Wales and Western Australia.

The earliest importation of wattles was in 1827. Massive plantings were established in the 1840s and 1850s and the work continued until well after 1875.

At the time, the plan worked well enough: the march of the dunes was arrested. The price paid, in ecological terms, was that the Cape Flats was carpeted by invasive species. Serious efforts have in recent years been made to roll back this alien scourge.

The Cape Flats has undergone revolutionary change in the past half a century. In 1950 the area was practically uninhabited. There was a single, narrow road across the Flats from Cape Town to The Strand that ran between walls of alien rooikrans bushes and one could travel for miles without seeing any sign of habitation other that a few fences and a handful of farmhouses. Native antelope roamed at will between the dense thickets of wattles. The army used the area for military exercises and the few farmers who inhabited the Flats eked out a living by growing vegetables in pockets of relatively poor soil between the barren dunes. Modern amenities were unknown; telephones were unknown, drinking water was collected in tanks from roofs and at night the rooms were lit by oil lamps.

West Side and Thug Life murals in the Coloured township of Manenberg, in Hard Livings gang territory 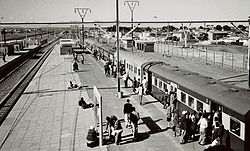 The era of sand and antelopes vanished completely in little more than a generation. Vegetable farming persisted, but to a much lesser extent, because urbanisation enveloped vast tracts of land in short order. During the apartheid era, race-based legislation such as the Group Areas Act and pass laws either forced non-white people out of more central urban areas designated for white people and into government-built townships in the Cape Flats, or made living in the area illegal, forcing many people into informal settlements elsewhere in the Cape Flats. Large housing projects were built here, mostly as part of the Nationalist government's larger effort to force the so-called Coloured community out of the central and western areas of Cape Town, which were designated as white areas under the Group Areas Act. This meant that only whites could reside there permanently; as under the apartheid system black Africans were officially citizens of the independent homelands, regarded as temporary migrant workers, therefore having resident worker status. However, since many of the mostly Xhosa initial migrant workers bore children, these children who were born and raised in the Cape Town area—were designated under apartheid as residents of Bantustans, many were obliged to live in the area illegally, further contributing to the growth of informal settlements. Apartheid did not anticipate the eventuality of black migrant workers not returning to their homelands, effectively not permitting naturalization. Additionally, other large townships of black people (such as Khayelitsha and Gugulethu) grew up on the flats as a product of mostly informal settlement, but also forced government relocations to a lesser extent. These consisted in the main of shacks made of "tin" (in reality corrugated iron which, confusingly, is nowadays made from mild steel), cardboard and wood. In 1993, Cape Town had a housing backlog of approximately 40 000 houses and with the numbers of people migrating from the rural areas increasing each year, so the backlog increases. One of the major priorities of the RDP (Reconstruction & Development Programme) is to build houses.

The Cape Flats is home to a remarkable cultural history.

Its music spans from the serious-minded jazz of Abdullah Ibrahim and Basil Coetzee and their anthem "Mannenberg" (named after a Cape Flats township), to the bubbly pop hits of Brenda Fassie; and continues in a new hip-hop movement.

Its religious communities include (to name only a few), Afrikaans-speaking congregations of the Dutch Reformed Church, Rastafarian communities, people who engage only in traditional Xhosa practices, syncretic Xhosa Christian churches, evangelical Christian churches, and southern Africa's largest Muslim community (drawing its oldest roots from the historic Cape Muslim community, which dates back to the 17th century).

In the 1940s, a type of dental modification known as a passion gap became fashionable and remains popular today. The modification involves the removal of a person's top front teeth.

Its political history is complex and sometimes baffling even to insiders: for instance, the politics of the Coloured communities of the Cape Flats have included Trotskyist activism in earlier years, and mobilisation for the United Democratic Front in the 80s; and then, widespread support for the historically white National Party (which had presided over apartheid) in the early post-apartheid elections. More recently, the area has seen an expansion of African National Congress strength from its base in the black townships and into historically Coloured areas, as well as a particularly strong local growth of left-wing social movements like the Treatment Action Campaign which offer a critique of government policies. Sometimes violent Islamist movements have emerged from Cape Flats communities, along with other notable figures within the Muslim community, such as Fareed Ishaq, who embody an ecumenical strain of religious progressivism.

Almost all of the communities of the Cape Flats remain, to one degree or another, poverty stricken. Serious social problems include a high rate of unemployment and disturbing levels of gang activity. During the late 1990s and early 2000s, there was significant armed conflict between various gangs and PAGAD (People Against Gangsterism and Drugs), a vigilante organisation. Post-apartheid development projects, such as the RDP, have also led to violent conflicts within communities. As of 2014, efforts to combat gangs include Hanover Park’s Ceasefire programme, where former gang members "use their experiences to mediate gang disputes and help young men and women quit gang life.

A wide range of community empowerment organisations work non-violently to combat poverty, crime and health problems, and the role of civil society in many parts of the area is relatively strong.

Natural habitats on the Cape Flats

Suburbs on the Cape Flats