Cape Malays (Afrikaans: Kaapse Maleiers) also known as Cape Muslims or Malays, are a Muslim community or ethnic group in South Africa. They are the descendants of enslaved and free Muslims from different parts of the world who lived in the Cape during Dutch and British rule.

Although the initial members of the community were from the Dutch colonies of South East Asia, by the 19th century, the term Malay encompassed all practicing Muslims at the Cape, regardless of origin. They used Malay as a lingua franca and language of religious instruction, and this was one of the likely reasons that the community were referred to as Malays.

The name Cape Malays derived from the Cape of Good Hope and the Malay people or Malay language, from the Dutch East Indies colony (present-day Indonesia), a Dutch colony for several centuries, and Dutch Malacca, which the Dutch held from 1641 to 1824. The community's earliest members were enslaved Javanese transported by the Dutch East India Company (VOC). Key figures in the arrival of Islam were Muslim leaders who resisted the company's rule in Southeast Asia. Some, like Sheikh Yusuf, were exiled to South Africa by the company, which founded and used Cape Town as a resupply station for ships travelling between Europe and Asia. They were followed by slaves from other parts of Asia and Africa, and although it is not possible to accurately reconstruct the origins of slaves in the Cape, it has been estimated that roughly equal proportions of Malagasies, Indians, Insulindians and continental Africans were imported to the Cape, with other estimates showing that the majority of slaves originated in Madagascar.

During the eighteenth century, Malay was the lingua franca of enslaved and free Muslims, though they came from East Africa, Madagascar, and India, as well as Indonesia. The use of the Malay language established the moniker "Malay" for all Muslims at the Cape irrespective of their geographic origins, and by the 19th century, the term was used to describe anyone at the Cape who was a practicing Muslim, despite Afrikaans having overtaken Malay as the group's lingua franca.

The Cape Malay identity can be considered the product of a set of histories and communities as much as it is a definition of an ethnic group. Since many Cape Malay people have found their Muslim identity to be more salient than their "Malay" ancestry, in some contexts they have been described as "Cape Malay", or "Malays" and others as Cape Muslim by people both inside and outside of the community. Cape Malay ancestry includes people from South and Southeast Asia, Madagascar, and native African groups. Later, Muslim male "Passenger Indian" migrants to the Cape married into the Cape Malay community, with their children being classified as Cape Malay.

The "Cape Malay" identity was also a subcategory of the "Coloured" category, in the terms of the apartheid-era government's racial classifications.

The term Malay may have originated from the Malayo-Portuguese language that was a lingua franca in many Asian ports.

Cape Malay samoosas, a Cape Malay traditional dish that witnessed a South Asian influence. The Indian influence in the Cape Malay culture is essential due to generations of widespread intermarriage and union between the two communities.

The founders of this community were the first to bring Islam to South Africa. The community's culture and traditions have also left an impact that is felt to this day. The Muslim community in Cape Town remains large and vibrant. It has expanded greatly beyond those exiles who started the first mosques in South Africa.

People in the Cape Malay community predominantly speak Afrikaans, but frequently also English. They no longer speak the languages which their ancestors used, such as Malay although various Malay words and phrases are still employed in daily usage.

Adaptations of traditional foods such as bredie, bobotie, sosaties and koeksisters are staples in many South African homes. Faldela Williams wrote three cookbooks, including The Cape Malay Cookbook, which became instrumental in preserving the cultural traditions of Cape Malay cuisine.

This cultural group developed a characteristic 'Cape Malay' music. An interesting secular folk song type, of Dutch origin, is termed the nederlandslied. The language and musical style of this genre reflects the history of South African slavery; it is often described and perceived as 'sad' and 'emotional' in content and context. The nederlandslied shows the influence of the Arabesque (ornamented) style of singing. This style is unique in South Africa, Africa and probably in the world.

Cape Malay music has been of great interest to academics, historians, musicologists, writers and even politicians. The well-known annual Cape Town Minstrel or Carnival street festival is a deep-rooted Cape Malay cultural event; it incorporates the Cape Malay comic song or moppie (often also referred to as ghoema songs). The barrel-shaped drum, called the 'ghoema', is also closely associated with Cape Malay music. 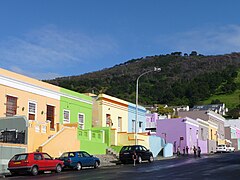 It is estimated that there are about 166,000 people in Cape Town who could be described as Cape Malay, and about 10,000 in Johannesburg. The picturesque Malay Quarter of Cape Town is found on Signal Hill, and is called the Bo-Kaap.

Many Cape Malay people also lived in District Six before they, among many other South African people of diverse ethnicity, were forcefully removed from their homes by the apartheid government and redistributed into townships on the Cape Flats.

Connections between Malaysians and South Africans took up when South Africa rejoined the international community. The latter's re-entry was welcomed by the Malaysian government and many others in the Southeast Asian region. Non-governmental organisations, such as the Federation of Malaysia Writers' Associations, have since set on linking up with the diasporic Cape Malay community. There is also an increase in the interest of the food, culture and heritage of Cape Malay descendants around the world.