Not to be confused with Carbolic acid.
Chemical compound

In chemistry, carbonic acid is a dibasic acid with the chemical formula H2CO3. The pure compound decomposes at temperatures greater than ca. -80 °C.

In biochemistry, the name "carbonic acid" is often applied to aqueous solutions of carbon dioxide, which play an important role in the bicarbonate buffer system, used to maintain acid–base homeostasis. 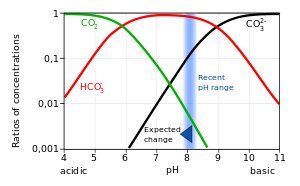 In aqueous solution carbonic acid behaves as a dibasic acid. The Bjerrum plot shows typical equilibrium concentrations,in solution, in seawater, of carbon dioxide and the various species derived from it, as a function of pH.
Expected change refers to predicted effect of continued ocean acidification. The acidification of natural waters is caused by the increasing concentration of carbon dioxide in the atmosphere, which is believed to be caused by the burning of increasing amounts of coal and hydrocarbons.
It has been estimated that the increase in dissolved carbon dioxide has caused the ocean's average surface pH to decrease by about 0.1 from pre-industrial levels. This phenomenon is called ocean acidification.

The stability constants database contains 136 entries with values for the overall protonation constants, β1 and β2, of the carbonate ion. In the following expressions [H+] represents the concentration, at equilibrium, of the chemical species H+, etc.

The value of log β1 decreases with increasing ionic strength, I. At 25°C:

At I=0 and 25°C the pK values of the stepwise dissociation constants are 6.77 and 9.93. When pH = pK the two chemical species in equilibrium with each other have the same concentration.

Note 1: There are apparently conflicting values in the literature for pKa. Pines et al. cite a value for "pKapp" of 6.35, consistent with the value 6.77, mentioned above. They also give a value for "pKa" of 3.49 and state that

where KD=[CO2]/[H2CO3]. (eqn. 3) The situation arises from the way that the dissociation constants are named and defined, which is clearly stated in the text of the Pines paper, but not in the abstract.

The hydration equilibrium constant at 25 °C is called Kh, which in the case of carbonic acid is [H2CO3]/[CO2] ≈ 1.7×10−3 in pure water and ≈ 1.2×10−3 in seawater. Hence, the majority of the carbon dioxide is not converted into carbonic acid, remaining as CO2 molecules. In the absence of a catalyst, the equilibrium is reached quite slowly. The rate constants are 0.039 s−1 for the forward reaction and 23 s−1 for the reverse reaction.

In nature, limestone may react with rainwater, forming a solution of calcium bicarbonate; evaporation of such a solution will result re-formation of solid calcium carbonate. These processes occur in the formation of stalactites and stalagmites.

When the enzyme carbonic anhydrase is also present in the solution the following reaction takes precedence.

When the amount of carbon dioxide created by the forward reaction exceeds its solubility, gas is evolved and a third equilibrium

must also be taken into consideration. The equilibrium constant for this reaction is defined by Henry's law. The two reactions can be combined for the equilibrium in solution.

When Henry's law is used to calculate the value of the term in the denominator care is needed with regard to dimensionality.

In physiology, carbon dioxide excreted by the lungs may be called volatile acid or respiratory acid.

Use of the term carbonic acid 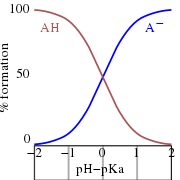 Speciation for a monoprotic acid, AH as a function of pH.

Since pKa1 has a value of ca. 6.8 , at equilibrium carbonic acid will be almost 50% dissociated in the extracellular fluid (cytosol) which has a pH of ca.7.2. Note that dissolved carbon dioxide in extracellular fluid is often called as "carbonic acid" in biochemistry literature, for historical reasons. The reaction in which it is produced

is fast in biological systems. Carbon dioxide can be described as the anhydride of carbonic acid.

Carbonic acid forms as a by-product of CO2/H2O irradiation, in addition to carbon monoxide and radical species (HCO and CO3). Another route to form carbonic acid is protonation of bicarbonates (HCO3−) with aqueous HCl or HBr. This has to be done at cryogenic conditions to avoid immediate decomposition of H2CO3 to CO2 and H2O. Amorphous H2CO3 forms above 120 K, and crystallization takes place above 200 K to give "β-H2CO3", as determined by infrared spectroscopy. The spectrum of β-H2CO3 agrees very well with the by-product after CO2/H2O irradiation. β-H2CO3 sublimes at 230 - 260 K largely without decomposition. Matrix-isolation infared spectroscopy allows for the recording of single molecules of H2CO3.

The fact that the carbonic acid may form by irradiating a solid H2O + CO2 mixture or even by proton-implantation of dry ice alone has given rise to suggestions that H2CO3 might be found in outer space or on Mars, where frozen ices of H2O and CO2 are found, as well as cosmic rays. The surprising stability of sublimed H2CO3 up to rather high-temperatures of 260 K even allows for gas-phase H2CO3, e.g., above the pole caps of Mars. Ab initio calculations showed that a single molecule of water catalyzes the decomposition of a gas-phase carbonic acid molecule to carbon dioxide and water. In the absence of water, the dissociation of gaseous carbonic acid is predicted to be very slow, with a half-life in the gas-phase of 180,000 years at 300 K. This only applies if the molecules are few and far apart, because it has also been predicted that gas-phase carbonic acid will catalyze its own decomposition by forming dimers, which then break apart into two molecules each of water and carbon dioxide.

Solid "α-carbonic acid" was claimed to be generated by a cryogenic reaction of potassium bicarbonate and a solution of HCl in methanol. This claim was disputed in a PhD thesis submitted in January 2014. Instead, isotope labeling experiments point to the involvement of carbonic acid monomethyl ester (CAME). Furthermore, the sublimed solid was suggested to contain CAME monomers and dimers, not H2CO3 monomers and dimers as previously claimed. Subsequent matrix-isolation infrared spectra confirmed that CAME rather than carbonic acid is found in the gas-phase above "α-carbonic acid". The assignment as CAME is further corroborated by matrix-isolation of the substance prepared in gas-phase by pyrolysis.

Despite its complicated history, carbonic acid may still appear as distinct polymorphs. Carbonic acid forms upon oxidization of CO with OH-radicals. It is not clear whether carbonic acid prepared in this way needs to be considered as γ-H2CO3. The structures of β-H2CO3 and γ-H2CO3 have not been characterized crystallographically.