In 2016, Entrepreneur listed Carl's Jr. as No. 54 on their Top Franchise 500 list, which ranks the overall financial strength, stability, and growth rate for the top 500 franchisees in any field across the United States.

As of March 2016, CKE (the parent company of Carl's Jr. and Hardee's) has a total of 3,664 franchised or company-operated restaurants in 44 states and 38 foreign countries and U.S. territories.

In 1941, Carl Karcher, who was a truck driver, and his wife Margaret Karcher, borrowed $311 on their Plymouth automobile and added $15 in savings to purchase a hot dog cart on the corner of Florence and Central in Los Angeles. From their newly purchased cart, they sold hot dogs, chili dogs, and tamales for a dime, and soda for a nickel. Within a few years, Carl and Margaret owned and operated four hot dog stands in Los Angeles. In 1945, the Karchers moved the short distance to Anaheim, California, and opened their first full-service restaurant, Carl's Drive-In Barbecue at 1108 N. Palm St. (now Harbor). In 1950, hamburgers were added to the menu for the first time.

In 1956, Karcher opened the first two Carl's Jr. restaurants – so named because they were a smaller version of Carl's Drive-In Barbecue restaurant – in Anaheim and Brea. The first local Carl's Jr. was built in 1956 on the former Janss Street next to St. Boniface Catholic Church about half a block away from Anaheim High School. That former Carl's Jr. is now the church's Bethany Hall. The current flagship Carl's Jr. is located at 1200 N. Harbor Blvd. By the end of the 1950s, there were four Carl's Jr. restaurants in Orange County, Calif. The restaurants also had a new supervisor, Donald F. Karcher, Carl's younger brother, who would later become the company's president.

By the 1960s, Carl was operating 24 restaurants in Southern California. The company incorporated in 1966 as Carl Karcher Enterprises, Inc., and launched a major expansion of the chain in 1968. The menus were limited for faster service, featuring charbroiled hamburgers, hot dogs, fries, and malts. 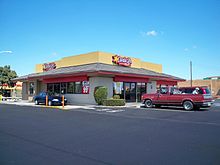 By 1975, there were more than 100 Carl's Jr. locations in Southern California, and the company expanded into the northern part of the state. Carl's Jr. celebrated its success by building its Anaheim corporate headquarters in 1976. The following year, it became the first QSR chain to offer salad bars in all 200 locations. The first out-of-state restaurant opened in Las Vegas in 1979. By the end of the decade, sales exceeded the $100 million mark.

In 1980, the company hired its 10,000th employee, doubling its employee count in just three years. In 1981, with 300 restaurants in operation, Carl Karcher Enterprises became a publicly held company. In 1984, Carl's Jr. was franchised for the first time. Carl's Jr.'s menu expanded during the decade with the addition of the Western Bacon Cheeseburger, breakfast items, a charbroiled chicken sandwich line, and self-service soda fountains. By the end of the decade, sales topped $480 million at 534 restaurants. The company also opened its first international units in the Pacific Rim. In addition, Carl's Jr. was one of the first chains to introduce a debit card payment system, inviting customers to use their ATM cards in the restaurants.

In 1988, Karcher and his family were accused of insider trading by the Securities and Exchange Commission. They had sold large quantities of stock before the price dropped. Karcher agreed to a settlement with the SEC and paid more than half a million dollars in fines. 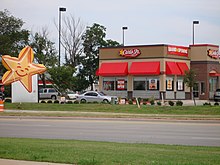 Former Carl's Jr. in Denton, Texas. This location closed in 2018.

Carl's Jr. chains had struggled to gain success in Arizona and Texas, perhaps diminishing hopes of expansion to other states, though later states like Nevada, Oregon, and Washington proved successful. During the 1990s, Karcher and the board of directors began clashing, often publicly, over marketing and business practices, including the chain's attempt at dual branding with such chains as The Green Burrito and its new advertising campaigns. Karcher was removed as chairman of the company by its board of directors on October 1, 1993. Soon after, the board of directors took a new approach by cutting the menu, lowering prices, and introducing a new marketing campaign which targeted younger urban and suburban males.

During the mid-1990s, Carl's Jr. unveiled its "If it doesn't get all over the place, it doesn't belong in your face" campaign, which featured younger people eating Carl's Jr.'s burgers with ketchup and juice dripping from the burger and onto clothes and other areas.

In 1997, CKE Restaurants acquired Hardee's, a restaurant chain with 2,500 locations in the Midwest, South, and East Coast regions.

In 2001, Carl's Jr. introduced the Thickburger line with the 1/2 lb. Six Dollar Burger, with sister chain Hardee's following in 2003.

In 2002, CKE Restaurants acquired Santa Barbara Restaurant Group, the parent company of the Green Burrito brand. Some Carl's Jr. stores are now co-branded with Green Burrito, as are some Hardee's stores.

In 2003, the company moved its headquarters to Carpinteria, California.

On January 11, 2008, Carl Karcher, the founder of hamburger chain Carl's Jr., died at the age of 90. A spokeswoman for CKE Restaurants said Karcher suffered from Parkinson's disease and was being treated for Parkinson's-related pneumonia when he died at St. Jude Medical Center in Fullerton, California. Many Carl's Jr. restaurants flew their flags at half-staff in memory of Karcher.

In July 2010, CKE Restaurants Holdings, Inc. was acquired by Columbia Lake Acquisition Holdings, Inc., an affiliate of Apollo Management VII, L.P. allowing CKE to continue to grow and succeed as a privately held company under the ownership of Apollo.

In December 2014, Carl's Jr. introduced the All-Natural Burger, featuring an all-natural, grass-fed, free-range beef patty that has no added hormones, antibiotics, or steroids – the first major fast-food chain to offer an all-natural beef patty on the menu. In December 2015, the All-Natural Turkey Burger was introduced – the fast food industry's first.

In September 2017, CKE decided to re-brand its Poughkeepsie, New York and Middletown, New York Hardee's locations into Carl's Jr. in order to focus on lunch and dinner options for a New England consumer base, however both those stores have closed.

Although, since 1997 both Hardee's and Carl's Jr operated essentially as one brand, 2018 saw CKE Restaurants announced plans to try to separate their identities. Part of the effort involved remodeling several Hardee's restaurants as well as giving both brands distinct ad campaigns. Although both chains at the time of the split shared the same menu CKE noted that they would slowly change over time although with "some overlap"

In January 2019, Carls Jr. introduced a Beyond Meat patty as an addition to their menu. They were one of the first large chain restaurants to introduce a vegan-friendly patty to their menu and roll it out to all of their locations. Soon after Burger King and many others followed by adding plant-based burgers to their menus.

In mid-March 2020, all restaurants abandoned indoor dining to combat the COVID-19 pandemic. Customers can still make their orders via drive thru, pick-up or take-away service.

A portobello mushroom burger and fries from the Carl's Jr. in Plaza Semanggi, Jakarta, Indonesia

CKE conducts an annual Stars for Heroes in-store fundraising campaign at both Carl's Jr. and Hardee's to benefit U.S. military veterans and their families. Since the program's launch in 2011, Stars for Heroes has raised nearly $5 million.

When Carl's Jr. first started rebranding Hardee's locations into the Carl's Jr. name, both chains mostly kept separate ads. This changed with the now-infamous Paris Hilton ad (see below) and the "Without us, some guys would starve." Campaign, which aired as either for Carl's Jr. or Hardee's, depending on where the ads aired. This would continue with other ads for the next several years, including ads by Kate Upton, Kim Kardashian, Emily Ratajkowski, Sara Jean Underwood, Hannah Ferguson, Heidi Klum, Charlotte McKinney, Ronda Rousey, Padma Lakshmi, and Hayden Panettiere.

In January 1997, commercials featuring NBA player Dennis Rodman were pulled after he was fined a then record $25,000 fine and suspended 11 games for kicking a cameraman in the groin during a game in Minneapolis, Minnesota and then his commercials resumed airing after his suspension was over but in June of that same year, his commercials were pulled for good after he was fined a then-record $50,000 for using profanity against Mormons during a game in Salt Lake City, Utah.

In 2005, Carl's Jr. launched a marketing campaign featuring bikini-clad models posing suggestively to capture the "hungry, young guy" demographic. The advertisements were criticized for objectifying women and prompted calls to boycott Carl's Jr. Company CEO Andrew Puzder defended the campaign in Entrepreneur magazine, saying, "I like our ads. I like beautiful women eating burgers in bikinis. I think it's very American."

In the years before his death in 2008, Karcher objected to the sexualized nature of the company's advertising, and was reported "just heartbroken" that a company he founded on Christian principles has taken such an amoral act." Karcher had previously critiziced CKE's previous campaigns during the 1990s.

In May 2005, Carl's Jr. introduced its "Spicy BBQ Six Dollar Burger" in a television advertisement created by Mendelsohn Zien Advertising. The ad features Paris Hilton in a provocative swimsuit soaping up a Bentley automobile and crawling all over it before taking a big bite out of her burger and giving her signature phrase, "That's hot." The commercial was directed by Chris Applebaum.

With the two chains selling many common menu items by 2013, Carl's Jr. began to advertise nationally in conjunction with Hardee's for products sold by both brands.

In January 2015, Carl's Jr. released a commercial online featuring model Charlotte McKinney advertising its new All Natural Burger to air regionally during Super Bowl XLIX. The ad features McKinney walking around a farmers' market, implying that she is "all natural", and uses double entendres to suggest that she is naked with strategically placed items in the market until it reveals McKinney in a bikini eating the All Natural Burger. Critics suggest that the ad "sets feminism back four decades," while others, including McKinney's elderly grandfather, enjoyed the ad. The ad now features Hardee's co-branding as the All Natural Burger is now offered by Hardee's. As of June 2016, Charlotte McKinney's "Au Natural" ad debut has garnered over 4.5 billion media impressions worldwide and more than 13 million views on the chains' YouTube channel.

In March 2017, Carl's Jr. released a commercial featuring a white-bearded character named Carl Hardee Sr. (played by Charles Esten) who had come back into the office (much to the delight of the employees) to find his son Carl Jr. (Drew Tarver) who was focusing on sex appeal over its food. The commercial marked a turning point in CKE's advertising, claiming it wanted to move away from its provocative ads and focus more on food and as a competitor to Five Guys, Steak 'n Shake, and In-N-Out Burger. "Carl Hardee Sr." is also expected to become the new company spokesperson.

The Call of Carl's campaign

In 2018, CKE resumed producing separate campaigns for their Hardee's and Carl's Jr. brands. For Carl's Jr., it started The Call of Carl's campaign featuring the voice of Academy Award-winning actor Matthew McConaughey.