The orange ring surrounding Grand Prismatic Spring is due to carotenoid molecules, produced by mats of algae and bacteria.

Carotenoids (/kəˈrɒtɪnɔɪd/), also called tetraterpenoids, are yellow, orange, and red organic pigments that are produced by plants and algae, as well as several bacteria, and fungi. Carotenoids give the characteristic color to pumpkins, carrots, corn, tomatoes, canaries, flamingos, salmon, lobster, shrimp, and daffodils. Carotenoids can be produced from fats and other basic organic metabolic building blocks by all these organisms. The only land dwelling arthropods known to produce carotenoids are aphids, and spider mites, which acquired the ability and genes from fungi. It is also produced by endosymbiotic bacteria in whiteflies. Carotenoids from the diet are stored in the fatty tissues of animals, and exclusively carnivorous animals obtain the compounds from animal fat. In the human diet, absorption of carotenoids is improved when consumed with fat in a meal. Cooking carotenoid-containing vegetables in oil and pulverizing the vegetable into juice or paste both increase carotenoid bioavailability.

There are over 1,100 known carotenoids which can be further categorized into two classes, xanthophylls (which contain oxygen) and carotenes (which are purely hydrocarbons and contain no oxygen). All are derivatives of tetraterpenes, meaning that they are produced from 8 isoprene molecules and contain 40 carbon atoms. In general, carotenoids absorb wavelengths ranging from 400 to 550 nanometers (violet to green light). This causes the compounds to be deeply colored yellow, orange, or red. Carotenoids are the dominant pigment in autumn leaf coloration of about 15-30% of tree species, but many plant colors, especially reds and purples, are due to polyphenols.

Macular pigments of the human eye

Carotenoids serve two key roles in plants and algae: they absorb light energy for use in photosynthesis, and they provide photoprotection via non-photochemical quenching. Carotenoids that contain unsubstituted beta-ionone rings (including beta-carotene, alpha-carotene, beta-cryptoxanthin, and gamma-carotene) have vitamin A activity (meaning that they can be converted to retinol). In the eye, lutein, meso-zeaxanthin, and zeaxanthin are present as macular pigments whose importance in visual function, as of 2016, remains under clinical research. 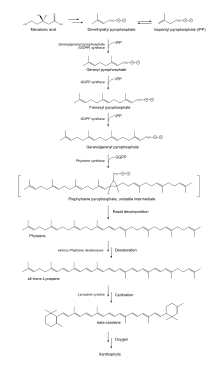 The basic building blocks of carotenoids are isopentenyl diphosphate (IPP) and dimethylallyl diphosphate (DMAPP). These two isoprene isomers are used to create various compounds depending on the biological pathway used to synthesize the isomers. Plants are known to use two different pathways for IPP production: the cytosolic mevalonic acid pathway (MVA) and the plastidic methylerythritol 4-phosphate (MEP). In animals, the production of cholesterol starts by creating IPP and DMAPP using the MVA. For carotenoid production plants use MEP to generate IPP and DMAPP. The MEP pathway results in a 5:1 mixture of IPP:DMAPP. IPP and DMAPP undergo several reactions, resulting in the major carotenoid precursor, geranylgeranyl diphosphate (GGPP). GGPP can be converted into carotenes or xanthophylls by undergoing a number of different steps within the carotenoid biosynthetic pathway.

The conversion of phytoene to lycopene in plants and cyanobacteria (left) differs compared to bacteria and fungi (right).

Two GGPP molecules condense via phytoene synthase (PSY), forming the 15-cis isomer of phytoene. The subsequent conversion into all-trans-lycopene depends on the organism. Bacteria and fungi employ a single enzyme, the bacterial phytoene desaturase (CRTI) for the catalysis. Plants and cyanobacteria however utilize four enzymes for this process. The first of these enzymes is a plant-type phytoene desaturase which introduces two additional double bonds into 15-cis-phytoene by dehydrogenation and isomerizes two of its existing double bonds from trans to cis producing 9,15,9’-tri-cis-ζ-carotene. The central double bond of this tri-cis-ζ-carotene is isomerized by the zeta-carotene isomerase Z-ISO and the resulting 9,9'-di-cis-ζ-carotene is dehydrogenated again via a ζ-carotene desaturase (ZDS). This again introduces two double bonds, resulting in 7,9,7’,9’-tetra-cis-lycopene. CRTISO, a carotenoid isomerase, is needed to convert the cis-lycopene into an all-trans lycopene in the presence of reduced FAD.

This all-trans lycopene is cyclized; cyclization gives rise to carotenoid diversity, which can be distinguished based on the end groups. There can be either a beta ring or an epsilon ring, each generated by a different enzyme (lycopene beta-cyclase [beta-LCY] or lycopene epsilon-cyclase [epsilon-LCY]). Alpha-carotene is produced when the all-trans lycopene first undergoes reaction with epsilon-LCY then a second reaction with beta-LCY; whereas beta-carotene is produced by two reactions with beta-LCY. Alpha- and beta-carotene are the most common carotenoids in the plant photosystems but they can still be further converted into xanthophylls by using beta-hydrolase and epsilon-hydrolase, leading to a variety of xanthophylls.

It is believed that both DXS and DXR are rate-determining enzymes, allowing them to regulate carotenoid levels. This was discovered in an experiment where DXS and DXR were genetically overexpressed, leading to increased carotenoid expression in the resulting seedlings. Also, J-protein (J20) and heat shock protein 70 (Hsp70) chaperones are thought to be involved in post-transcriptional regulation of DXS activity, such that mutants with defective J20 activity exhibit reduced DXS enzyme activity while accumulating inactive DXS protein. Regulation may also be caused by external toxins that affect enzymes and proteins required for synthesis. Ketoclomazone is derived from herbicides applied to soil and binds to DXP synthase. This inhibits DXP synthase, preventing synthesis of DXP and halting the MEP pathway. The use of this toxin leads to lower levels of carotenoids in plants grown in the contaminated soil. Fosmidomycin, an antibiotic, is a competitive inhibitor of DXP reductoisomerase due to its similar structure to the enzyme. Application of said antibiotic prevents reduction of DXP, again halting the MEP pathway.

The structure of carotenoids allows for biological abilities, including photosynthesis, photoprotection, plant coloration, and cell signaling.

The general structure of the carotenoid is a polyene chain consisting of 9-11 double bonds and possibly terminating in rings. This structure of conjugated double bonds leads to a high reducing potential, or the ability to transfer electrons throughout the molecule. Carotenoids can transfer excitation energy in one of two ways: 1) singlet-singlet energy transfer from carotenoid to chlorophyll, and 2) triplet-triplet energy transfer from chlorophyll to carotenoid. The singlet-singlet energy transfer is a lower energy state transfer and is used during photosynthesis. The length of the polyene tail enables light absorbance in the photosynthetic range; once it absorbs energy it becomes excited, then transfers the excited electrons to the chlorophyll for photosynthesis. The triplet-triplet transfer is a higher energy state and is essential in photoprotection. Light produces damaging species during photosynthesis, with the most damaging being reactive oxygen species (ROS). As these high energy ROS are produced in the chlorophyll the energy is transferred to the carotenoid’s polyene tail and undergoes a series of reactions in which electrons are moved between the carotenoid bonds in order find the most balanced state (lowest energy state) for the carotenoid.

The length of carotenoids also has a role in plant coloration, as the length of the polyene tail determines which wavelengths of light the plant will absorb. Wavelengths that are not absorbed are reflected and are what we see as the color of a plant. Therefore, differing species will contain carotenoids with differing tail lengths allowing them to absorb and reflect different colors.

Carotenoids belong to the category of tetraterpenoids (i.e., they contain 40 carbon atoms, being built from four terpene units each containing 10 carbon atoms). Structurally, carotenoids take the form of a polyene hydrocarbon chain which is sometimes terminated by rings, and may or may not have additional oxygen atoms attached.

Their color, ranging from pale yellow through bright orange to deep red, is directly linked to their structure. Xanthophylls are often yellow, hence their class name. The double carbon-carbon bonds interact with each other in a process called conjugation, which allows electrons in the molecule to move freely across these areas of the molecule. As the number of conjugated double bonds increases, electrons associated with conjugated systems have more room to move, and require less energy to change states. This causes the range of energies of light absorbed by the molecule to decrease. As more wavelengths of light are absorbed from the longer end of the visible spectrum, the compounds acquire an increasingly red appearance.

Carotenoids are usually lipophilic due to the presence of long unsaturated aliphatic chains as in some fatty acids. The physiological absorption of these fat-soluble vitamins in humans and other organisms depends directly on the presence of fats and bile salts.

Beta-carotene, found in pumpkins, sweet potato, carrots and winter squash, is responsible for their orange-yellow colors. Dried carrots have the highest amount of carotene of any food per 100-gram serving, measured in retinol activity equivalents (provitamin A equivalents). Vietnamese gac fruit contains the highest known concentration of the carotenoid lycopene. Although green, kale, spinach, collard greens, and turnip greens contain substantial amounts of beta-carotene. The diet of flamingos is rich in carotenoids, imparting the orange-colored feathers of these birds.

Reviews of epidemiological studies seeking correlations between carotenoid consumption in food and clinical outcomes have come to various conclusions:

Carotenoids are also important components of the dark brown pigment melanin, which is found in hair, skin, and eyes. Melanin absorbs high-energy light and protects these organs from intracellular damage.

Humans and other animals are mostly incapable of synthesizing carotenoids, and must obtain them through their diet. Carotenoids are a common and often ornamental feature in animals. For example, the pink color of salmon, and the red coloring of cooked lobsters and scales of the yellow morph of common wall lizards are due to carotenoids. It has been proposed that carotenoids are used in ornamental traits (for extreme examples see puffin birds) because, given their physiological and chemical properties, they can be used as visible indicators of individual health, and hence are used by animals when selecting potential mates.

Yellow and orange leaf colors in autumn are due to carotenoids, which are visible after chlorophyll degrades for the season.

The most common carotenoids include lycopene and the vitamin A precursor β-carotene. In plants, the xanthophyll lutein is the most abundant carotenoid and its role in preventing age-related eye disease is currently under investigation. Lutein and the other carotenoid pigments found in mature leaves are often not obvious because of the masking presence of chlorophyll. When chlorophyll is not present, as in autumn foliage, the yellows and oranges of the carotenoids are predominant. For the same reason, carotenoid colors often predominate in ripe fruit after being unmasked by the disappearance of chlorophyll.

Carotenoids are responsible for the brilliant yellows and oranges that tint deciduous foliage (such as dying autumn leaves) of certain hardwood species as hickories, ash, maple, yellow poplar, aspen, birch, black cherry, sycamore, cottonwood, sassafras, and alder. Carotenoids are the dominant pigment in autumn leaf coloration of about 15-30% of tree species. However, the reds, the purples, and their blended combinations that decorate autumn foliage usually come from another group of pigments in the cells called anthocyanins. Unlike the carotenoids, these pigments are not present in the leaf throughout the growing season, but are actively produced towards the end of summer.

Products of carotenoid degradation such as ionones, damascones and damascenones are also important fragrance chemicals that are used extensively in the perfumes and fragrance industry. Both β-damascenone and β-ionone although low in concentration in rose distillates are the key odor-contributing compounds in flowers. In fact, the sweet floral smells present in black tea, aged tobacco, grape, and many fruits are due to the aromatic compounds resulting from carotenoid breakdown.

Some carotenoids are produced by bacteria to protect themselves from oxidative immune attack. The golden pigment that gives some strains of Staphylococcus aureus their name (aureus = golden) is a carotenoid called staphyloxanthin. This carotenoid is a virulence factor with an antioxidant action that helps the microbe evade death by reactive oxygen species used by the host immune system.

Retrieved from "https://en.wikipedia.org/w/index.php?title=Carotenoid&oldid=1003914709"
Uses material from the Wikipedia article Carotenoid, released under the CC BY-SA 3.0 license.