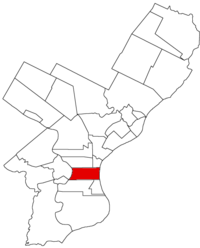 Center City includes the central business district and central neighborhoods of Philadelphia, in the U.S. state of Pennsylvania. It comprises the area that made up the City of Philadelphia prior to the Act of Consolidation, 1854 which extended the city borders to be coterminous with Philadelphia County. Greater Center City has grown into the second-most densely populated downtown area in the United States, after Midtown Manhattan in New York City, with an estimated 173,284 residents in 2010.

Center City is bounded by South Street to the south, the Delaware River to the east, the Schuylkill River to the west, and Vine Street to the north. This means that Center City occupies the boundaries of the city before it was made coterminous with Philadelphia County in 1854. The Center City District, which has special powers of taxation, has a complicated, irregularly shaped boundary that includes much but not all of this area, and also extends beyond it. The Philadelphia Police Department patrols three districts located within Center City – the 6th, 9th, 3rd and 17th districts. 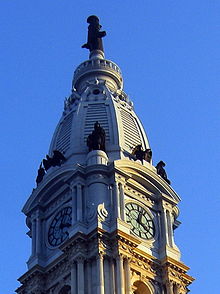 Center City is home to most of Philadelphia's tallest buildings, including Philadelphia's City Hall, the second tallest masonry building in the world and until 1987 the tallest in Philadelphia, as well as the tallest building in the world for seven years. In March 1987, One Liberty Place broke the gentlemen's agreement not to exceed the height of the statue of William Penn atop City Hall. Upon the completion of One Liberty Place, no Philadelphia major-league sports team won a world championship for the next two decades, a phenomenon known as the "Curse of Billy Penn." In an effort to reverse the curse, a 3-foot statue of Penn was affixed to the top of the Comcast Center upon its completion as the city's new tallest building in 2007. On October 29, 2008, the Philadelphia Phillies won the 2008 World Series, ending the "curse" 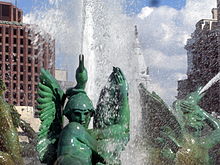 Other Center City skyscrapers include the BNY Mellon Center and the Three Logan Square, which houses a traffic camera used by the Philadelphia branch of the Westwood One MetroNetworks traffic service.

Across the street from City Hall is the Masonic Temple, the headquarters of the Grand Lodge of Pennsylvania, a legacy of the Founding Fathers and signers of the Declaration of Independence, many of whom were Freemasons; these include George Washington and Benjamin Franklin.

While Philadelphia's population declined, Center City's rose 10% between 1990 and 2000.

In 2007, the city designated the area bound by 11th Street, Broad Street, Chestnut Street and Pine Street as the Gayborhood. 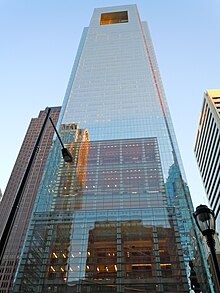 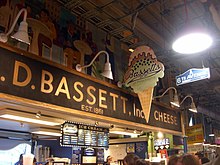 Lincoln National Corporation moved its headquarters from Indiana to Philadelphia in 1999. In Philadelphia Lincoln was headquartered in the West Tower of Centre Square in Center City. In 2007 the company moved 400 employees, including its top executives, to Radnor Township from Philadelphia.

The Federal Bureau of Prisons Northeast Region Office is in the U.S. Custom House, a part of the Independence National Historical Park, in Old City, Center City.

Residents are within the School District of Philadelphia.

From the 1940s to the opening of what is now known as the Greenfield School in 1954, many residents attended public schools in other areas and private schools due to the low number of public schools in Center City.

In 2005, to prevent the flight of middle-class families, the school district and the Center City District, an economic development agency, started a program that promoted public schools in Center City (including Rittenhouse Square and Society Hill) and adjacent areas in Fairmount, Northern Liberties, and South Philadelphia.

K-8 schools that have attendance boundaries in Center City and areas around Center City include:

Other high schools include:

Combined middle and high schools include:

Charter schools not operated by the School District of Philadelphia include:

Other private schools in the Center City area include:

The Free Library of Philadelphia operates the Parkway Central Library at 1901 Vine Street, the Independence Branch at 18 South 7th Street, the Philadelphia City Institute on the first floor and lower level of an apartment complex at 1905 Locust Street, and the Library for the Blind and Physically Handicapped at 919 Walnut Street.

Middle States Association of Colleges and Schools is headquartered in Center City. 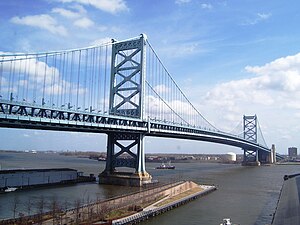 There is a 500,000+ sq ft underground pedestrian concourse that connects many of the center city Septa stations to businesses and office buildings. Primarily running under Market Street and Broad Street, the concourse spans east to west from 8th street to 18th street and north to south from John F. Kennedy Boulevard to Spruce Street. 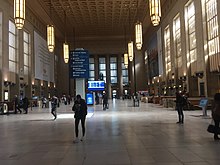 As of 2016[update] Taiwanese airline China Airlines provides a private bus service to and from John F. Kennedy International Airport in New York City for customers based in the Philadelphia area. This service previously stopped in Center City in front of the Marriott Hotel.

Panoramic view of Center City skyline, from the northwest