Chorazin (Greek: Χοραζίν /koʊˈreɪzɪn/; also Chorazain) or Korazim (Hebrew: כורזים‎; also Chorizim) was an ancient village in the Roman and Byzantine periods, best known from the Christian Gospels. It stood on the Korazim Plateau in the Galilee on a hill above the northern shore of the Sea of Galilee, two and a half miles from Capernaum.

Khirbat Karraza (also Karraza, Kh. Karazeh, Kerazeh) was an Arab village established at the site of the ancient village and depopulated during the 1947–1948 Civil War in Mandatory Palestine on May 4, 1948 by the Palmach's First Battalion during Operation Yiftach. It was located 8.5 km southeast of Safad.

The nearby Israeli town of Korazim is named for this location.

Chorazin, along with Bethsaida and Capernaum, was named in the gospels of Matthew and Luke as cities in which Jesus performed his mission. However, because these towns rejected his work ("they had not changed their ways"), they were subsequently cursed (Matthew 11:20–24; Luke 10:13–15). The gospels make no other mention of Chorazin or what works had occurred there. Due to the condemnation of Jesus, the influential Apocalypse of Pseudo-Methodius predicted that the Antichrist would be conceived in Chorazin.

Theologian John Lightfoot (1602–1675) suggested that Chorazin might have been an area around Cana in Galilee, rather than a single city/village:

What if, under this name, Cana be concluded, and some small country adjacent, which, from its situation in a wood, might be named "Chorazin", that is, 'the woody country'? Cana is famous for the frequent presence and miracles of Christ. But away with conjecture, when it grows too bold.

The Babylonian Talmud (redacted until c. 475) mentions that Chorazin was a town known for its grain (Menahot, 85a).

Two settlement phases[which?] have been proposed based on coin and pottery findings.

The town was partially destroyed in the 4th century, possibly as a result of an earthquake.

Khirbat Karraza in the PEF Survey of Palestine

Khirbat Karraza was populated by the Zanghariyya Bedouin tribe and the village contained a shrine for a local Muslim saint, al-Shaykh Ramadan. The villagers used to store grain close to the shrine, certain that nobody would steal it and thereby violate the sanctity of the shrine.

The Palestinian historian Walid Khalidi described the place in 1992: "The site serves as an archaeological and tourist area. Some village houses still stand, together with the remains of other houses. One of the old houses has been renovated. Also remaining is the tomb of Shaykh Ramadan, around which the village shrine had been built. The tomb is collapsing and the building in which it was housed no longer exists. It is surrounded by large carob trees." 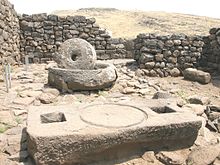 "Seat of Moses" made of basalt from the synagogue

In his Biblical Researches in Palestine in the mid-nineteenth century, Edward Robinson visited Khirbat Karraza, but concluded it was not the Biblical Chorazin, because the ruins were not significant enough and the site was not near the shore of the Sea of Galilee, as stated by Jerome (Lacum Genesareth, in cujus litore Capernaum et Tiberias et Bethsaida et Chorozaim sitæ sint):

In May–June 2004, a small-scale salvage excavation was conducted by the Israel Antiquities Authority along the route of an ancient road north of Moshav Amnun. In the literature, the road is referred to as "the way through Korazim." It crossed the Chorazin plateau from west to east, branching off from the main Cairo–Damascus road that ran northeast toward Daughters of Jacob Bridge.

The majority of the structures are made from basalt, a black volcanic rock found locally.

The main settlement dates to the 3rd and 4th centuries.

The town's ruins are spread over an area of 25 acres (100,000 m2), subdivided into five separate quarters, with a synagogue in the centre. Close by is a ritual bath (mikvah), surrounded by public and residential buildings.

Decorated stone from the synagogue

The only synagogue visible today was built in the late 3rd century, destroyed in the 4th century, and rebuilt in the 6th century.

The large, impressive synagogue which was built of basalt stones and decorated with Jewish motifs is the most striking of the surviving structures.

An unusual feature in an ancient synagogue is the presence of three-dimensional sculpture, a pair of stone lions. A similar pair of three-dimensional lions was found in the synagogue at Kfar Bar'am. Other carvings, which are thought to have originally been brightly painted, feature images of wine-making, animals, a Medusa, an armed soldier, and an eagle.

In 1926, archaeologists discovered the "Seat of Moses," carved from a basalt block. According to the New Testament, this is where the reader of the Torah sat (Matthew 23:1-3).

Jacob Ory, who excavated the site in 1926 on behalf of the British Mandate Department of Antiquities, wrote about a second synagogue ca. 200 m west of the first one, and he described it in detail. Later excavations, however, have not been able to find the remains noted by him.

The handful of olive millstones used in olive oil extraction found suggest a reliance on the olive for economic purposes, like a number of other villages in ancient Galilee.

The scholar and author M.R. James mentions "Chorazin" as a place of ill-repute and a location on "the black pilgrimage", in his 1904 short story, "Count Magnus".