Cinnamomum cassia, called Chinese cassia or Chinese cinnamon, is an evergreen tree originating in southern China, and widely cultivated there and elsewhere in South and Southeast Asia (India, Indonesia, Laos, Malaysia, Thailand, and Vietnam). It is one of several species of Cinnamomum used primarily for their aromatic bark, which is used as a spice. The buds are also used as a spice, especially in India, and were once used by the ancient Romans. 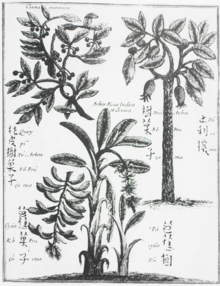 Most of the spice sold as cinnamon in the United States, United Kingdom, and India is Chinese cinnamon. "Indonesian cinnamon" (C. burmannii) is sold in much smaller amounts.

Chinese cassia is produced in both China and Vietnam. Until the 1960s, Vietnam was the world's most important producer of Saigon cinnamon, which has a higher oil content, and consequently has a stronger flavor. Because of the disruption caused by the Vietnam War, however, production of Indonesian cassia in the highlands of the Indonesia island of Sumatra was increased to meet demand. Indonesian cassia has the lowest oil content of the three types of cassia, so commands the lowest price. Chinese cassia has a sweeter flavor than Indonesian cassia, similar to Saigon cinnamon, but with lower oil content.

Cassia bark (both powdered and in whole, or "stick" form) is used as a flavoring agent for confectionery, desserts, pastries, and meat; it is specified in many curry recipes, where Ceylon cinnamon is less suitable. Cassia is sometimes added to Ceylon cinnamon, but is a much thicker, coarser product. Cassia is sold as pieces of bark (as pictured below) or as neat quills or sticks. Cassia sticks can be distinguished from Ceylon cinnamon sticks in this manner: Ceylon cinnamon sticks have many thin layers and can easily be made into powder using a coffee or spice grinder, whereas cassia sticks are extremely hard and are usually made up of one thick layer.

Cassia buds, although rare, are also occasionally used as a spice. They resemble cloves in appearance and have a mild, flowery cinnamon flavor. Cassia buds are primarily used in old-fashioned pickling recipes, marinades, and teas.

Cinnamomum cassia is known for its sweet flavor and can be used as food spices or medicinal herbs to combat illnesses. C. cassia is associated with the Earth element, and due it's sweet flavors it correlates with the yellow as its color.Traditional Chinese Medicine associates the Earth element with the spleen organ correlating with Yin, and the stomach organ correlating with Yang. Cinnamon can be useful when treating patients with deficiency of Qi in the stomach or spleen organs and symptoms from these organs can include diarrhea, lack of energy, and shortness of breath. Through the consumption of this Earth element, patients can replenish their deficiency of Qi and physicians can do so by observing the facial color of patients and associating with the disorder with its color. 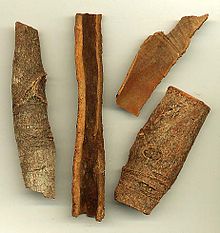 Chinese cassia (called ròuguì; 肉桂 in Chinese) is produced primarily in the southern provinces of Guangxi, Guangdong, and Yunnan. It is considered one of the 50 fundamental herbs in traditional Chinese medicine. More than 160 chemicals have been isolated from Cinnamomum cassia.

Due to a blood-thinning component called coumarin that could damage the liver if consumed in larger amounts, European health agencies have warned against consuming high amounts of cassia. Other bioactive compounds found in the bark, powder and essential oils of C. cassia are cinnamaldehyde and styrene. In high doses these substances can also be toxic for humans.