A vertical, or near vertical, rock face of substantial height 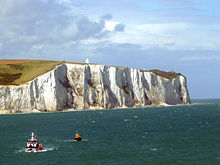 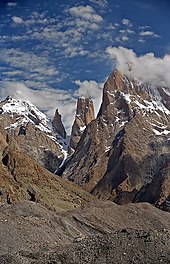 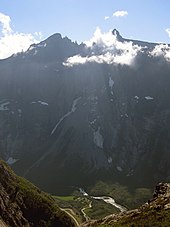 Europe's highest cliff, Troll Wall in Norway, a famous BASE jumping location for jumpers from around the world.

In geography and geology, a cliff is a vertical, or nearly vertical, rock exposure. Cliffs are formed as erosion landforms by the processes of weathering and erosion. Cliffs are common on coasts, in mountainous areas, escarpments and along rivers. Cliffs are usually formed by rock that is resistant to weathering and erosion. Sedimentary rocks most likely to form cliffs include sandstone, limestone, chalk, and dolomite. Igneous rocks such as granite and basalt also often form cliffs.

An escarpment (or scarp) is a type of cliff, formed by the movement of a geologic fault or landslide, or by differential erosion of rock layers of differing hardness.

Most cliffs have some form of scree slope at their base. In arid areas or under high cliffs, they are generally exposed jumbles of fallen rock. In areas of higher moisture, a soil slope may obscure the talus. Many cliffs also feature tributary waterfalls or rock shelters. Sometimes a cliff peters out at the end of a ridge, with mushroom rocks or other types of rock columns remaining. Coastal erosion may lead to the formation of sea cliffs along a receding coastline.

The far southwestern aspect of Nanga Parbat's Rupal face, highest cliff (rock wall/mountain face) in the world. The steepest part of the face is 2 km to the northeast.

Cliff comes from the Old English word clif of essentially the same meaning, cognate with Dutch, Low German, and Old Norse klif 'cliff'. These may in turn all be from a Romance loanword into Primitive Germanic that has its origins in the Latin forms clivus / clevus ("slope" or "hillside"). 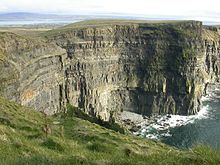 The Cliffs of Moher in Ireland 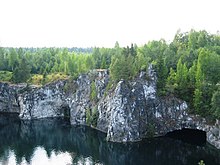 The Matengai in Oki Islands, Japan

Cliffs along the north shore of Isfjord, Svalbard, Norway.

Cliffs on the western shoreline of Sam Ford Fjord, Canada 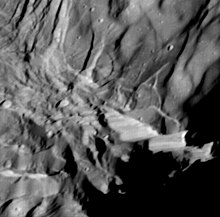 Close-up view of Verona Rupes, a 20 km high fault scarp on Miranda, a moon of Uranus. 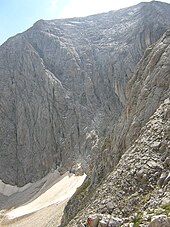 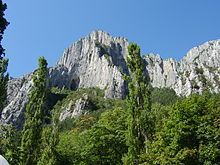 Given that a cliff does not need to be exactly vertical, there can be ambiguity about whether a given slope is a cliff or not and also about how much of a certain slope to count as a cliff. For example, given a truly vertical rock wall above a very steep slope, one could count just the rock wall or the combination. Listings of cliffs are thus inherently uncertain.

Some of the largest cliffs on Earth are found underwater. For example, an 8,000 m drop over a 4,250 m span can be found at a ridge sitting inside the Kermadec Trench.

The highest very steep non-vertical cliffs in the world are Nanga Parbat's Rupal Face and Gyala Peri's southeast face, which both rise approximately 4,600 m, or 15,000 ft, above their base. According to other sources, the highest cliff in the world, about 1,340 m high, is the east face of Great Trango in the Karakoram mountains of northern Pakistan. This uses a fairly stringent notion of cliff, as the 1,340 m figure refers to a nearly vertical headwall of two stacked pillars; adding in a very steep approach brings the total drop from the East Face precipice to the nearby Dunge Glacier to nearly 2,000 m.

The location of the world's highest sea cliffs depends also on the definition of 'cliff' that is used. Guinness World Records states it is Kalaupapa, Hawaii, at 1,010 m high. Another contender is the north face of Mitre Peak, which drops 1,683 m to Milford Sound, New Zealand. These are subject to a less stringent definition, as the average slope of these cliffs at Kaulapapa is about 1.7, corresponding to an angle of 60 degrees, and Mitre Peak is similar. A more vertical drop into the sea can be found at Maujit Qaqarssuasia (also known as the 'Thumbnail') which is situated in the Torssukátak fjord area at the very tip of South Greenland and drops 1,560 m near-vertically.

Considering a truly vertical drop, Mount Thor on Baffin Island in Arctic Canada is often considered the highest at 1370 m (4500 ft) high in total (the top 480 m (1600 ft) is overhanging), and is said to give it the longest vertical drop on Earth at 1,250 m (4,100 ft). However, other cliffs on Baffin Island, such as Polar Sun Spire in the Sam Ford Fjord, or others in remote areas of Greenland may be higher.

The highest cliff in the solar system may be Verona Rupes, an approximately 20 km (12 mi) high fault scarp on Miranda, a moon of Uranus.

The following is an incomplete list of cliffs of the world. 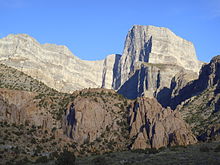 The face of Notch Peak at sunset 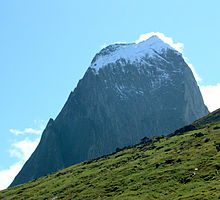 Several big granite faces in the Arctic region vie for the title of 'highest vertical drop on Earth', but reliable measurements are not always available. The possible contenders include (measurements are approximate):

of Baffin Island, rises 4,300 ft above the flat frozen fjord, although the lower portion of the face breaks from the vertical wall with a series of ledges and buttresses.

Other notable cliffs include: 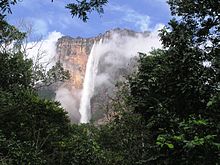 Cliff landforms provide unique habitat niches to a variety of plants and animals, whose preferences and needs are suited by the vertical geometry of this landform type. For example, a number of birds have decided affinities for choosing cliff locations for nesting, often driven by the defensibility of these locations as well as absence of certain predators.

Retrieved from "https://en.wikipedia.org/w/index.php?title=Cliff&oldid=1007161130"
Uses material from the Wikipedia article Cliff, released under the CC BY-SA 3.0 license.