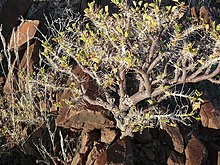 The genus of the myrrhs, Commiphora, is the most species-rich genus of flowering plants in the frankincense and myrrh family, Burseraceae. The genus contains approximately 190 species of shrubs and trees, which are distributed throughout the (sub-) tropical regions of Africa, the western Indian Ocean islands, the Arabian Peninsula, India, and Vietnam. The genus is drought-tolerant and common throughout the xerophytic scrub, seasonally dry tropical forests, and woodlands of these regions.

The common name myrrh refers to several species of the genus, from which aromatic resins are derived for various fragrance and medicinal uses by humans.

Leaves in Commiphora are pinnately compound (or very rarely unifoliolate). Many species are armed with spines. Bark is often exfoliating, peeling in thin sheets to reveal colorful, sometimes photosynthetic, bark below. Stems are frequently succulent, especially in species native to drier environments. Flowers are subdioecious and fruits are drupes, usually with a 2-locular ovary (one is abortive). In response to wounding, the stems of many species will exude aromatic resins.

Commiphora can serve as a model genus for understanding plant evolution in the drier regions of the Old World tropics, particularly in eastern continental Africa and Madagascar, where diversity in the genus is concentrated. The closely related sister genus to Commiphora, Bursera, has been used as a model genus to study patterns of evolution in the New World seasonally dry tropical forests.

Products from many species of Commiphora have been used for various purposes, sometimes as timber, building material, and natural fencing, but more often valued for the aromatic resins produced by several members of the genus. "Myrrh", the common name for these dried resins, is fragrant and has been used both as fragrance and for medicinal purposes (e.g., Balsam of Mecca, C. gileadensis). Use of myrrh resin is frequent and pronounced throughout historical texts of cultural significance, including the Bible.

Recent studies using DNA sequence data have confirmed the monophyly of Commiphora; however, this data suggests that previous classification of the genus into sections does not reflect monophyletic interspecific relationships.

Retrieved from "https://en.wikipedia.org/w/index.php?title=Commiphora&oldid=997967032"
Uses material from the Wikipedia article Commiphora, released under the CC BY-SA 3.0 license.