Group of interacting organisms sharing an environment; a social unit of humans
For other uses, see Community (disambiguation). 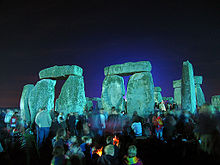 A community of interest gathers at Stonehenge, England, for the summer solstice.

A community is a social unit (a group of living things) with commonality such as norms, religion, values, customs, or identity. Communities may share a sense of place situated in a given geographical area (e.g. a country, village, town, or neighbourhood) or in virtual space through communication platforms. Durable relations that extend beyond immediate genealogical ties also define a sense of community, important to their identity, practice, and roles in social institutions such as family, home, work, government, society, or humanity at large.[need quotation to verify] Although communities are usually small relative to personal social ties, "community" may also refer to large group affiliations such as national communities, international communities, and virtual communities.

Human communities may have intent, belief, resources, preferences, needs, and risks in common, affecting the identity of the participants and their degree of cohesiveness.

Archaeological studies of social communities use the term "community" in two ways, paralleling usage in other areas. The first is an informal definition of community as a place where people used to live. In this sense it is synonymous with the concept of an ancient settlement - whether a hamlet, village, town, or city. The second meaning resembles the usage of the term in other social sciences: a community is a group of people living near one another who interact socially. Social interaction on a small scale can be difficult to identify with archaeological data. Most reconstructions of social communities by archaeologists rely on the principle that social interaction in the past was conditioned by physical distance. Therefore, a small village settlement likely constituted a social community and spatial subdivisions of cities and other large settlements may have formed communities. Archaeologists typically use similarities in material culture—from house types to styles of pottery—to reconstruct communities in the past. This classification method relies on the assumption that people or households will share more similarities in the types and styles of their material goods with other members of a social community than they will with outsiders.

In ecology, a community is an assemblage of populations of different species, interacting with one another. Community ecology is the branch of ecology that studies interactions between and among species. It considers how such interactions, along with interactions between species and the abiotic environment, affect community structure and species richness, diversity and patterns of abundance. Species interact in three ways: competition, predation and mutualism. Competition typically results in a double negative—that is both species lose in the interaction. Predation is a win/lose situation with one species winning. Mutualism, on the other hand, involves both species cooperating in some way, with both winning. The two main types of communities are major which are self-sustaining and self-regulating (such as a forest or a lake) and minor communities which rely on other communities (like fungi decomposing a log) and are the building blocks of major communities.

This is a simplified example of a community. A community includes many populations and how they interact with each other. In this example there's an interaction between the zebra and the bush, and the lion and the zebra, as well as the bird and the organisms by the water, like the worms.

In a seminal 1986 study, McMillan and Chavis identify four elements of "sense of community": 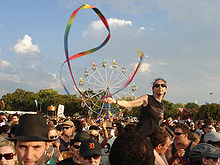 To what extent do participants in joint activities experience a sense of community?

A "sense of community index (SCI) was developed by Chavis and colleagues, and revised and adapted by others. Although originally designed to assess sense of community in neighborhoods, the index has been adapted for use in schools, the workplace, and a variety of types of communities.

Studies conducted by the APPA[who?] indicate that young adults who feel a sense of belonging in a community, particularly small communities, develop fewer psychiatric and depressive disorders than those who do not have the feeling of love and belonging. 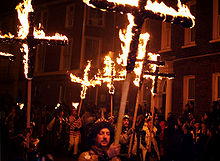 The process of learning to adopt the behavior patterns of the community is called socialization. The most fertile time of socialization is usually the early stages of life, during which individuals develop the skills and knowledge and learn the roles necessary to function within their culture and social environment. For some psychologists, especially those in the psychodynamic tradition, the most important period of socialization is between the ages of one and ten. But socialization also includes adults moving into a significantly different environment where they must learn a new set of behaviors.

Socialization is influenced primarily by the family, through which children first learn community norms. Other important influences include schools, peer groups, people, mass media, the workplace, and government. The degree to which the norms of a particular society or community are adopted determines one's willingness to engage with others. The norms of tolerance, reciprocity, and trust are important "habits of the heart," as de Tocqueville put it, in an individual's involvement in community.

Community development is often linked with community work or community planning, and may involve stakeholders, foundations, governments, or contracted entities including non-government organisations (NGOs), universities or government agencies to progress the social well-being of local, regional and, sometimes, national communities. More grassroots efforts, called community building or community organizing, seek to empower individuals and groups of people by providing them with the skills they need to effect change in their own communities. These skills often assist in building political power through the formation of large social groups working for a common agenda. Community development practitioners must understand both how to work with individuals and how to affect communities' positions within the context of larger social institutions. Public administrators, in contrast, need to understand community development in the context of rural and urban development, housing and economic development, and community, organizational and business development.

Formal accredited programs conducted by universities, as part of degree granting institutions, are often used to build a knowledge base to drive curricula in public administration, sociology and community studies. The General Social Survey from the National Opinion Research Center at the University of Chicago and the Saguaro Seminar at the John F. Kennedy School of Government at Harvard University are examples of national community development in the United States. The Maxwell School of Citizenship and Public Affairs at Syracuse University in New York State offers core courses in community and economic development, and in areas ranging from non-profit development to US budgeting (federal to local, community funds). In the United Kingdom, the University of Oxford has led in providing extensive research in the field through its Community Development Journal, used worldwide by sociologists and community development practitioners.

At the intersection between community development and community building are a number of programs and organizations with community development tools. One example of this is the program of the Asset Based Community Development Institute of Northwestern University. The institute makes available downloadable tools to assess community assets and make connections between non-profit groups and other organizations that can help in community building. The Institute focuses on helping communities develop by "mobilizing neighborhood assets" – building from the inside out rather than the outside in. In the disability field, community building was prevalent in the 1980s and 1990s with roots in John McKnight's approaches.

In The Different Drum: Community-Making and Peace (1987) Scott Peck argues that the almost accidental sense of community that exists at times of crisis can be consciously built. Peck believes that conscious community building is a process of deliberate design based on the knowledge and application of certain rules. He states that this process goes through four stages:

Community building that is geared toward citizen action is usually termed "community organizing." In these cases, organized community groups seek accountability from elected officials and increased direct representation within decision-making bodies. Where good-faith negotiations fail, these constituency-led organizations seek to pressure the decision-makers through a variety of means, including picketing, boycotting, sit-ins, petitioning, and electoral politics.

Community organizing can focus on more than just resolving specific issues. Organizing often means building a widely accessible power structure, often with the end goal of distributing power equally throughout the community. Community organizers generally seek to build groups that are open and democratic in governance. Such groups facilitate and encourage consensus decision-making with a focus on the general health of the community rather than a specific interest group.

If communities are developed based on something they share in common, whether location or values, then one challenge for developing communities is how to incorporate individuality and differences. Rebekah Nathan suggests[according to whom?] in her book, My Freshman Year, we are drawn to developing communities totally based on sameness, despite stated commitments to diversity, such as those found on university websites. 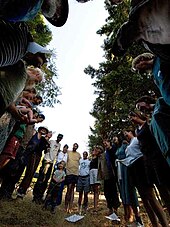 Participants in Diana Leafe Christian's "Heart of a Healthy Community" seminar circle during an afternoon session at O.U.R. Ecovillage

A number of ways to categorize types of community have been proposed. One such breakdown is as follows:

In response to these problems, Paul James and his colleagues have developed a taxonomy that maps community relations, and recognizes that actual communities can be characterized by different kinds of relations at the same time:

In these terms, communities can be nested and/or intersecting; one community can contain another—for example a location-based community may contain a number of ethnic communities. Both lists above can used in a cross-cutting matrix in relation to each other.

In general, virtual communities value knowledge and information as currency or social resource. What differentiates virtual communities from their physical counterparts is the extent and impact of "weak ties", which are the relationships acquaintances or strangers form to acquire information through online networks. Relationships among members in a virtual community tend to focus on information exchange about specific topics. A survey conducted by Pew Internet and The American Life Project in 2001 found those involved in entertainment, professional, and sports virtual-groups focused their activities on obtaining information.

An epidemic of bullying and harassment has arisen from the exchange of information between strangers, especially among teenagers, in virtual communities. Despite attempts to implement anti-bullying policies, Sheri Bauman, professor of counselling at the University of Arizona, claims the "most effective strategies to prevent bullying" may cost companies revenue.

Retrieved from "https://en.wikipedia.org/w/index.php?title=Community&oldid=1007466329"
Uses material from the Wikipedia article Community, released under the CC BY-SA 3.0 license.