The County Palatine of Durham was an area in the North of England that was controlled by the Bishop of Durham.

The History and Antiquities of the County Palatine, of Durham; by Will'm Hutchinson F.A.S. Vol. II; 1823

The territory was originally the Liberty of Durham under the control of the Bishop of Durham. The liberty was also known variously as the "Liberty of St Cuthbert's Land", "The lands of St. Cuthbert between Tyne and Tees" or "The Liberty of Haliwerfolc".

The bishops' special jurisdiction was based on claims that King Ecgfrith of Northumbria had granted a substantial territory to St Cuthbert on his election to the see of Lindisfarne in 684. In about 883, a cathedral housing the saint's remains was established at Chester-le-Street and Guthfrith, King of York granted the community of St Cuthbert the area between the Tyne and the Wear. In 995 the see was moved again to Durham.

Following the Norman invasion, the administrative machinery of government was only slowly extended to northern England. In the twelfth century a shire or county of Northumberland was formed, and Durham was considered to be within its bounds. However the authority of the sheriff of Northumberland and his officials was disputed by the bishops.

The crown still regarded Durham as falling within Northumberland until the late thirteenth century. Matters came to a head in 1293 when the bishop and his steward failed to attend proceedings of quo warranto held by the justices of Northumberland. The bishop's case was heard in Parliament, where he stated that Durham lay outside the bounds of any English shire and that "from time immemorial it had been widely known that the sheriff of Northumberland was not sheriff of Durham nor entered within that liberty as sheriff... nor made there proclamations or attachments". The arguments appear to have been accepted, as by the fourteenth century Durham was accepted as a liberty which received royal mandates direct. In effect it was a private shire, with the bishop appointing his own sheriff. The area eventually became known as the "County Palatine of Durham".

The Palatinate of Durham enjoyed the "highest liberty in private hands" during the Middle Ages. In England, "liberty" usually meant a territorial area that was, in some sense, free from royal jurisdiction. Most of these territorial liberties extended as far back as the Anglo-Saxon period. As a palatinate under ecclesiastical jurisdiction the Bishop of Durham enjoyed exemption from taxation and the right to pardon life and limb. Both Bracton and Blackstone considered the "right to pardon life and limb" the "essential mark" of a palatinate.

The term palatinus is applied to the bishop in 1293, and from the 13th century onwards the bishops frequently claimed the same rights in their lands as the king enjoyed in his kingdom.

The county was divided by the 13th century into four "wards" (equivalent to hundreds) named, after their chief towns, Chester-le-Street, Darlington, Easington and Stockton. Each had its own coroner and a three-weekly court.

Previously a liberty of Northumberland, the wapentake of Sadberge was purchased by bishop Hugh de Puiset in 1189 and gradually incorporated into the County Palatine; it retained separate assizes until 1586.

St Cuthbert and the haliwerfolc

During the medieval period, St Cuthbert became politically important in defining the identity of the people living in the semi-autonomous region. Within this area the saint became a powerful symbol of the autonomy the region enjoyed. The inhabitants of the Palatinate became known as the haliwerfolc, which roughly translates as "people of the saint", and Cuthbert gained a reputation as being fiercely protective of his domain.

For example, there is a story that at the Battle of Neville's Cross in 1346, the Prior of the Abbey at Durham received a vision of Cuthbert, ordering him to take the corporax cloth of the saint and raise it on a spear point near the battlefield as a banner. Doing this, the Prior and his monks found themselves protected "by the mediation of holy St Cuthbert and the presence of the said holy Relic." Whether the story of the vision is true or not, the banner of St Cuthbert was regularly carried in battle against the Scots until the Reformation, and it serves as a good example of how St Cuthbert was regarded as a protector of his people. 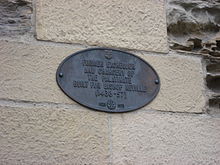 At its historic extent, Durham included a main body covering the Catchment of the Pennines in the west, the River Tees in the south, the North Sea in the east and the Rivers Tyne and Derwent in the north. The county had a number of exclaves: Bedlingtonshire, Islandshire and Norhamshire within Northumberland, and Craikshire within the North Riding of Yorkshire. In 1831 the county covered an area of 679,530 acres (2,750.0 km2) and had a population of 253,910.

The historic boundaries were used for parliamentary purposes until 1832, and for judicial and local government purposes until the coming into force of the Counties (Detached Parts) Act 1844, which merged most remaining exclaves with their surrounding county.

Until the 15th century the most important administrative officer in the palatinate was the steward. Other officers were the sheriff, the coroners, the chamberlain and the chancellor. The palatine exchequer was organised in the 12th century. The palatine assembly represented the whole county, and dealt chiefly with fiscal questions. The bishop's council, consisting of the clergy, the sheriff and the barons, regulated the judicial affairs, and later produced the Chancery and the courts of Admiralty and Marshalsea.

Durham city was captured by a Norman army in 1069. There was a rebellion against the new Norman earl Robert de Comines, who was killed. However, County Durham largely missed the Harrying of the North that was designed to subjugate such rebellions. The best remains of the Norman period are to be found in Durham Cathedral and in the castle, also in some few parish churches, as at Pittington and Norton in Stockton. Of the Early English period are the eastern portion of the cathedral, the churches of Darlington, Hartlepool, and St Andrew, Auckland, Sedgefield, and portions of a few other churches.

The prior of Durham ranked first among the bishop's barons. He had his own court, and almost exclusive jurisdiction over his men. There were ten palatinate barons in the 12th century, the most important being the Hyltons of Hylton Castle, the Bulmers of Brancepeth, the Conyers of Sockburne, the Hansards of Evenwood, and the Lumleys of Lumley Castle. The Nevilles owned large estates in the county. Raby Castle, their principal seat, was rebuilt by John Neville, 3rd Baron Neville de Raby in 1377.

Edward I's quo warranto proceedings of 1293 showed twelve lords enjoying more or less extensive franchises under the bishop. The repeated efforts of the Crown to check the powers of the palatinate bishops culminated in 1536 in the Act of Resumption, which deprived the bishop of the power to pardon offences against the law or to appoint judicial officers. Moreover, indictments and legal processes were in future to run in the name of the king, and offences to be described as against the peace of the king, rather than that of the bishop. In 1596 restrictions were imposed on the powers of the chancery, and in 1646 the palatinate was formally abolished. It was revived, however, after the Restoration, and continued with much the same power until 5 July 1836, when the Durham (County Palatine) Act 1836 provided that the palatine jurisdiction should in future be vested in the Crown. Doubts about the construction of this Act led to the enactment of the Durham County Palatine Act 1858.

During the Wars of the Roses, Henry VI passed through Durham. On the outbreak of the Great Rebellion Durham inclined to support the cause of Parliament, and in 1640 the high sheriff of the palatinate guaranteed to supply the Scottish army with provisions during their stay in the county. In 1642 the Earl of Newcastle formed the western counties into an association for the King's service, but in 1644 the palatinate was again overrun by the Scottish army, and after the Battle of Marston Moor fell entirely into the hands of Parliament.

In 1614 a bill was introduced in Parliament for securing representation to the county and city of Durham and the borough of Barnard Castle. The movement was strongly opposed by the bishop, as an infringement of his palatinate rights, and the county was first summoned to return members to Parliament in 1654. After The Restoration, both county and city returned two members each. By the Reform Act of 1832 the county returned two members for two divisions, and the boroughs of Gateshead, South Shields and Sunderland acquired representation. The boroughs of Darlington, Stockton and Hartlepool returned one member each from 1868 until the Redistribution Act of 1885.

Main article: Courts of the County Palatine of Durham

Retrieved from "https://en.wikipedia.org/w/index.php?title=County_Palatine_of_Durham&oldid=995029906"
Uses material from the Wikipedia article County Palatine of Durham, released under the CC BY-SA 3.0 license.