Crater Lake (Klamath: giiwas) is a crater lake in south-central Oregon in the western United States. It is the main feature of Crater Lake National Park and is famous for its deep blue color and water clarity. The lake partly fills a nearly 2,148-foot-deep (655 m) caldera that was formed around 7,700 (± 150) years ago by the collapse of the volcano Mount Mazama. There are no rivers flowing into or out of the lake; the evaporation is compensated for by rain and snowfall at a rate such that the total amount of water is replaced every 250 years. With a depth of 1,949 feet (594 m), the lake is the deepest in the United States. In the world, it ranks ninth for maximum depth, and third for mean (average) depth.

Since 2002, one of the state's regular-issue license plate designs has featured Crater Lake and a one-time plate surcharge is used to support the operation of Crater Lake National Park. The commemorative Oregon State Quarter, which was released by the United States Mint in 2005, features an image of Crater Lake on its reverse.

The lake and surrounding park areas offer many recreational activities including hiking, biking, snowshoeing, fishing, and cross-country skiing are available, and during the summer, campgrounds and lodges at Crater Lake are open to visitors.

Crater Lake is in Klamath County, approximately 60 miles (97 km) northwest of the county seat of Klamath Falls, and about 80 miles (130 km) northeast of the city of Medford.

The lake is 5 by 6 miles (8.0 by 9.7 km) across, with a caldera rim ranging in elevation from 7,000 to 8,000 feet (2,100 to 2,400 m) and an average lake depth of 1,148 feet (350 m). The lake's maximum depth has been measured at 1,949 feet (594 m), which fluctuates slightly as the weather changes. On the basis of maximum depth, Crater Lake is the deepest lake in the United States, the second-deepest in North America (after Great Slave Lake in Canada), and the ninth-deepest lake in the world. Crater Lake is often cited as the seventh-deepest lake in the world, but this ranking excludes Lake Vostok in Antarctica, which is beneath about 13,000 feet (4,000 m) of ice, and the recent depth soundings of O'Higgins/San Martín Lake, which is along the border of Chile and Argentina.

When considering the mean, or average depth of lakes, Crater Lake becomes the deepest lake in the Western Hemisphere and the third-deepest in the world. Crater Lake Institute Director and limnologist Owen Hoffman states "Crater Lake is the deepest, when compared on the basis of average depth among lakes whose basins are entirely above sea level. The average depths of Lakes Baikal and Tanganyika are deeper than Crater Lake; however, both have basins that extend below sea level." 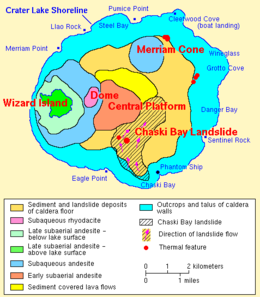 Geologic map of the lake floor 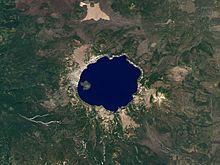 Mount Mazama, part of the Cascade Range volcanic arc, was built up mostly of andesite, dacite, and rhyodacite over a period of at least 400,000 years. The caldera was created in a massive volcanic eruption between 6,000 and 8,000 years ago that led to the subsidence of Mount Mazama. About 12 cubic miles (50 km3) of rhyodacite was erupted in this event. Since that time, all eruptions on Mazama have been confined to the caldera.

Eventually, the caldera cooled, allowing rain and snow to accumulate and form a lake. Landslides from the caldera rim thereafter formed debris fans and turbidite sediments on the lake bed. Fumaroles and hot springs remained common and active during this period. Also after some time, the slopes of the lake's caldera rim more or less stabilized, streams restored a radial drainage pattern on the mountain, and dense forests began to revegetate the barren landscape. It is estimated that about 720 years was required to fill the lake to its present depth of 1,949 feet (594 m). Much of this occurred during a period when the prevailing climate was less moist than at present.

Some hydrothermal activity remains along the lake floor, suggesting that at some time in the future, Mazama may erupt once again.

In 2008, scientists submerged a robot into the lake to collect more geological information to compare to the data obtained in the 1980s. The scientists hypothesized that the moss was about 6,000 years old by measuring the age of pollen that blew into the lake and mixed with the sediment.

Crater Lake features a subalpine climate, with the rare dry-summer type (Köppen classification Dsc) owing to its high elevation and – like all of Oregon – the strong summer influence of the North Pacific High. In the summer, the weather is mild and dry, but in the winter is cold and the powerful influence of the Aleutian Low allows for enormous snowfalls averaging 505 inches (12.83 m) per year and maximum snow cover averaging 139 in or 3.53 m. This snow does not usually melt until mid-July, and allows for substantial glaciers on adjacent mountains. In the winter of 1949/1950 as much as 885.1 inches (22.48 m) of snow fell, while the less complete snow cover records show cover as high as 192 in or 4.88 m occurred during another particularly unsettled winter in 1981/1982. The heaviest daily snowfall was 37.0 inches (94.0 cm), which occurred as recently as February 28, 1971; 20 in (51 cm) or more in one storm has occurred in both June and September. Hard frost is possible even into the summer, and the average window for freezing temperatures is August 19 through July 7, while for measurable (≥0.1 in or 0.25 cm) snowfall, October 1 through June 15. Surface temperatures of the lake range between 33 °F (1 °C) and 66 °F (19 °C). In the summer, the lake temperature falls between 50 °F (10 °C) and 60 °F (16 °C).

Since the collapse of Mount Mazama due to a volcanic eruption formed Crater Lake, no fish inhabited the lake until William G. Steel decided to stock it in 1888 to allow for fishing. Regular stocking continued until 1941, when it was evident that the fish could maintain a stable population without outside interference. Six species of fish were originally stocked, but only two species have survived: Kokanee Salmon and Rainbow Trout with Kokanee being the most plentiful. Fishing in Crater Lake is promoted because the fish species are not indigenous to the lake.

Crater Lake is also known for the "Old Man of the Lake", a full-sized tree which is now a log that has been bobbing vertically in the lake for over a century. The low temperature of the water has slowed the decomposition of the wood, hence its longevity.

In 1987, scientists sent a submersible down to the depths of Crater Lake to obtain more information about the geology at the bottom of the lake, and inspect moss samples found in moss beds as deep as 600 feet (180 m).

Due to several unique factors, mainly that the lake has no inlets or tributaries, the waters of Crater Lake are some of the purest in the world because of the absence of pollutants. Clarity readings from a Secchi disk have consistently been measured as being 120 ft (37 m), which is very clear for any natural body of water. In 1997, scientists recorded a record clarity of 142 ft (43 m).

The lake has relatively high levels of dissolved salts, total alkalinity, and conductivity. The average pH has generally ranged between 7 and 8. 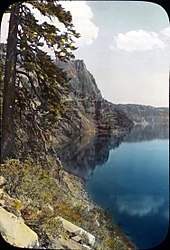 The Klamath tribe of Native Americans, whose oral history describes their ancestors witnessing the collapse of Mount Mazama and the formation of Crater Lake, regard the lake as an "abode to the Great Spirit". Klamath oral history tells of a battle between the sky god Skell and the god of the underworld Llao (a prominent feature at Crater Lake is Llao Rock). Mount Mazama was destroyed in the battle, creating Crater Lake, called giiwas in the Klamath language. The Klamath people used Crater Lake in vision quests, which often involved climbing the caldera walls and other dangerous tasks. Those who were successful in such quests were often regarded as having more spiritual powers. The tribe still holds Crater Lake in high regard as a spiritual site.

Located 56 miles (90 km) north of the city of Klamath Falls and 62 miles (100 km) northeast of Medford, Crater Lake can be reached from U.S. Route 97 on the east, on the southwest by Highway 62, and on the northwest by Highway 138. Crater Lake and the remnants of Mount Mazama can be seen from Rim Drive, a 33-mile (53 km) road that surrounds the caldera, which is the only part within the Crater Lake National Park where vehicles are permitted. The Garfield Peak Trail, which runs 1.5 miles (2.4 km) east from the Crater Lake Lodge, offers views from 1,900 feet (580 m) above the lake's surface, with Mount Shasta visible 125 miles (201 km) southward. Another trail runs for 2.5 miles (4.0 km) from Rim Drive's eastern edge to Mount Scott, which offers views of central and southern Oregon such as the Three Sisters located 80 miles (130 km) north of Mazama and Mount Thielsen, also to the north. The Cleetwood trail leads for 1 mile (1.6 km) down the northern flank of the caldera rim, eventually reaching Cleetwood Cove where boat trips run from late June or early July throughout the summer season to Wizard Island. Wizard Island can be climbed, offering views of Crater Lake.

Swimming is permitted in Crater Lake, but the only way to safely and legally get to the shore is by following Cleetwood Cove trail and people can enter the water from there. Other activities include fishing and a 2-hour boat tour around the lake provided by a Park Ranger from Crater Lake National Park.

As the region lies within a national park area, collecting rocks within the vicinity is prohibited unless a permit is obtained. The park's facilities lie at Rim Village, at the southern edge of the caldera. Lodging and camping facilities open during the summer season between May and October. No lodges, gas stations, or camping areas remain open from October through late May. Popular activities within Crater Lake National Park include biking, fishing, cross-country skiing, and snowshoeing.