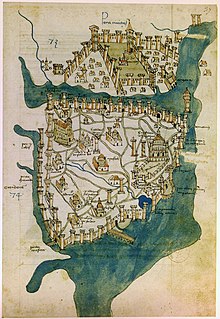 Map of Constantinople (1422) by Buondelmonti, contained in Liber insularum Archipelagi (Bibliothèque nationale de France, Paris) is the oldest surviving map of the city, and the only one which antedates the Turkish conquest of the city in 1453

Cristoforo Buondelmonti (1386 – c. 1430) was an Italian Franciscan priest and traveler, and a pioneer in promoting first-hand knowledge of Greece and its antiquities throughout the Western world.

He left his native city of Florence, in Tuscany, around 1414 CE in order to travel, mainly in the Aegean Islands. He visited Constantinople in the 1420s. He is the author of two historical-geographic works: the Descriptio insulae Cretae (1417, in collaboration with Niccolò Niccoli) and the Liber insularum Archipelagi (1420). These two books are a combination of geographical information and contemporary charts and sailing directions. The last one contains the oldest surviving map of Constantinople, and the only one which antedates the Ottoman conquest of the city in 1453.

While travelling over the island of Andros, he bought a Greek manuscript and brought back with him to Italy. This was the Hieroglyphica of Horapollo, which played a considerable role both in humanistic thinking and in art.