D'Angelo Danté Russell (born February 23, 1996) is an American professional basketball player for the Minnesota Timberwolves of the National Basketball Association (NBA). He was selected as a McDonald's All-American in 2014 and played college basketball for the Ohio State Buckeyes. He was the second overall pick in the 2015 NBA draft by the Los Angeles Lakers. Playing point guard, he was named to the NBA All-Rookie Second Team with the Lakers in 2016. He was traded to the Brooklyn Nets in 2017, and received his first All-Star selection in 2019. In the 2019 off-season he joined the Golden State Warriors via a sign-and-trade deal, and was then traded to the Timberwolves at the 2020 trade deadline. 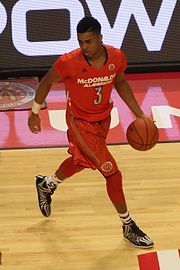 Russell during the 2014 McDonald's All-American Game

Russell attended Central High School in Louisville, Kentucky as a freshman in 2010–11, before transferring to Montverde Academy in Montverde, Florida for his sophomore season. In 2014, he helped Montverde win back-to-back High School National Tournament championships playing alongside Ben Simmons. He later played in the McDonald's All-American Game and Jordan Brand Classic.

Russell committed to Ohio State on June 7, 2013, choosing the Buckeyes over Louisville, Michigan State and North Carolina. Russell was rated by Rivals.com as a five-star recruit.

Russell played one season of college basketball for the Ohio State Buckeyes. On January 9, 2015, he recorded a career-high 14 rebounds in a win over Maryland, later scoring a career-high 33 points in a win over Northwestern on January 21. On February 8, in a 79–60 win over Rutgers, Russell recorded a triple-double with 23 points, 11 rebounds and 11 assists. This was the first triple-double recorded by an Ohio State freshman. During the NCAA Tournament, Russell scored 28 points in a 75–72 overtime win over VCU. However, the Buckeyes' season ended the following round with a 73–58 loss to Arizona. Russell earned the Oscar Robertson Trophy, Wayman Tisdale Award and Jerry West Award. He was named a consensus first-team All-American, as well as first-team All-Big Ten and Big Ten Freshman of the Year. In 35 games for Ohio State in 2014–15, Russell averaged 19.3 points, 5.7 rebounds, 5.0 assists and 1.6 steals in 33.9 minutes per game.

On April 22, 2015, Russell declared for the NBA draft, forgoing his final three years of college eligibility. He was touted by many scouts and reporters to be one of the top prospects in the 2015 draft.

Russell with the Lakers in December 2015

On June 25, 2015, Russell was selected by the Los Angeles Lakers with the second overall pick in the 2015 NBA draft. In his debut for the Lakers in their season opener on October 28, 2015, Russell recorded four points, three rebounds and two assists in just under 26 minutes in a 112–111 loss to the Minnesota Timberwolves. On December 4, he recorded his first career double-double with 16 points and 10 rebounds in a 112–111 loss to the Atlanta Hawks. On January 7, 2016, he scored 11 of his 27 points in the fourth quarter of the Lakers' 118–115 loss to the Sacramento Kings. Russell participated in the 2016 Rising Stars Challenge, where he recorded 22 points and seven assists in Team USA's win over Team World. On March 1, he set career highs with 39 points and eight three-pointers in a 107–101 win over the Brooklyn Nets. His 39 points were the most by any rookie in 2015–16 and the most by a Lakers rookie in a regular season game since Elgin Baylor had 55 in March 1959. His eight three-pointers broke Nick Van Exel's previous rookie Laker record of six in a single game. He finished the 2015–16 season leading the Lakers and all rookies in steals per game, and became the youngest player to hit 130 three-pointers in a season. He subsequently earned NBA All-Rookie Second Team honors.

In the Lakers' season opener on October 26, 2016, Russell scored 20 points in a 120–114 win over the Houston Rockets. On November 15, he scored a then season-high 32 points in a 125–118 win over the Nets. He missed time between November and January with knee and calf injuries. On January 31, he recorded his second career double-double with 22 points, a career-high 10 assists and seven rebounds in his return from a three-game absence with a pair of mild leg injuries, helping the Lakers defeat the Denver Nuggets by a score of 120–116. He set a new career high for assists with 11 against the Washington Wizards the following game on February 2. On March 19, he scored a career-high 40 points in a 125–120 loss to the Cleveland Cavaliers. 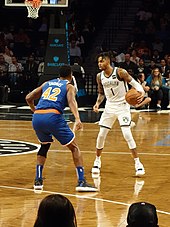 Russell with the Nets in October 2018

On June 22, 2017, Russell was traded, along with Timofey Mozgov, to the Brooklyn Nets in exchange for Brook Lopez and the rights to Kyle Kuzma, the 27th pick in the 2017 NBA draft. In his debut for the Nets in their season opener on October 18, 2017, Russell had 30 points and five assists in a 140–131 loss to the Indiana Pacers. On October 31, he scored a season-high 33 points in a 122–114 loss to the Phoenix Suns. On November 17, he underwent arthroscopic surgery on his left knee and was subsequently ruled out indefinitely. He returned to action against the Miami Heat on January 19, playing 14 minutes after missing 32 games. He went 0-for-5 from the field in a 101–95 win. On January 31, in his best performance since knee surgery, Russell scored 22 points in a 116–108 win over the Philadelphia 76ers. On February 14, he recorded 18 points and nine assists off the bench in a 108–103 loss to the Indiana Pacers, becoming the first Nets player to notch 15+ points and 5+ assists off the bench in three straight games since Orlando Woolridge in 1986–87. On February 22, he started for the first time since November 11 and scored 19 points on 7-of-16 shooting in a 111–96 loss to the Charlotte Hornets. On February 27, he had a 25-point effort in a 129–123 loss to the Cleveland Cavaliers. On March 13, he scored 24 of his 32 points in the first quarter of the Nets' 116–102 loss to the Toronto Raptors. Russell's 24 points in the first quarter were the most by a Net in the opening period since Vince Carter's 24 on April 4, 2005, against Boston. On March 23, he recorded his first career triple-double with 18 points, 13 assists and 11 rebounds in a 116–112 loss to the Raptors. Russell's triple-double was the first for the Nets since Terrence Williams had one against Chicago on April 9, 2010.

Russell helped the Nets finish the regular season as the sixth seed in the Eastern Conference with a 42–40 record. In Game 1 of the Nets' first-round playoff series against the Philadelphia 76ers, Russell scored 26 points in his postseason debut to lead Brooklyn to a 111–102 win.

On June 28, 2019, the Nets extended a qualifying offer to Russell in order to make him a restricted free agent.

On July 7, 2019, Russell was sent to the Golden State Warriors as part of a sign-and-trade package for Kevin Durant. On November 8, Russell scored a career-high 52 points on 37 shots in a 125–119 overtime loss to the Minnesota Timberwolves.

On February 6, 2020, Russell was traded to the Minnesota Timberwolves along with Jacob Evans and Omari Spellman for Andrew Wiggins, a protected future first-round draft pick, and a future second round draft pick. He debuted for Minnesota four days later, recording 22 points and five assists in a 137–126 loss to the Toronto Raptors. On February 23, he sat out the first game of a back-to-back against the Denver Nuggets to rest his sore knee. Since the game was nationally televised on NBA TV, the visiting Timberwolves were deemed to have violated the NBA's policy against resting healthy players and fined $25,000, becoming the first team to be fined since the policy was instituted in 2017.