Food produced from or containing the milk of mammals

Dairy products are derived from milk. 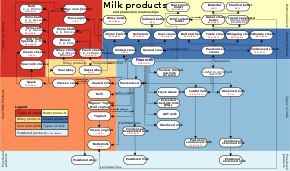 Dairy products or milk products are a type of food produced from or containing the milk of mammals, most commonly cattle, water buffaloes, goats, sheep, and camels. Dairy products include food items such as yogurt, cheese and butter. A facility that produces dairy products is known as a dairy, or dairy factory. Dairy products are consumed worldwide, with the exception of most of East and Southeast Asia and parts of central Africa. 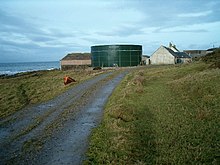 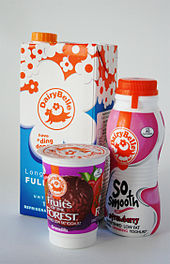 Three South African dairy products: a box of long-life milk, a bottle of strawberry drinking yogurt, and a carton of passionfruit yogurt

Milk is produced after optional homogenization or pasteurization, in several grades after standardization of the fat level, and possible addition of the bacteria Streptococcus lactis and Leuconostoc citrovorum. Milk can be broken down into several different categories based on type of product produced, including cream, butter, cheese, infant formula, and yogurt.

Milk is an ingredient in many confectioneries. Milk can be added to chocolate to produce Milk chocolate.

Cheese, produced by coagulating milk, separating from whey and letting it ripen, generally with bacteria and sometimes also with certain molds.

Excessive consumption of dairy products can contribute significant amounts of cholesterol and saturated fat to the diet, which can increase the risk of heart disease, and cause other serious health problems.

There is no excess cardiovascular risk with dietary calcium intake, but calcium supplements are associated with a higher risk of coronary artery calcification.

Consumption of dairy products does not cause mucus production, and will not make cold or asthma symptoms worse. This widely held belief stems from some people mistaking the thin coat of residue left behind after consuming milk or ice cream for mucus.

Religious – Some religions restrict or do not allow for the consumption of dairy products. For example, some scholars of Jainism advocate not consuming any dairy products because dairy is perceived to involve violence against cows. Orthodox Judaism requires that meat and dairy products not be served at the same meal, served or cooked in the same utensils, or stored together, as prescribed in Deuteronomy 14:21.

Vegans – Veganism is the avoidance of all animal products, including dairy products, most often due to the ethics regarding how dairy products are produced. The ethical reasons for avoiding meat and dairy products include how dairy is produced, how the animals are handled, and the environmental effect of dairy production. According to a report of the United Nations’ Food and Agriculture Organization in 2010 the dairy sector accounted for 4 percent of global man-made greenhouse gas emissions.