The original cheerleading squad was made up of a male-female group called the "CowBelles & Beaux". The group made its sidelines debut in 1960 during the Cowboys' inaugural season. Local high school students made up the squad, which was typical of high school and college cheerleading squads throughout the 1960s, rarely getting much attention.

During a game between the Cowboys and the Atlanta Falcons at the Cotton Bowl during the 1967 season, the scantily clad, well-endowed Bubbles Cash, a stripper by profession, caused a tremendous stir in the crowd that turned to cheers when she walked down the staircase stands on the 50-yard line carrying cotton candy in each hand. She became an instant public sensation in Dallas, also gaining attention from Cowboys General Manager Tex Schramm. Understanding the importance of the entertainment industry to the Cowboys' profitability, Schramm was inspired to form a cheerleading squad dressed in similar fashion to Cash. By 1969, it was decided that the cheerleading squad needed this new image. The male cheerleaders were dropped from the squad, and an all-female squad from local high school cheerleading squads in the Dallas-Fort Worth area was selected. From that point on, the "CowBelles & Beaux" became the "Dallas Cowboys Cheerleaders", with new members added every year.

Preparing for the 1970 season, Schramm decided to change the Cheerleaders' image to boost attendance. At first the main change was to create an all-female squad and change the uniforms and style of cheerleading routines to be primarily dance and less like traditional acrobatic routines like that of high school or college cheerleading squads. The ten local high school cheerleaders who were selected for the 1970 season were also involved in the task of totally redesigning the uniforms and creating new dance style cheer routines under Dee Brock's direction and with the help of a choreographer. In 1971, the qualification rules changed to allow not only local female cheerleaders to compete for a spot on the squad, but also high school drill team officers. Then in 1972, Texie Waterman, a New York choreographer, was recruited and assigned to auditioning and training an entirely new female squad who would all be over 18 years of age, searching for attractive appearance, athletic ability, and raw talent as performers. Since the 1972 squad consisted of adults, this allowed the possibility of again redesigning the uniforms to introduce a more revealing look (most notably transitioning from the traditional cheerleader skirt to hot pants) closer to the classic DCC image that is known today. This modified squad first appeared on the sidelines during the Cowboys' 1972 season.

Even greater national attention came in the fall of 1977 when the Cowboys, along with designer and photographer Bob Shaw, produced the first NFL cheerleader poster for the Dallas Cowboys. This, and an Esquire magazine article by Shaw in October 1977, led to the squad appearing on two network TV specials, NBC Rock-n-Roll Sports Classic and The Osmond Brothers Special on ABC. Also that year, the DCC produced their own one-hour special, The 36 Most Beautiful Girls in Texas, which aired on ABC prior to the season opener of Monday Night Football (which coincidentally was a game that the Cowboys hosted). On 14 January, 1979, the made-for-TV movie The Dallas Cowboys Cheerleaders aired. Starring Bert Convy and Jane Seymour, it had a 48% share of the national television audience. 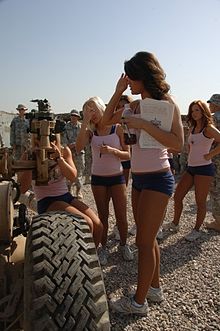 Part of the DCC squad visiting Iraq, with one of their squad members looking through the sights of a modern-day Howitzer.

On 13 January, 1980, a sequel to the original TV movie, The Dallas Cowboys Cheerleaders II, aired. The Cheerleaders have made many other TV appearances since then, and their likeness has been featured on various merchandise, such as posters, T-shirts, trading cards, and calendars.

The DCC has also toured throughout the United States (on and off the field), as well as overseas. Included in these tours are regular appearances in United Service Organizations (USO) tours, which began during the 1979 holiday season for U.S. troops stationed in South Korea.

The DCC releases several calendars every year. More recently, in addition to their annual swimsuit calendar, they also release an annual "sideline calendar," featuring photos of the DCC cheering and performing at Cowboys home games.

The DCC held a ceremony inaugurating the second game of the 1994 FIFA World Cup between Spain and South Korea.

Since 2006, the Cheerleaders have produced their own reality television series, Dallas Cowboys Cheerleaders: Making the Team, which airs on Country Music Television (CMT) during the NFL football season. The series follows the auditioning process of the annual squad.

The DCC received the FIFA delegation to promote the 2022 FIFA World Cup.

The DCC also held an opening ceremony and podium at the 2013 and 2018 United States Grand Prix races in Austin, Texas.

The uniform itself is a carefully guarded trademark and may not be duplicated in any way without the written permission of the DCC. The internationally recognized ensemble of a blue blouse, a white fringed vest with blue stars, and white hot pants with a white belt with blue stars was originally designed by Paula Van Waggoner.

Since first introduced with the formation of the squad in 1972, the basic uniform has been modified only six times:

Each modification has been approved by Director Kelli McGonagill Finglass and implemented by Leveta Crager, who for 24 years made and hand tailored every uniform worn by a DCC. Upon her retirement, at the start of the 1996 season, designer Greg Danison was chosen to continue the tradition of individual craftsmanship.

In February 2018, two uniforms worn by former DCCs—a current-generation uniform and a prior-generation (1970s-80s) uniform—were donated to the National Museum of American History (part of the Smithsonian Institution) in Washington, D.C., along with their respective-generation boots and pom-poms. Other items donated include DCC Barbie dolls, a sketch of the DCC uniform, and the DCC's iconic 1977 poster.

Along with their two TV movies, the DCC has also appeared on numerous TV shows and specials as performers, guest acting roles, and game show contestants. Some of the shows on which they have appeared include:

The squad also produces its own reality television series Dallas Cowboys Cheerleaders: Making the Team, which aired for each season since 2006. The series, which airs on CMT during the NFL season, chronicles the audition process and performer selection for each season's squad.

Many former DCCs have gone on to achieve success in show business and other notable endeavors. They include: