David Daniel Rose (June 15, 1910 – August 23, 1990) was an American songwriter, composer, arranger, pianist, and orchestra leader. His best known compositions were "The Stripper", "Holiday for Strings", and "Calypso Melody". He also wrote music for many television series, including It's a Great Life, The Tony Martin Show, Little House on the Prairie, Highway to Heaven, Bonanza, and Highway Patrol under the pseudonym "Ray Llewellyn." Rose's work as a composer for television programs earned him four Emmys. In addition, he was musical director for The Red Skelton Show during its 21-year run on the CBS and NBC networks. He was a member of Phi Mu Alpha Sinfonia, the national fraternity for men in music.

Rose was born in London, to Jewish parents, and raised in Chicago, Illinois. The family name was originally Rosenberg. Rose's career in music began when he worked with Ted Fio Rito's band when he was sixteen. Rose also worked as a standby pianist for NBC Radio. It was here, in the early 1930s, that he first gained a reputation, while arranging for the Frank Trumbauer orchestra and later leading a house band at station WGN. He composed several early swing originals such as "Break It Down" with Frankie Trumbauer, "Transcontinental," "Plantation Moods," and a piece recorded under three different titles: "I've Got It", "Itchola", and "Jigsaw Rhythm," his original version with the WGN band including Louis Prima.

Rose was asked to work in Hollywood, where he formed his orchestra, doing a twice-weekly radio show for Mutual Broadcasting System called California Melodies, writing all the broadcast arrangements. He worked his way up to becoming music director of the Mutual network. Rose's first try at composing was his hit song "Holiday for Strings". During World War II, Rose entered the Army, first meeting Red Skelton while both were enlisted. Skelton asked Rose to become the conductor for his Raleigh Cigarette Program. Rose joined the cast in 1948 and worked with Skelton on his television show for over 20 years.

In 1942, Rose and his orchestra provided the music for Tune Up, America! on Mutual. The program provided "recognition of the efforts of women engaged in war work."

In 1955, Rose was commissioned by MGM Studios to compose the score for their forthcoming science fiction project Forbidden Planet. The music was completed and recorded and (based on the surviving track) it combined conventional instrumentation with some electronic elements. However, Rose was discharged from the project at the end of 1955 after the producers heard the electronic music of Louis and Bebe Barron and hired them to provide the final all-electronic soundtrack. A 7" single of Rose's unused theme from the film (backed by Bronislaw Kaper's theme for the MGM film The Swan, 1956) was released during 1956 on MGM Records, on which it was credited as being "inspired" by the film. Rose reportedly later destroyed all the original session recordings of his Forbidden Planet music.

In 1957, his rendition of Larry Clinton's "Calypso Melody" became Rose's second million selling record, and was awarded a gold disc.

"The Stripper", released in 1962, was composed by Rose in 1958 for a television special saluting burlesque. The song featured especially prominent trombone lines, giving the tune its lascivious signature, and evokes the feel of music used to accompany burlesque striptease artists. Four years after the song was recorded, MGM Records wanted to rush-release Rose's recording of "Ebb Tide" as a 45-rpm single, but needed a B-side. An office boy went through some of Rose's tapes searching for one, and "The Stripper" was chosen. It became a surprise hit, receiving much radio play.

"Holiday for Strings" became well known as the theme for Red Skelton's programs. A parody version, retitled "Holiday for States", was recorded as a vocal by Allan Sherman, with the straight melody but with ersatz lyrics consisting solely of the names of the American states.

Rose with one of his miniature trains in 1959 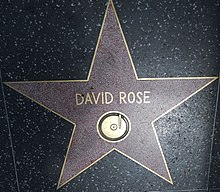 Star on the Hollywood Walk of Fame at 6514 Hollywood Blvd

Rose was married on October 8, 1938, to actress Martha Raye. They were divorced on May 19, 1941. Rose was married for a second time, on July 28, 1941, to actress and singer Judy Garland. They had no children, though Garland, according to biographer Gerald Clarke, underwent at least one abortion during the marriage, at the insistence of her mother, her husband, and the studio that employed her, MGM. Garland and Rose divorced in 1944.

He had two daughters with his third wife. His granddaughter is singer-songwriter Samantha James.

Rose was a live steam hobbyist, with his own backyard railroad.

Rose died in Burbank, California at the age of 80 of a heart attack. He was buried in Mount Sinai Memorial Park Cemetery in Hollywood Hills, California.