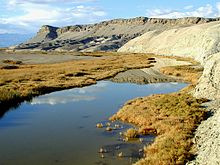 The males turn bright blue during mating season, April through October. The pupfish can withstand harsh conditions that would kill other fish: water that is 4 times more saline than the ocean, hot water up to 116 °F (47 °C), and cold water down to 32 °F (0 °C).

This species is known from only two locations in Death Valley: Salt Creek (subspecies salinus) at about 49 m (161 ft) below sea level, and Cottonball Marsh (subspecies milleri), at about 80 m (260 ft) below sea level. They are thought to be the remainders of a large ecosystem of fish species that lived in Lake Manly, which dried up at the end of the last ice age leaving the present-day Death Valley.

The desert pupfish has been classified as endangered by the IUCN because of its extremely restricted distribution (if the two extant locations were treated as a single unit, it would be considered critically endangered). Numbers of individuals at the locations are highly seasonally variable, and fluctuate with water level and flow volume. While the entire range of the species is located in a protected area, it may be under threat from accidental introduction of non-native species, local catastrophic events, and excessive pumping of the aquifer that feeds the habitat.