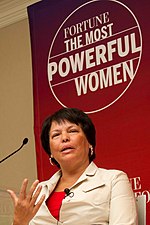 Debra L. Lee (born August 8, 1954) is an American businesswoman. She was the Chairman and Chief Executive Officer of BET, the parent company for Black Entertainment Television from 2005 to May 28, 2018. Lee has sat on the board of directors for a number of companies/organizations, including the National Cable & Telecommunications Association the Ad Council, and the National Cable Television Association. Debra Lee is named one of the "100 Most Powerful Women in Entertainment" by The Hollywood Reporter due to her many achievements in her 30-plus year career at BET.

Debra L. Lee was born in Fort Jackson, South Carolina and grew up in Birmingham, Alabama. She attended James B. Dudley High School. In 1976, Lee graduated from Brown University with a bachelor's degree in political science with an emphasis in Asian politics. She went on to earn a master's degree in public policy from Harvard University's John F. Kennedy School of Government and a J.D. degree at Harvard Law School, where she was a member of the Board of Student Advisers, in 1980.

From August 1981 through September 1981, Lee served as a law clerk to Barrington Parker of the U.S. District Court for the District of Columbia. Lee joined BET as Vice President of BET's legal affairs department and general counsel in 1986 after over five years as an attorney with Washington, D.C. based Steptoe & Johnson, a corporate law firm. She has also served as BET's corporate secretary and president and publisher of BET's publishing division, which published Emerge, YSB, BET Weekend and Heart & Soul magazines.

As CEO of BET Holdings

Under Lee, Black Entertainment Television has begun to move in a different format direction for the network. She increased the production budget by 50% and looked into incorporating original programming by getting 16 new shows for the new 2007 season. Lee has also redesigned BET's mission statement by supporting families, encouraging their dreams, and presenting fresh talent by creating new shows for its network. She created a new entertainment network, CENTRIC, in September 2009 that features new artists, reality shows, and movies.

Lee serves on board of directors of Marriott, and Revlon. Lee is also a director of Washington Gas Light Company, WGL Holdings (since 2000) and the Monsanto subsidiary Genuity. In May 2016, Lee was added to the board of directors of Twitter, following an attempt by returning CEO Jack Dorsey to boost diversity across the social media company's board.